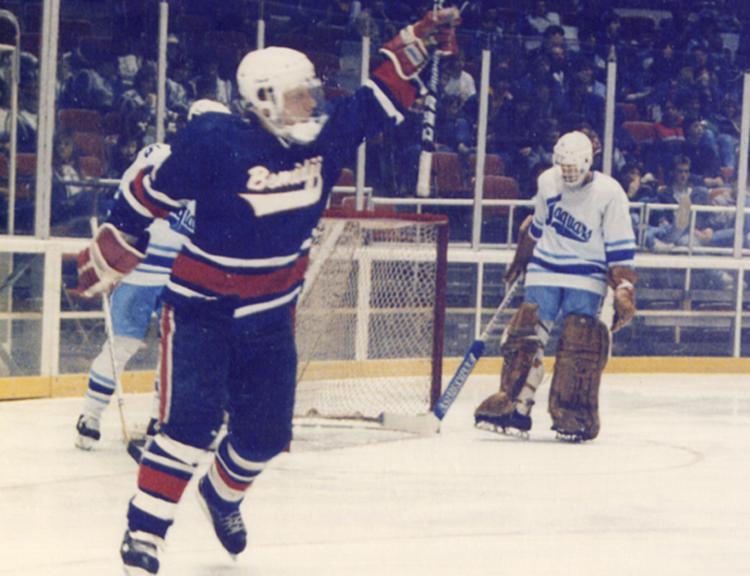 I was 13 years old in the summer of 1986 when I first saw George Pelawa in person.

I was at Bemidji Hockey Camp, an annual trek for me and my hockey-playing buddies. As we were tying our skates to hit the  ice, George had just come off the ice and was getting undressed. I am not sure if he was training after being a first-round draft pick or if he was helping out with Bob Peters for his camp.

What I did know was that his right thigh was as big as my entire
body.

I elbowed my buddy sitting next to me and said, “Hey, look … that’s George Pelawa. That’s Mr. Hockey!”

For a 13-year-old hockey nut, George Pelawa was larger than life. He was the best 18-year-old player in the state, maybe the country and perhaps the entire world. And there he was, a few feet away from me.

Could I become him someday?

We wanted to be the best – just like him.

“He was so big and so fast,” said his former linemate, Jason Meyer, now 51. “But he wasn’t just the fastest skater on our team.”

That spring in the Maroon and Gold series, a now defunct post-season all-star game, Pelawa was the fastest on the ice.

“He blew away those who were watching the game,” Meyer said. “How can he be that big and that fast? I remember Lou Nanne saying he was like a 747 – you don’t realize how fast he is going because he is so big.”

He had the size, power and speed that scouts lauded over, especially in the era of the NHL when those traits paid big dividends on the ice. It was the reason the Calgary Flames took him in the first round of the draft. .

“Size, power and a heavy shot,” Meyer said to describe his linemate. “He wouldn’t dangle guys. He would just go around them. And in the corners, I’d watch guys sidestep him when they knew he was behind them. They had no interest going into the corner with him. But he was never a dirty player. He was just determined not to let anybody stop him.”

Pelawa’s athletic prowess extended far beyond the hockey rink. As a lefthanded hitter he wreaked havoc on pitchers, and as a linebacker and running back, his size and speed transferred to the gridiron and drew the attention of Division I football programs.

“They couldn’t catch him on the football field either,” said Meyer. “And if they did, he’d just run over them.”

But hockey was his love, and it was his best sport.

As juniors, Meyer and Pelawa skated on the third line and it was their goal to make it to state. They did. As seniors, their goal was to win state. They got upset by Hibbing in the quarterfinals and won the consolation title.

But if anything, the state tourney gave Pelawa the stage for all hockey fans to see, and what they witnessed was something unique.

His talents had Division I coaches drooling and he decided that the University of North Dakota would be the best fit. The year he graduated, the Fighting Sioux were on the brink of a national
championship. The following winter Tony Hrkac and Bob Joyce set the college hockey world on fire with Joyce scoring 52 goals and Hrkac winning the Hobey Baker Award with 116 points in 48 games. Their projected linemate was George Pelawa.

“George would’ve been an integral part of that team,” said Meyer. “You put him on that line as a freshman and they would’ve been 50 percent better than they already were.”

Of course, that never came to fruition.

That’s because George would never step foot in a college classroom. Late that summer, the Bemidji community and the hockey world would receive devastating news 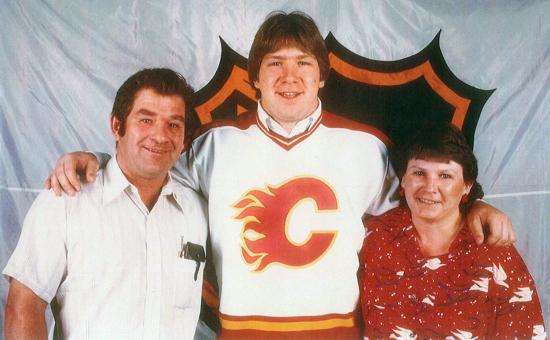 Frank, George and Winnie Pelawa after George was selected in the first round of the 1986 NHL Draft by the Calgary Flames.

Frank and Winnie Pelawa have a hard time holding back the tears, even 32 years after they heard the dreaded news.

The police had come to their house in the early morning hours of August 30, 1986. George and his brother Joe had been in an accident. Tragically, George was killed.

Frank and Winnie visit their son’s gravesite often. The base of his tombstone is lined with hockey pucks and baseballs. Friends are known to visit frequently as well, usually on his birthday or the anniversary of his death.

For Frank and Winnie, the legacy of their youngest son lives on, both through memories of his short 18 years on earth and through a scholarship initially funded by the Calgary Flames, who chose him in the first round of the 1986 draft.

The scholarship still exists today, as does a Bantam AA tournament named in his memory.

Mike Amble was a Bantam teammate of George.

“He played center with me and when he wasn’t playing center he would play D,” said Amble. “We wanted him on the ice as much as
possible.”

Amble didn’t play in high school, but remembers witnessing the combination of skill and speed that George possessed.

“He always had those big Jofa skates,” he recalled. “At the beginning of his junior year he really started to roll and people recognized and said, hey I think we have something here.”

Amble described George as a “gentle giant” who would visit the elementary school and flex his biceps.

“The kids would grab onto his big arms and hang off them,” he said.

Amble was with George earlier in the evening on the night he died.

“The Sheriff’s Department came to our house around 5 a.m. because they thought maybe I was with him. A few hours later, Frank called. It was a complete shock.”

The news traveled fast. Radio stations picked up on it and it was broadcast not just statewide, but nationally.

“It was awful for everybody. Anytime something like that happens to a young person it’s just awful,” he said. “But because of him being in sports, the community knew him better than most kids. Everyone felt so bad for his family. It just hit so hard. You can’t believe something like that could happen, but it did.”

Coach Grand remembers George as a happy-go-lucky kid who not only loved to play sports, but loved to hunt, fish and four-wheel.

“He had lots of different friends from all sports and enjoyed all things that young kids enjoyed,” he said.

On the ice, Grand remembers a player who was unmatched.

“There wasn’t a high school player like him up until then and I don’t know if there has been one since,” he said. “He had the combination of size, speed and skill.”

Coach Grand said when George found himself in the wrong spot on the ice, it didn’t matter.

“I used to tease him that he could be in the wrong place and something good would still happen,” he said. “He never had to worry about anybody getting the best of him. He was easy to coach, I just had to play him a lot!”

Rob Aitken was the first recipient of the George Pelawa Scholarship in 1987. Aitken played with Gorge but not on the same line.

“My job was to not let the other team score so George could rest,” he said. “But one time we were on the ice together and he assisted on one of my goals.”

It’s memories like that, albeit trivial at the time, that live on in the hearts and minds of his teammates, friends and family.

Aitken tells the story of the time a car pulled up to the bus carrying the Bemidji junior varsity team. The varsity team wasn’t on the bus yet, so this group of kids were jeering the JV guys about how bad they were.

“George walked out of the locker room, set his bag down and got in their face,” said Aitken. “The car sped away.”

Aitken said George stood up for the JV guys.

“He didn’t look down on them,” he said. “He promoted them. Our JV guys knew George had their back.”

For Aitken, that memory embodies what type of person George was.“

That encapsulates who he was,” he said. “He always had your back both on and off the ice.”

Aitken also remembers being on stage with George. The two were in choir together. Aitken will be performing the national anthem for Hockey Day Minnesota ceremonies this weekend in Bemidji. He wishes George was there with him.

“If it wasn’t me, I guarantee it would be George singing,” he said.

George won’t be singing the national anthem, but it doesn’t mean his presence isn’t felt.

It’s been 32 years since he passed.

Personally, I remember being at my uncle’s softball tournament when it came over the airwaves. George Pelawa, Mr. Hockey in Minnesota, had died.

It choked me up as a 13-year-old. It still chokes me up today. What a talent. What a human being.

He was somebody us kids all looked up to. We wanted to be him.

It’s sad to wonder what would have become of his career. Realistically, he might have been a hall of famer.

We will never know.

But we do know that in his 18 years on earth he was like no other.

He was and still is a legend.

And legends live on forever. 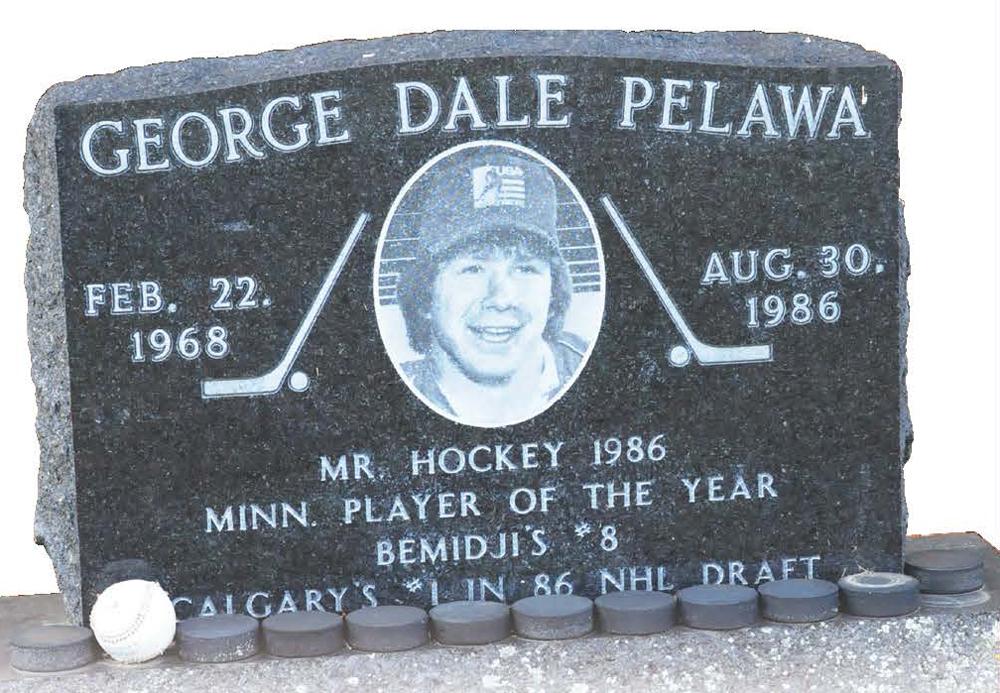