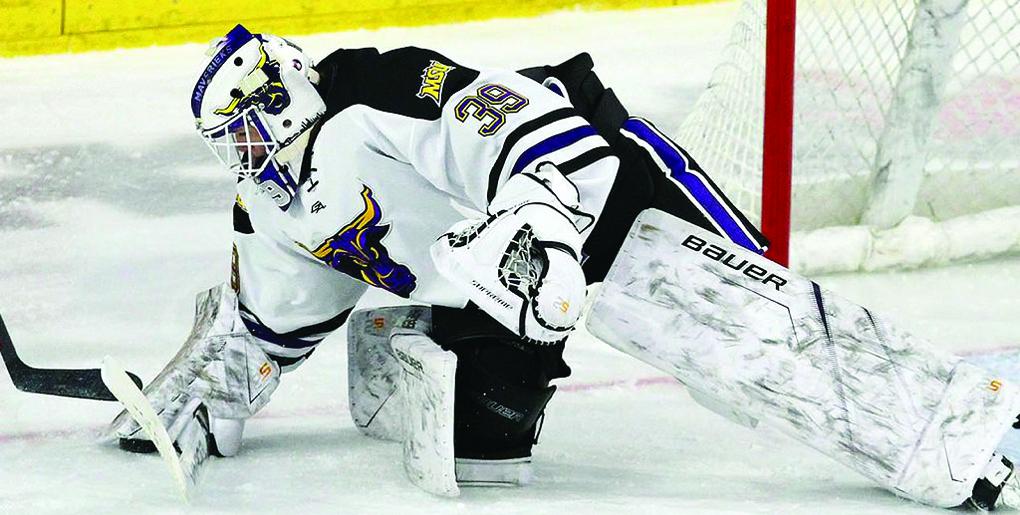 Even though the Minnesota State women’s hockey team was on the road in Columbus, Ohio on Dec. 2, when Ohio State sniper Tatum Skaggs lit the lamp at the 7:42 mark of the first period, everyone inside of the rink got on their feet and recognized what had just happened. It wasn’t the goal that made Mavericks and Buckeye fans come together for that one moment in time, but rather what the goal represented. The OSU goal was their first of the weekend. It was also the first goal MSU freshman goaltender Abigail Levy had given up in over 218 minutes of hockey. That’s not a typo – 218 minutes of out-of-this-world goaltending from a rookie netminder who has taken the conference by storm.

The night before, Levy strolled off the ice having just shut out Ohio State – one of the most dangerous offensive teams in the nation. The Mavericks’ 3-0 win marked Levy’s third straight shutout and her fifth this season. The fifth shutout of her rookie campaign tied the school record for most shutouts in a season and the win was MSU’s fourth straight victory for their first four-game winning streak since the 2010-11 campaign.

After stopping all 41 shots she saw, the performance also improved on her conference-leading save percentage which was already hovering near 96 percent. Then on Sunday, the Congers, N.Y., native made 38 saves on 40 shots. Despite the Maverick loss (2-0), it was just another reminder as to why MSU is no longer a bump in an opponent’s schedule.

Now 8-7-3 overall and 3-7-2 in the WCHA, Minnesota State has already surpassed last season’s win total of five and looks to be a serious threat from this point forward. And while it starts and ends with Levy in net, the Mavericks as a whole have been suffocating on the defensive side of the puck, especially since their 4-0 loss to Ohio State on Oct. 12. Since that setback, MSU has given up 21 goals in 15 games and are now second in the WCHA in team defense.

Even better than that is what the Mavericks are doing on the penalty kill. Operating at a clip of 91.9 percent, Skaggs’ power-play tally against Levy and company was just the fifth goal their opponents have scored against MSU with the extra skater all year. The Mavericks are not only first in the conference in penalty kill percentage, but also tied for third in the nation.

“Abigail has been unreal for us this year and she is what keeps us in the game most of the time,” MSU senior defenseman Megan Hinze said. “She makes unreal saves. Being on defense, we are always told that we are first-layered goalies and we kind of take that to heart. Coach always tells us that courage is key to how we play and being able to sacrifice yourself when needed. When you  do something like block a shot, that’s like making a play. It’s going to help your team in ways that maybe a goal will. It’s going to prevent a goal from happening. It’s going to make the puck go the opposite direction. That’s someone sacrificing themselves for the team to make something happen.”

Things are happening alright. Of their eight wins, three have come against conference foes Ohio State, St. Cloud State and Bemidji State. With three months left to go, the three WCHA victories have already tied their conference win total from the entire 2017-18 season. Individually, Levy has been awarded weekly conference honors five times already (WCHA Goaltender of the Week three times, WCHA Rookie of the Week twice) including her most recent honor that was bestowed on her after the Mavericks' split with the Buckeyes. If that’s not enough resume building material, Levy was named WCHA Goalie of the Month for October and November.

Along with being first in the conference in save percentage, the freshman phenom is tied for second in goals-against average (1.42) and fifth in winning percentage (.528).  In a conference that has seen its fair share of dominating goaltenders, Levy’s performances have already thrown her name into the conversation.

It’s something head coach John Harrington didn’t necessarily see coming right away, but at the same time, it doesn’t surprise him either. Blessed with size and a quick snap to her glove, Harrington thinks Levy’s best quality is what you can’t see. Coming from Shattuck-St. Mary’s, Harrington cites Levy’s ability to think the game as the biggest reason for her early success. For some, college hockey can be overwhelming at times. For Levy, the only thing she seems to be feeling is confidence.

“Coming from Shattuck, they have had a lot of success,” Harrington said. “They understand big games and they understand playing in pressure situations. I think that has helped her a lot. I laughed with her earlier this year because she probably saw more shots in the first two weeks than she saw all last year at Shattuck. What has been impressive for me has been how well she thinks the game and how she has learned the game as it has gone on. Certainly she has the physical skills but it’s her ability to think the game well. She’s got a smile on her face all of the time – she just loves playing hockey. That certainly has not only helped her in the position she plays, but it’s also helped our team. It has helped relax our team and I think we have been playing that way.”

“Definitely, Shattuck shaped me become the person I am today,” Levy said. “It was a very easy transition for me coming here. Coming from such a prestigious prep school and going to a college program, I was prepared in the weight room, school-wise and hockey-wise. I got over the homesickness issue at a young age and now just growing with my teammates and working with them every single day, Mankato feels like home for me now. I came into this season with a specific mindset and so did most of the other freshmen. We kind of made a pact when we got here. We want to turn this thing around. We want the Mavericks to be on top. The whole team has come together and everyone has pushed hard with those goals in mind and everyone has put it all on the line. We want to make this a program that other teams are afraid of.”

In this case, using the word afraid and respected are interchangeable. Minnesota State has begun to develop a reputation for being a hard-nosed squad that can make 60 minutes of hockey an unpleasant experience if you’re not prepared. Whereas last year the Mavericks had flashes of brilliance, this season MSU has shown the ability to bury their opponents on both ends of the ice. Harrington’s offensive attack is still a work in progress, but their dedication to defense never seems to waver – at least in terms of effort.

If you need added proof, just look at the Mavericks’ blocked shots this season. Minnesota State leads the conference in blocks, including an eye-popping 26 on Dec. 1, in Columbus. It has become a bleak proposition for opposing offenses. If a shot on the Maverick net gets through, 96 percent of the time Levy is there to stop it. Being good on defense takes a special kind of commitment that you can’t just talk about – actions speak much louder than words. The Mavericks are letting their play do the talking.

“Our team definitely plays strong in front of me,” Levy said. “Some games there are a lot more blocks than shots on net. They want this team to succeed and they want to see us move up in the conference and in the rankings. They will risk their body by stepping in front of a shot. I personally don’t look at the numbers – it’s all just a statistic in the book. I come to the rink every day and I enjoy working hard and I love to play the game. I just go out and play my best, whatever my best is that day. I am focused on being present with the team and embracing the team philosophy we have this season. I am definitely more interested in the team being a cohesive group and embracing that common feel of sisterhood and love for the game we are playing.”

“We are in a process of developing our offense a little bit and still kind of finding out who gives us the best opportunity to be successful, but they all understand we have to play defense,” Harrington said. “It’s a group effort when we play. Whether it’s a goaltender, defenseman or forward, it’s all five working together and being good as a group when we do that. I think our team has understood that, that they champion one another by making great plays defensively. They recognize and celebrate that, and I think that’s what has developed our team into a good defensive team.”

It’s not a mistake that when being questioned, Harrington, Levy and Hinze mentioned the word “team” with every response they gave. It’s also not a coincidence that the Mavericks have jumped out to their best start since 2005-06. It’s not surprising that when asked to sum up her team this season in four simple words, Levy’s response was straight to the point: “We are a family.”

Beginning in early January, MSU will take part in the Minnesota Cup along with the University of Minnesota, St. Cloud State and Minnesota Duluth.