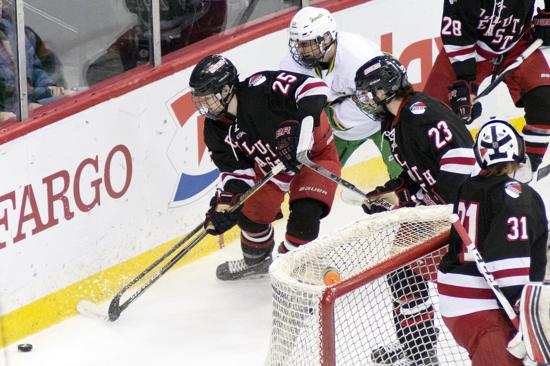 Luke LaMaster, a senior defenseman on the Duluth East High School boys’ hockey team has been named the winner of the 2018 Reed Larson Award. The award, presented to the top senior boys’ high school hockey defenseman in Minnesota, is based on the following criteria: academics, community/extracurricular activities, citizenship, coachability and, of course, on-ice performance.

A stalwart on the blue line, as well as an offensive force, LaMaster has four goals and 39 assists for 43 points in 28 games this season to rank as one of the state’s highest-scoring defensemen. The owner of 10 multi-point games, he helped the Greyhounds advance to their first state tournament appearance since 2015. Thanks in part to his defensive prowess, Duluth East finished the regular season ranked 11th in the state with only 1.92 goals allowed per game.

A two-year captain, LaMaster is also a finalist for the 2018 Mr. Hockey Award. He will play his college hockey at Wisconsin.

“Luke is the glue to the team,” Duluth East head coach Mike Randolph said. “He is extremely dependable and looked up to by all players on the team and youth players in the community. Luke is offensively gifted and defensively sound. He’s a smooth, shifty skater with great hands and hockey IQ. He has taken his role as a leader very seriously and the team followed.”

Off the ice, LaMaster owns a 3.8 GPA and helped lead a food drive this winter that collected over 260 pounds of food and raised more than $500 for a local food shelf. In addition, LaMaster has volunteered his time with the Boys & Girls Club of Duluth and the local youth hockey programs.

“Luke is a leader, role model and mentor to youth players in the community,” Randolph said. “He goes above and beyond what is expected daily to ensure that he and the team are representing the program, community and area in a positive way. Younger, future players look up to Luke and he presents himself in a way that most high school kids are not able to.”

The 2018 Reed Larson Award was presented at the Class AA State Tournament Banquet at the Roy Wilkins Auditorium on Wednesday night.