Thanks to several new experiences, Minnesota Wild forward Jason Zucker is making an impact on and off the ice 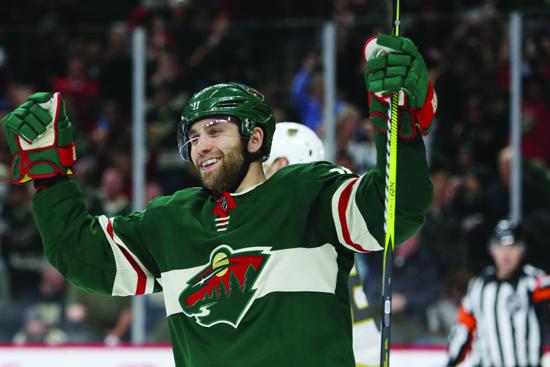 Jason Zucker is third on the Minnesota Wild in scoring with totals of 22-18--40 in 54 games this season.

On the ice, he is putting up career numbers. He is third on the team in scoring with 40 points and is just two goals behind Eric Staal for the team lead in goals with 22. Through 54 games this season, he’s poised to set personal bests in both categories.

“I think every summer I try to make sure that I am preparing better than the year I did before,” Zucker told me by phone. “Mentally, if I know that I did everything that I needed to prepare myself, then at that point you’re just playing hockey.”

That’s something that has become easier for him under head coach Bruce Boudreau. Zucker had his best season as a pro last year, in Boudreau’s first season with the club. It’s not that Zucker didn’t like former coach Mike Yeo. In fact, the two had a good relationship at the time of his firing in 2016. But with Boudreau, Zucker is a mainstay with the Wild. Boudreau has confidence in the way Zucker plays, and Zucker has the confidence that he can voice an opinion to his coach any time he needs to.

“I am able to talk candidly with him,” Zucker said. “If I disagree with something, I can go to Bruce and tell him and he’ll also say whether he agrees or disagrees with my disagreement. It’s nice to be able to talk to him, and I feel that he’s that way with a lot of guys.”

That freedom under Boudreau has changed Zucker’s path. Since Jan. 1, Zucker has had at least one point in 11 of 15 games. In November, he became the first player to score six straight goals for his team in 14 years, according to Elias Sports Bureau. He did all of this while celebrating his greatest achievement off the ice, the birth of his first son, Hendrix. It was something that created great balance in his life.

“It definitely gives you a different perspective,” Zucker said. “The great part of that too is that I already had that with (daughter) Sophia and (wife) Carly. It’s more amplified now with Hendrix. If you have a tough game and you’re ticked off after, you go home, you grab your son and you hold your son and everything else just goes away.”

His recent trip to the hospital for the birth of his son was far from his first to visit a child. More often it’s a visit to Children’s Minnesota to visit sick kids and their families. In fact, he’s such a mainstay there that he and Carly have now kicked off a fundraising campaign called Give 16. The charity has donated $160,000 towards a new broadcast studio and family suite at the University of Minnesota Masonic Children’s Hospital and they’re giving another $1,600 for every goal Jason scores this season. Considering the pace he’s on, it shouldn’t take them too long to get to the $500,000 they need to build the facility that they envision to give patients and families a place that they can enjoy watching a game or even make their own mock TV broadcast.

“Carly and I wanted to do something, we were just so passionate about that hospital,” Zucker said. “For us, when we had a connection (with Tucker Helstrom) and that hospital, we knew that we wanted to give back in some way,”

His friend, Tucker Helstrom, passed away two years ago at the age of 9 from osteosarcoma, but not before the two had created a strong friendship. It was on one of Zucker’s first visits to Children’s that he met Tucker and the two instantly became friends. Zucker was back often for visits and even got a tattoo, after Tucker passed away, of his favorite bit of advice: “Shoot More.” While there is no joy when a child loses a battle with cancer, there can sometimes be a silver lining. Zucker’s chance meeting has turned into a bit of good fortune for so many other children who find themselves in Tucker’s shoes and who will benefit from Jason and Carly’s incredible generosity.

“I don’t know if we’d be in the same place (without meeting Tucker),” Zucker said. “As far as the Give 16 campaign, building the family suite and broadcast studio, I don’t know if it would have happened this quickly. For us, doing the Team Tucker events that we did and giving that to the Kyle (Rudolph) Endzone, it just gave us another connection back to the hospital.”

Zucker is a restricted free agent this offseason, and after the season he has put together, he should be in line for a nice raise from the Wild. He’s certainly earned it on the ice, while the community has and will continue to benefit from it off the ice.