The worst kept secret in the NHL

Brock Boeser’s 20-goal, 40-point rookie season (so far) has thrust the Burnsville native into the spotlight 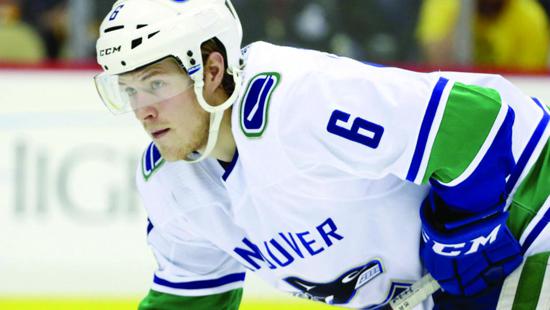 Vancouver forward Brock Boeser, a Burnsville, Minn., native, is second in the NHL in scoring among rookies with 41 points in 44 games.

“I think by the game I am starting to notice it more and more,” Boeser said by phone. “Now that you score that many goals and we’re not doing as well, there are a few guys that are taking some runs at me.”

With totals of 22-19--41 in 44 games, Boeser leads his team in scoring, is second among league rookies in points and is eighth overall in the NHL in goals. This month he’ll play in his first NHL All-Star Game, becoming the first Vancouver rookie to be named an All-Star in 47 years. So it’s understandable why opposing teams are giving him just a little more attention.

But being the best guy on the ice is something that Boeser is used to. He scored 46 points in 24 games during his junior (and final) season at Burnsville. In his one full season (2014-15) with Waterloo in the USHL, he led his team and the league with 35 goals, making the All-Rookie Team and the USHL All-Star Team. In his first college season at North Dakota in 2015-16, he led all of Division I hockey in goals (27) and points (60), and helped his team win a national title. That same season, he helped Team USA take bronze at the IIHF World Junior Championships. With all of that experience of being the best under his belt, he is also well adapted to the frustration that comes with it.

“I’ve learned from high school, I used to get so frustrated,” Boeser said. “USHL was a little bit like that. Then last year at North Dakota was a pretty frustrating season; I think I really learned a lot from last year. I didn’t have the greatest year after my freshman year and I think that really helped prepare me for that type of stuff now.”

Within moments of speaking with Boeser, you realize that he’s not your average 20-year-old. The Canucks drafted him 23rd overall in 2015 and his on-ice performance is just one of the reasons why. His ability to handle all that life throws at him is uncanny and also a big reason for his success.

One day after losing a double overtime game in the first round of the NCAA Tournament, Boeser chose to end his two-year career at North Dakota. He was then whisked away on a plane to Minnesota, his hometown, to play in his first NHL game for Vancouver. It was a situation that would have even the coolest of customers in a sweat.

“I was pretty exhausted, so I was just hoping I’d feel better by the game.” Boeser said. “I was obviously really excited, just thinking about it. It’s a short flight, but it felt long. But I was really excited.”

That excitement turned into fuel when Boeser scored his first NHL goal – one of four he’d score during the final nine games that Vancouver played to close out the 2016-17 season. After that, he refocused and realized that the offseason would be like none other he’d experienced. Working out every day and working more on the skills he felt he needed to improve on, Boeser said it was much more intense than any other offseason of his life. And the results have spoken for themselves. In addition to his impressive points total, he is a frontrunner to win the Calder Memorial Trophy as NHL Rookie of the Year. If he does it, he’d be the first Vancouver player to do so since Pavel Bure in 1992. That year, Bure finished with 60 points. Boeser already has 40 – before the All-Star break.

“It’s been pretty crazy. I just tried to set my expectations at 20 goals for the whole year,” Boeser said. “Obviously I got that before Christmas, so it’s pretty special. I like to set my expectations high. I didn’t really know how well the season was going to go. But it’s gone way better than I would have thought. But with our team, we’re not getting the result we wanted, which is bad. So that is kind of frustrating, too.”

Brock said that when he saw his father over Christmas, it was the best his father had looked in a few years. The two talk regularly, often on game days. Sometimes it’s about hockey and sometimes not. While his words are encouraging to Boeser, it’s the life his father has lived and persevered through that has been so inspiring.

“Just the stuff he has gone through, I think that has turned me into the person that I am,” Boeser said without hesitation. “He’s a great role model to look up to.”

A role model is exactly what Brock has become to legions of fans around the country and back home in Minnesota, and that’s saying something considering the Canucks are one of the hometown Wild’s archenemies. Still, he’s received plenty of support from those he knows and those he doesn’t. And his position as a role model is one he embraces.

“Yeah, I actually think about that a lot,” Boeser said. “Just looking at my little cousins like I used to be – watching my older cousins and my brother play. It’s obviously cool that they look up to me now. Not just them, but other kids from Burnsville and around the community of Minnesota. I truly realize how lucky I am and how much of an honor it is to play in the NHL.”

It’s just one of the many honors this sensational rookie is sure to garner during this season and beyond.