The Non-Call heard around the world 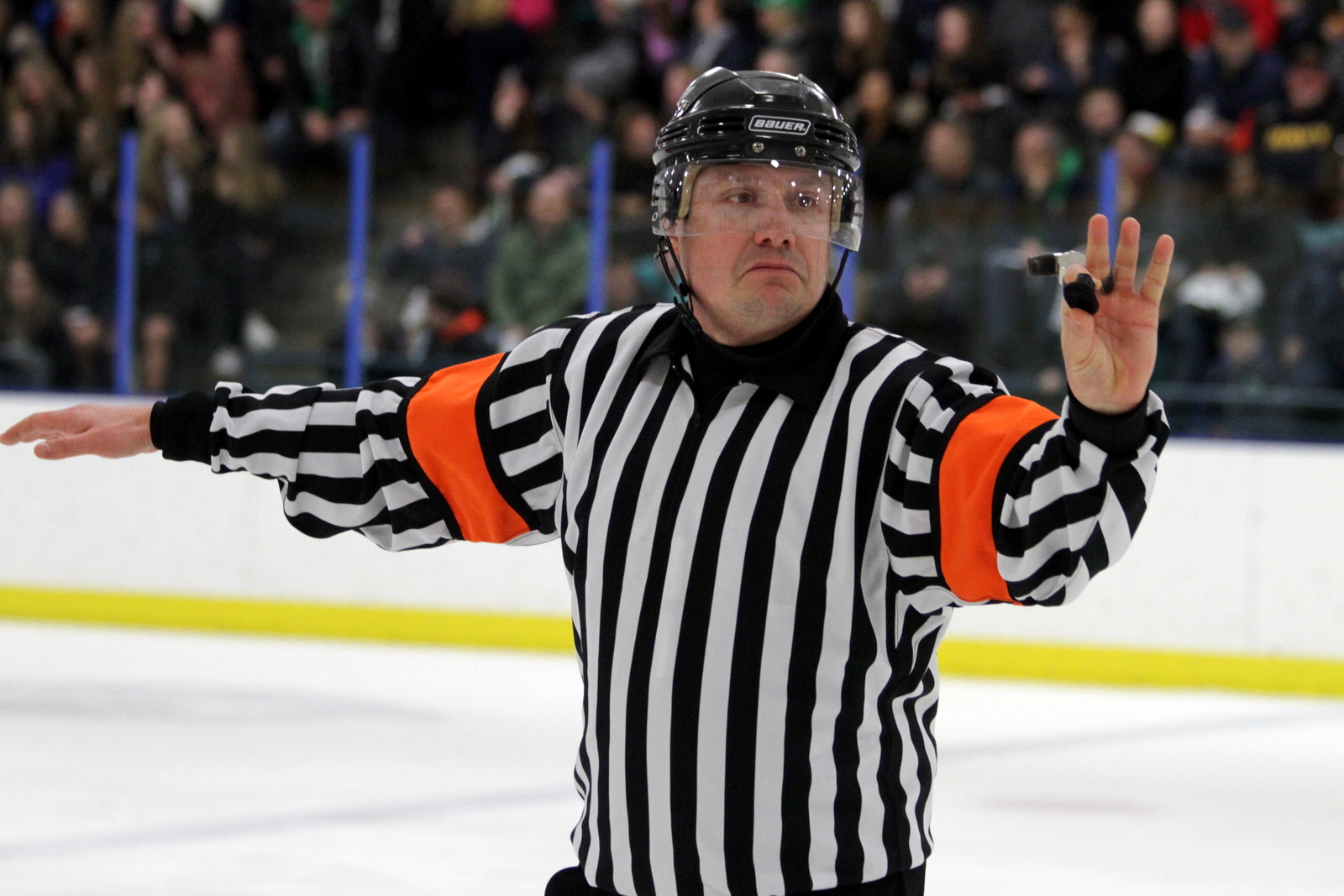 This official was not involved in the SCSU/Gopher game. Calls made and not made will always come under scrutiny.

They are calling it the worst non-call they have ever seen.

Personally, I wasn't watching the game live, so I didn't see the penalty seen around the world. Apparently everyone saw it except for the guy standing in the corner with a whistle. Obviously, he didn't see it. Which is the whole point of the matter.

Highlights all over social media showed that St. Cloud State defenseman Nick Perbix was pulled down from behind by U of M forward Blake McLaughlin. Seconds later, the Gophers scored the overtime winner for a 4-3 victory.

St. Cloud State fans were irate at what they deemed an obvious penalty. But the referee, who was right in front of the play and witnessed Perbix being taken to the ice, never raised his arm. He did make a pointing motion towards the ice, whatever that meant.

After Sammy Walker netted the game winner, SCSU fans took to tossing empty nacho and pop and whatever-else containers onto the ice while announcers said Gopher goalie Jack LaFontaine was allegedly mocking Huskie players in front of their bench. There's no winners when that happens. But, college hockey, eh?

The non-call, if you call it that (not calling a penalty is still a decision and therefore still a "call"), received plenty of attention on social media, and much like political posts, this one was just as two-sided with any Gopher or non-Huskie fan saying it was either a dive, or that it was payback for SCSU receiving some weak calls earlier that never should have allowed them to be in overtime in the first place.

Meanwhile, Huskie lovers were flabbergasted how the call was not made, and what implications this could have on seedings come March and rankings this week, and just the overall rivalry vibe. They shouted a chorus of "C'mon Man!"

Throwing stuff on the ice? Leave that to the Talahasse Warthogs fans, or anytime Carl Racki bounces one of your guys on the Hamilton Mustangs.

Because my referee experience is only in adult league and alumni games where only loose teeth and visible blood are worthy of a whistle, I referenced a good referee friend to discuss the play. As most high-level referees, this particular official was a very good hockey player who understands the game and has officiated top-level high school and college games.

"So it looks like he was diving because it was a weird way to fall. But when you slow it down you could see that he pulled his jersey so it would explain why he did fall like that. The referee couldn't see it from his position, but should have called something. Either on both or the U of M  player. "

I asked why would a defenseman trying to break out of the zone with nobody behind him and being that close to the net resort to a dive that has a low rate of being called?

"When I first saw it," my referee buddy said, "it looked weird, like hockey players don't fall like that so your first thought is he is trying to draw it. And you had the net by them so did that do something?"

As for the stick not being part of the pull down...

"As a ref you're watching his stick and his hands, but mostly the stick and the stick didn't hook him so my thought would be what the hell happened then?" he said.

He admitted the referee missed the call.

"They missed the call, but what if the guy did dive and you call a penalty on the U and St. Cloud scores and wins and the video show he maybe never touched him?"

The replay showed he indeed dragged him down by the jersey, but this wasn't the benefit the referee had in his viewing of the play.

"It's a tough spot as an official because you can't call what you don't see, and the Gopher player was really good on where he pulled," my resident referee said.

McLaughlin even slowed down to look at the ref as if to admit he was caught with his hand in the cookie jar, or in this case, his hand grasping the back of Perbix's jersey and yanking him to the ice. But the referee, at that point, couldn't raise his arm because the play had already passed, and you can't call a penalty on a player, coach, bench, or crowd reaction. As our resident referee stated, an official can only call what they see. Plus, McLaughlin's body language could have easily said, "Hey you gonna call that dive? No, okay I better keep playing then."

The NCHC issued a statement regarding the non-call and the subsequent events that transpired. The statement reads:

"The National Collegiate Hockey Conference has determined a minor penalty or penalties should have been issued on the sequence immediately leading up to the game-winning goal in overtime during the University of Minnesota – St. Cloud State contest on Saturday, Oct. 16. NCAA Ice Hockey Rules & Interpretations do not allow for judgment calls of minor penalties to be reviewed through the video replay criteria. Disciplinary action for any game officials will be handled internally by the conference office.

The NCHC also has a policy that outlines acceptable conduct and behavior for all parties taking part in a game. The actions by some fans within the Herb Brooks National Hockey Center at the conclusion of the contest were unacceptable under any circumstance and inconsistent with our mission, vision, and shared values. Endangering student-athletes, coaches, staff, officials, and other fans by projecting objects on the field of play will not be tolerated. The Conference will conduct a review of related policies with all member institutions to avoid these incidents in the future.

"Although it is not and will not become conference protocol to provide public comment on judgment calls made by game officials, this statement is being issued due to the significant impact on the game's outcome, along with the dangerous aftermath," NCHC Commissioner Josh Fenton said."

It appears what only matters to fans is which horse you had in the race, if you had one at all. For lovers of college hockey, or of hockey in general, some takeaways could be this:

And lastly, shake an official's hand next time you see one at the rink and truly thank them. Without those guys and gals in stripes, your son or daughter wouldn't be playing in a safe environment.  They perform a thankless duty in the hockey community. When they do well, they go on their way. When they don't do well, they are on the brunt end of a verbal communal slash.

We need more of them, not less of them. Let them know they are appreciated, even if they miss a call here or there.

Or, grab a whistle, throw on some stripes and lace 'em up.