With solid core returning, Gophers looking to jump back into national prominence 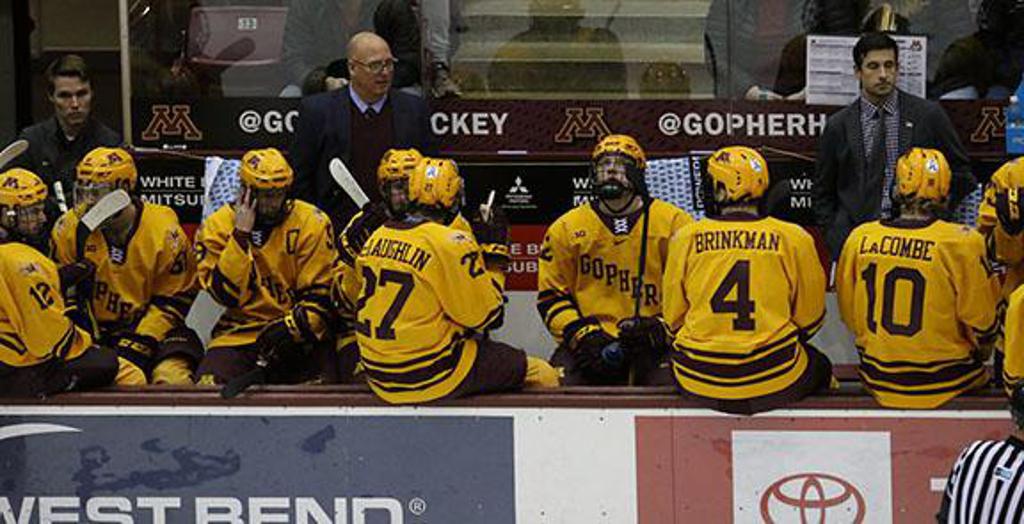 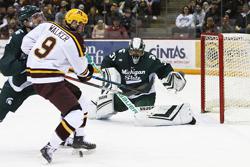 The Minnesota Golden Gophers will be celebrating their 100th season when the puck drops tonight against Penn State in their season opener. And they hope it is a memorable one, and not because of the Covid-19 Pandemic.

The Gophers have been absent from consistent success in recent years but this year has the potential to light the program back up behind third year head coach Bob Motzko. Minnesota is ranked No. 11 in the USA Today Poll and will look to shift around the top 10 throughout the season.

Motzko and the Gophers had last season cut short due to the COVID-19 pandemic which was frustrating for both the team and fans, seeing that the team was beginning to hit their stride. The team will try to find its groove and pick back up where it left on tonight as they host Penn State at 8:30 p.m.

“We’re all preparing, we’re all ready to go. We’re in a great spot. Let’s just get the season started. It’s going to be a rocky road but we’ll get through it once we get that first game,” Bob Motzko said.

The Gophers are returning most of their team including their core which is led by last season’s leading scorer, junior, Sammy Walker. They are also welcoming four new freshman in Carl Fish, Brock Faber, Mason Nevers and Mike Koster.

Koster, a defenseman, has exceeded the coaching staff’s expectations so far this offseason and will be counted on as a key contributor going forward.

“He’s really surprised us. He will be an elite offensive defensemen at this level which we were hoping but you love to see it when you get started,” Motzko said. “We have an entire group of guys that have to take that next step. Everyone knows Sammy Walker and [Blake] McLaughlin and [Sampo] Ranta and [Brannon] McManus. Those guys had good seasons last year but they have to take that next elite step. They need to go from 30 points to 40 points.”

It’s easier said than done but it is imperative the Gopher’s improve on both ends of ice if they want to rank near the top of the country. The Gophers outscored opponents last season by a slim margin of 100-98 and need to work on finding the back of the net more often which is something Motzko has put emphasis on this offseason. Their state counterpart, Mankato State, outscored opponent’s last season 153-56 and they finished the season ranked No. 2 in the nation.

The power play will have to get better. Last season they scored just 19 goals with a man advantage, a paltry 16.2 percent. By contrast, Harvard led the nation at 31.2 percent, almost twice the rate of the Gophers.

Minnesota also ranked 25th nationally in penalty kill at 82 percent. Minnesota State led the nation with a 91 percent kill rate. That is another area the Gophers will have to improve on.

Defensively the Gophers lose Tyler Nanne and Ryan Zuhlsdorf, but bring on the likes of Koster, Brock Faber and Carl Fish to join a steady defensive crew that includes returners Ryan Johnson, Jackson LaCombe, Robbie Stucker, Ben Brinkman and Matt Staudacher. Faber was the top Minnesotan chosen in this year’s NHL entry draft and Fish has been coined a steady defenseman with good size and defensive awareness. Koster (Chaska, MN)  and Fish (St. Paul Johnson, MN) played juniors last season (Koster in the USHL and Fish in the NAHL) and Faber (Maple Grove, MN) spent the year with the USNTDP Under-18 squad.

Last season the Gophers ranked 28th in the nation by allowing 2.65 goals per game.

One area Motzko does feel comfortable with is his goaltenders. Senior Jack Lafontaine will be the team’s starter but Motzko expects sophomore’s Jared Moe and Justen Close to make the job competitive.

“Our numbers are excellent. We’ve got three good goalies. This might be the best three goalies I’ve been around as a group of three,” Motzko said. “Lafontaine’s numbers from Christmas on last year were excellent. I mean high level.”

Motzko put the team through extensive skill development workouts with the prolonged start to the season but have been ramping things up recently with several scrimmages throughout the past week. The team has not been able to have any large team meetings on film but have been conducting film sessions with smaller personnel groups.

Playing this season with empty stands will be another aspect for the Gophers to adjust to this year but it is not something Motzko is worried about in their matchup with Penn State.

“Is it going to be different without no fans? Absolutely, but they are going to adapt quickly to it,” Motzko said. “We had a strong second half last year and we’re knocking on the door. We have got a good hockey team returning but we still have another big step to take. If we get off to a start like we finished last year, we’ll be in a good spot.