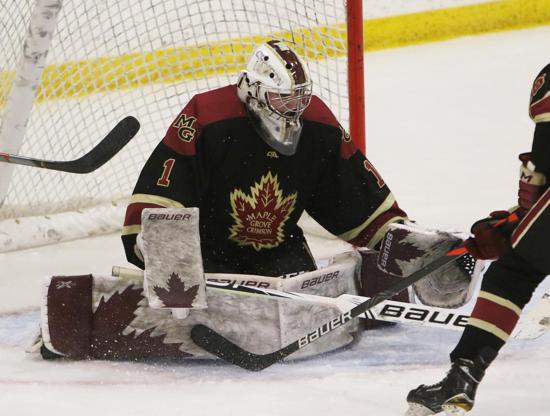 Prior to sharing these tips, I think it is important for me to share my philosophy on goaltending. I view the goalie as the foundation of the team. As a coach, I expect consistency from my goalies. I do not expect them to win games by themselves, and I do not want them to lose games that my team plays well enough to win. Teams have confidence in consistent goalies, and that confidence is reflected in the team’s play. To be consistent, I feel there are four things a goalie needs to do:

1. Stay on his/her feet as much as possible.

The most consistent goalies are able to move quickly around the net to get their body in position to stop the puck. Skating and moving around the net area are the most important skills for a goalie to master.

1. A minimum of 10 minutes per practice should be allocated for goalies to work on individual skills. Goalie specific skating, basic saves, and working on angles are all skills that need repetition to improve.

2. Goalie-specific skating must be a part of every practice. Movement around the goal crease area is the most important skill on which to work.

4. Try to have one drill each practice where the goalie has to stay on his/her feet. This encourages proper movement, positioning and angles. Make sure you choose a drill in which your goalie can be successful staying up.

5. Spend time by the net with your goalies during practice. Positive remarks and constructive instruction show the goalie that the coach is interested. Your goalies will practice with more intensity if they know the coach is evaluating them.

1. Communicate your expectations for your goalies. I believe consistency is the most you can ask for.

2. Communicate your plan for the goalies. Who will start? Will the starter play half the game or the whole game? Goalies who know their roles are able to prepare and focus better on the game.

3. A game warm up is important for goalies. Instill in your skaters the importance of shooting to warm up the goalie. Shots should be low, on the net and they should be from far out to begin. At least one passing drill where the goalie needs to move to maintain positioning is also important.

4. Be positive with your goalie during a game. A negative comment may affect your goaltender’s ability to concentrate 100 percent on the game.

5. Try to avoid placing undue pressure on your goalie. Pulling a goaltender from the game to fire up the rest of your team is never okay. I feel a youth goalie should only be removed from the game if the coach believes that keeping the goalie in the game will cause more harm to the confidence of the young goalie.

6. Talk with your goalies after the game. Evaluate their game. It is important to goalies that their contributions are not overlooked.

Coaches, remember that goalies deserve as much coaching as any other player on your team. I hope you can use these tips to develop your goaltenders.