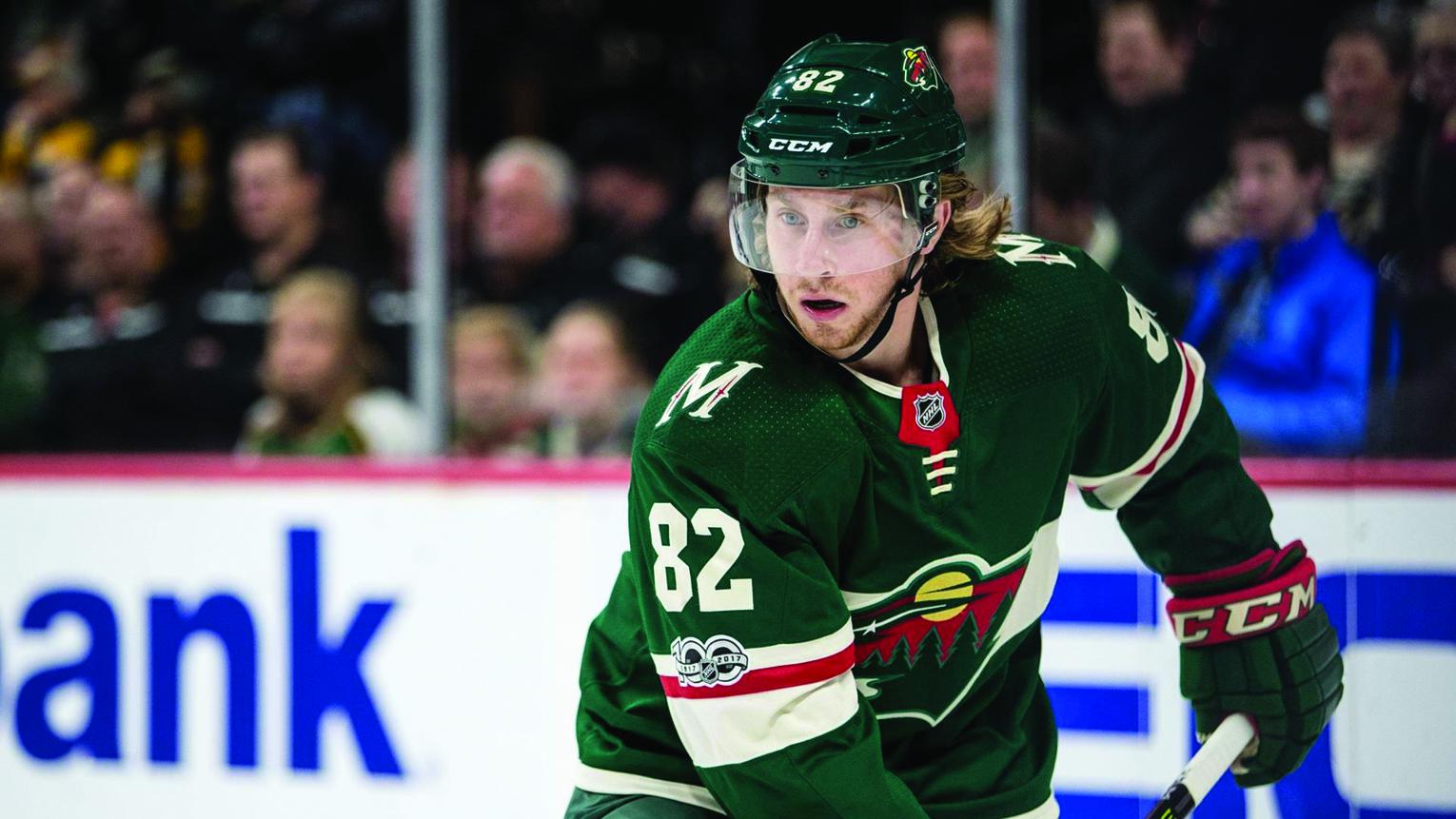 It’s a story Justin Kloos will one day be able to share – and most likely will share- with anyone and everyone who will listen, but if you want to hear it right now you’ll have to give him some space so everything can sink in a little bit first. He also needs to catch his breath. And sleep. And relax. And sleep some more.

Much like a goalie taking shots in an all-star skills competition, since Jan. 16, the former Gopher, Iowa Wild and Minnesota Wild forward has been trying to slow down time. It’s not that he hasn’t embraced the change, but given the hectic pace he’s been on since finding out he was traded to the Anaheim Ducks organization for Ducks forward Pontus Aberg, the Lakeville, Minn., product has been trying to hold onto the dominoes as they continue to fall, taking him through his first experience as a professional involving an in-season trade and the ups and downs that go along with it.

“It’s been crazy,” Kloos said. “I have never been through something like this before, so it was shocking at the start. You just try to stay positive and think about it as a good opportunity in a new place where someone wants you.”

The circumstances surrounding the move were crazy, that’s for sure. On Jan. 15, Kloos was the leading scorer for the AHL’s Iowa Wild with 30 points in 34 games played. Of those 30 points, 12 were goals, which tied him for first on the team in goals.  As a matter of fact, just the night before, Kloos registered an assist in the Wild’s 3-2 overtime win over the San Diego Gulls. Then on Jan. 16, news came trickling down that he had been traded to the Ducks. His first assignment: drive to St. Paul from Des Moines and link up with his new squad, who ironically enough, were playing the Minnesota Wild at the Xcel Energy Center on Jan. 17. Another discussed destination for the sniper was the Ducks’ AHL affiliate, the San Diego Gulls, the same team Kloos had just played three days prior.

“I drove straight to St. Paul to meet the team,” Kloos said. “It was just a super bizarre situation. The biggest thing is I have probably met 80 new people in the first three or four days after I got traded, so it was kind of keeping track of everything. You really don’t have time to sit down and think about the trade at all or what it means in your life. Then all of a sudden all your stuff is back in Des Moines and you are living in California.

“Change is always a little different, but you get excited about new opportunity and new people to impress. You never know, if you play really well the first couple of weeks and make an impression, that can really help you make big strides with your coach and your teammates, and that can last for a long time. It’s not that I didn’t feel good about the impressions I made or what I did when I was in Iowa. It’s just a new opportunity. When you sit back at the end of the day, your career is only so long and you want to avoid getting stuck in your ways and being in one spot. It’s scary but also exciting to go into a new opportunity because you never know if this is time you can get your foot into the door and if a big break will come.”

In the end, despite the reservations that go along with a trade and the disappointment that goes along with leaving his hometown team, the move has given Kloos an extra spring in his step. Knowing that his resume had reached a point where the Ducks were comfortable dealing an NHL forward to the Wild for his services, the speedster hopes his play will be just as strong in sunny California as it was in the cozy, and familiar, rinks of the Midwest.

So far, so good. After playing one game with the Ducks, in his first game with the Gulls, he registered an assist. Speaking from his hotel room in San Diego, Kloos hopes that someday soon he will be able to catch his breath and simply concentrate on hockey. Noticeably (and understandably) exhausted, he can’t wait for the rollercoaster ride to end. He can’t wait for the questions to fade away and the conversations to subside. He is once again ready for his play to do the talking for him.

“That’s when I feel most comfortable, when I’m on the ice and at the rink,” Kloos said. “New dressing rooms, new people, new teammates, new linemates, new systems, new power plays, new penalty kills. All of that stuff is a little overwhelming. When I finally hit the ice, it feels more normal and that’s what I have been trying to focus on.

“I played two games right away with two different teams. I really haven’t practiced on the ice that much. You have a noon game with the big club and then a noon game down in San Diego, so I didn’t have a pre-game skate. So it’s been a super weird schedule ever since I got traded, and hopefully in the next couple of weeks I will get more into a rhythm and just get used to playing hockey. I’m looking forward to getting to a point where all I have to do is worry about hockey when I get to the rink and not worry about the other stuff.

“Honestly, the whole thing has been pretty overwhelming. The amount of support I have gotten has been unreal and I really appreciate that – from some of my friends and family, former coaches, teammates. They have all reached out and it’s been reassuring because everyone I have communicated with has talked about how this is an important time in my life and how this is an opportunity for me.”