There are two numbers the Bemidji Youth Hockey Association (BYHA) pays attention to more than any other. One is constant and never changing. The second number fluctuates yearly and if they are on the point, the BYHA hopes that second number keeps going up. One number reminds them why it’s important to keep building. The second number is often times the answer as to whether or not they are skating forward or standing still.

No. 1: 222. Two hundred twenty-two is the distance in miles (roughly) between Bemidji and the Twin Cities’ metro area. Why is that important? In today’s game – no matter what level of hockey you are discussing – the amount of opportunity offered for players within an association is essential to their potential growth as their career skates forward. In Bemidji, the current BYA board recognizes that in order to move forward, they need to build an environment that promotes enthusiasm and family, but also development and advancement. Depending on their skill level and expectations, players differ from team to team and from rink to rink. The Bemidji Youth Hockey Association has made it their mission to give players and their parents all of the tools they need to make their experience the best it can be. While in the past youth players, coaches and parents in the area may have felt that a trip to the metro was needed to grow the game, not anymore.

“You have to be aware what your demographics are,” said Corey Rupp, former BYHA president and current member of the association’s development committee. “We are challenged in Bemidji because we are a large program in the middle of northern Minnesota. All of the towns around us are smaller programs, so you have to travel an hour and a half or two and a half hours to get like-sized programs. So it’s challenging.

“One of the things for us at the youth level, we play at the AA level and there are not as many teams there, so it’s easier to compare yourself to some of the metro programs or a Duluth program. It’s easier to find yourself saying let’s do what they do, let’s compare our fees to what their fees are or do things they are doing. That doesn’t work and I think we have done that in the past. You can’t be successful thinking that way because every area is a little different and you need to find your niche.

“Our niche has been trying to keep costs really low. We really promote the ADM (American Development Model) program with USA Hockey, trying to limit our travel at the younger ages and utilize our ice with the right station-based practices, small area games where we can get 50-60 Mites on the ice and still get that skill development but also be really efficient with our ice and costs as well. It’s tough. It’s a different challenge, but you have to know who you are and work to your strengths and not try to be another program that is different than you are.

“Even outside of hockey, there are opportunities all over. We try to develop opportunities with puck-shooting programs. The school has a great summer activity program for the younger kids and we have a bunch of summer skating programs and different dryland programs. It’s easy to get that mindset where you are traveling three or four hours to the metro area to try and get involved in a training program. We see people who do that and we see people get burnt out and exhausted physically and financially with all of that extra pressure being put on them. It’s not easy, but I think we try to create a lot of opportunities right here in Bemidji where you don’t feel you need to run to different areas to develop your game. We have everything right here.”

This leads us directly to the second number: 325 – as in 325 players (approximately) currently skating for the association from Termites through the 12U level.  That is a number that continues to rise and is proof that Rupp and company are on the right track. Current BYHA president Bruce Hasbargen sees it. Thanks to a successful fundraising campaign and a strong community backing, the BYHA hasn’t changed the participation fees associated with PeeWee or Bantam levels for nearly a decade. With affordable fees as a starting point, the association has also partnered with key supporters who have picked up a stick and skates right along them. In Bemidji, like in most areas, hockey and community go hand-in-hand, but in Lumberjack country, their relationship goes to another level. In Bemidji, they take a universal approach towards growing the game –or should we say university. Leading the way has been a familiar group of advocates who know the joy the game of hockey can bring – and also the opportunity.

They call it the Little Lady Lumberjacks. It’s a program that began several years ago geared towards attracting young girls to the rink. Who is “they”?  Spearheaded by former Bemidji High School head girls’ hockey coach Jackie Robertson, the idea incorporates the Bemidji State women’s hockey team in the association’s approach to build more numbers at the youth level. After teaming up with Bemidji State assistant coach Amber Fryklund, the Little Lady Lumberjacks were born.

The program gives skaters and families interested in playing hockey the opportunity to skate and interact with members of the local college hockey team. Players also have the opportunity to attend games and have a backstage pass to the lights and sounds of WCHA hockey – both on the ice and in the locker room.

And that program is just the beginning. To date, the partnership between the BYHA and Bemidji State has continued to grow, and with that, so have the association’s numbers. Just this past fall, members of the BYHA girls’ 10U hockey teams attended the Bemidji State-Minnesota State women’s hockey game and youth players were given the opportunity to interact with the Beavers and greet them as they took the ice. The game lasted about two hours, but the memories that each and everyone of the players walked away with will last a lifetime.

“Having a university is a great thing,” said Rupp, who is also the girls’ coordinator for the BYHA. “You have a lot of players around in the summer and players who are willing to help and run different programs from time to time. That helps. Players who kids are looking up to and watching all season long, dreaming about being a college hockey player one day and all of a sudden during the season and offseason they are right here around our kids and families. That’s pretty cool. You try to capitalize on that which is something not too many programs have.

“We have grown our girls’ program to the point where, for example at the 10U level, we have never had two teams and this year for the first year we have two teams at that level. We have 25 girls in that program and we haven’t had that maybe ever.”

“Our girls’ program was lacking for a few years,” Hasbargen said. “We didn’t have a lot of girls come out and now that side is growing also. The Little Lady Lumberjacks’ program is an opportunity for the girls from Bemidji State to come out and skate with our younger girls. Some of the young kids who participate in the program, they aren’t necessarily signed up to play hockey all of the time, but it’s an opportunity for them to come out and skate and play games to start that spark or interest in hockey. They do that once a week and that has helped grow our numbers. We are now starting to do things like that on the boys’ side, and that has also brought added interest to the game and the association.”

“Being in a small town like Bemidji, with the university having a Division I women’s hockey team – especially in northern Minnesota – I think it’s a great opportunity for us to be female role models for those young youth hockey players in our community and in the surrounding communities,” said Fryklund, who has also spent time on the BYHA development committee. “Taking that approach and having that in our background, understanding the bigger picture and what our purpose is, and that is to play the game and be role models and have an impact any way we possibly can.”

Another push taking place right now in Bemidji – which will no doubt add fuel to the flame of interest in youth hockey in the area – is the construction of a fourth sheet of ice. Already with three sheets to play on (Bemidji Community Arena, Nymore Arena and the Nielson-Riese rink), a second rink at the Bemidji Community Arena is being added with an anticipated completion date just in time for the 2019-20 season. The BCA (Bemidji Community Arena) is owned by the BYHA while Nymore Arena is owned by the Bemidji School District. The Nielson-Riese rink is city-owned. That means that the BYHA has worked, and continues to work, overtime trying to give their kids plenty of opportunity to skate. The effort has been backed by a community full of pucksters dedicated towards turning Bemidji into a hockey hotbed. As the popular saying goes, “if you build it, they will come”. The BYHA is building it and the players are coming.

“The Bemidji Community Arena was built by youth hockey for youth hockey,” Hasbargen said. “It’s a $2 million facility and we are adding a second sheet to it. The program is growing and we need more ice time. We just don’t have an entity in the city that is stepping up to build a new arena for us, so we took it upon ourselves. We got a ton of community support with sponsors, but it’s not easy. It’s an estimated $5 million second sheet of ice. It’s something we feel needs to be done to support the association and support the kids.

“We want to continue to grow the program. We have a lot of options in town here. We are a fair-sized community and there are a lot of options for kids. We are competing with other sports and other extracurricular activities, so we need to continue growing and generate that interest. We’ve had some growth and hopefully that continues. For us, it’s all about building that environment where kids come to the rink, learn those core values we are trying to teach, compete the right way and most of all, have fun.”

A new sheet of ice … opportunities for all levels and all ages … playing with and learning from college hockey players? 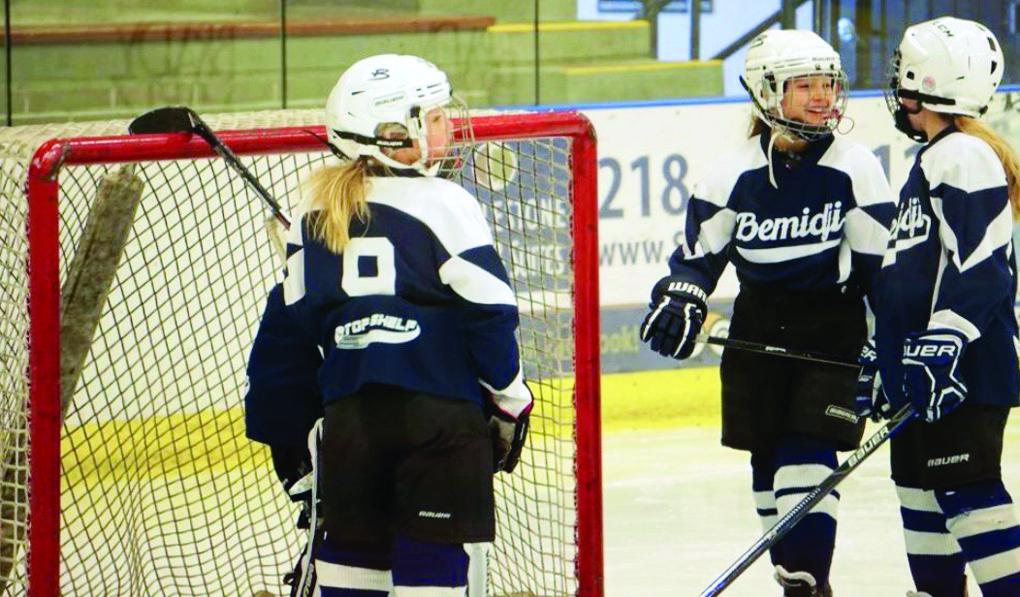 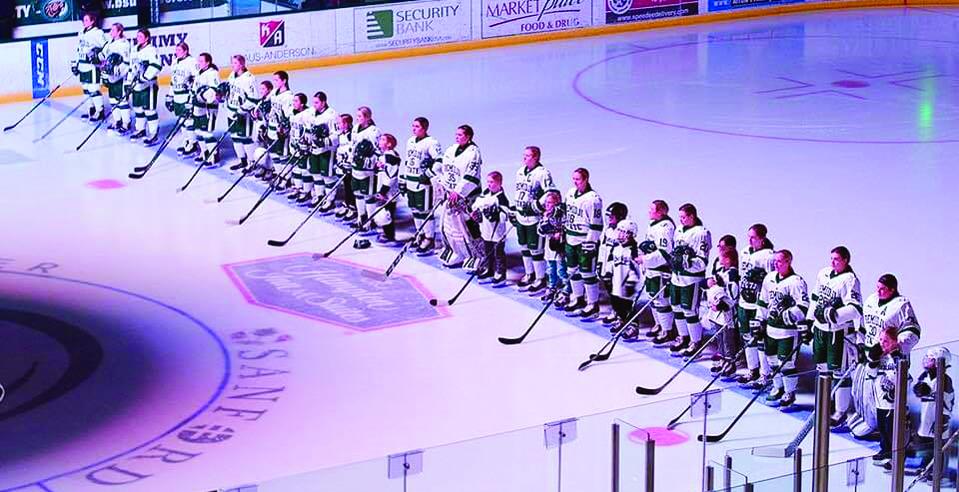