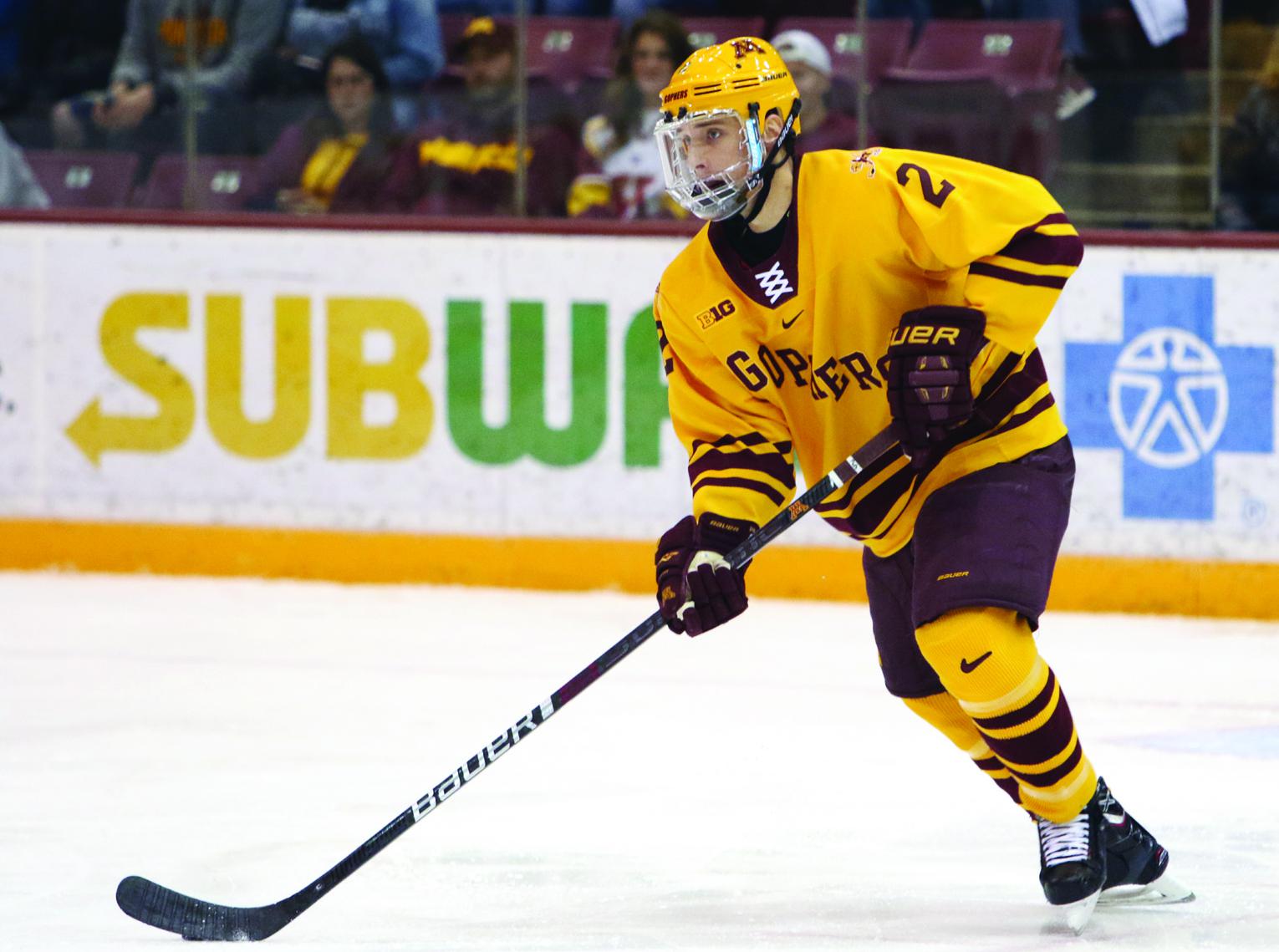 Over the years, I have always had a defensemen-specific column each season – sometimes several. One of the best for coaches, I think, was in 2011 when I wrote for the defensemen coaches specifically.

Here is that column, with a few changes and updates. I would suggest that defensemen coaches review this material each season – and make certain that all of their D’s have the proper mindset, skills and desire to be in the toughest positions in hockey.

There is nothing wrong with moving defensemen to forward and vice-versa, even at the high school level. NHL All-Star defenseman Jake Gardiner of the Toronto Maple Leafs, for example, was a forward at Minnetonka High School until my son, John (the Minnetonka D coach at that time), decided he would be an excellent D and moved him. He was obviously correct.

Most defensemen coaches are assistants at almost all levels. While they may also be in charge of the penalty kill and/or some other aspect of the team strategy, their primary duties are working with and directing defensemen, including during games.

Consequently, there are several pretty specific and a few more general things that they must do to optimize the defense group.

The first thing is to make certain they understand the position very well. It certainly is a very big advantage to have played defense. It is more difficult to understand the “defense first” mentality without having spent some time at the position.

• Not attacking beyond the offensive top of circle unless part of an imminent scoring opportunity. Going in deeper is almost always a bad idea and creates defensive liability. The D coach needs to monitor this closely. Safely going to the top of circle on a rush is good many times, however.

• Covering for the D partner. I think that not backing up a D partner is more serious than the error that created the need to back up the D partner.

• Shooting properly to create a goal, not necessarily to score a goal. Low shots that can be tipped and rebounded, and that end up in front of the net (not careening off the rear glass) are proper shots.

• Tough coverage in the defensive zone, especially the corners, front of the net and along the boards.

• Working with and having pride in the goaltender and goals against. Working closely with the goaltender is a critical function that has to be stressed and arranged by the D coach.

• Moving the puck out of the defensive zone as a top priority. It should be what the coach stresses the most after D-zone coverage. Moving the puck could be skating, passing or dumping (if necessary).

• Understanding that anything that happens in the offensive zone is a “bonus.” D’s earn their keep in the defensive and neutral zones.

Teams that play great defense are dependent upon all of the positions playing properly, including the forwards. However, the goaltenders (the ultimate defenders) and the defensemen still have to “carry the load.”

Defensemen coaches have to make certain that the current D’s are properly suited to play the position. That means the skill set (or potential skill set for younger players), the mentality, the physical ability and the intelligence. There was a time (it still lingers in some places) when the biggest kids became defensemen – and the goaltenders were the kids who couldn’t skate very well. Now we know that the most demanding skill-set position is defense. Coaches have to be objective about whether their D’s have the skill set.

They also need to know that the D’s can be satisfied defending – and not be up the ice too much or taking too many chances. Defense is a lot like being a lineman in football – not so much glory, a lot more guts!

It’s also important that D’s have some physical ability. In other words, 5-7, 135-pound high school seniors have no chance of moving on unless they plan on substantially more growth – soon. At the next level (junior or college), the average players will be 6-0 and 190 pounds. Coaches should be realistic as to whether their D’s can physically handle their jobs.

The intelligence item is also critical. Defensemen need to make very good decisions in critical situations – in their own zone and the neutral zone. Experience gets them the intelligence – game after game TEACHES.

The next big area for a D coach is being able to teach the skill set – as well as the little things that D’s need as they progress up through the various levels. Part of this teaching aspect is being able to create proper drills and small area drills/scrimmages that will allow players to practice the various skill sets.

There are really two parts to this. One involves the basic physical skills (skating, shooting, passing, etc.) and the other involves handling situations (2-on-1, quick passing to clear the zone, how to properly cover in front of the net, how to play the puck in the corner under various conditions, etc.). The physical skills have to be done on a constant and progressive basis season-long. Defensemen need to be willing to grind it out every day improving their basic backward skating skills, turning skills, passing skills and all of the other little things that must improve gradually.

Coaches also need to have time to teach proper situational skills that are best learned with repetitive experience, i.e. competitive drills. An example would be how to handle 2-on-1’s by every practice doing “short” 2-on-1’s from the red line in – or corner skills by having live corner “competition” drills. All the while the coach needs to be able to show proper positions or activities (how to control a player in front of the net, how to “chuck” a player in the corner to gain an advantage when exiting the corner).

I recommend that young youth coaches, even if they played defense in high school but no further, ask an experienced high school D coach to help in a few practices and to give them advice about drills and advanced skills. Even high school D coaches can use advice from coaches at the junior or college level. Having a cup of coffee and asking dozens of questions can be very helpful.

Of course, attending practices to see what drills are being used at the high school and/or college levels is also a great idea. I also still like to watch coaches during games and practices to see what they do under various circumstances – how they deal with players after good or bad situations, and how they teach and drill. Over-coaching D’s in games can take away confidence and not be helpful. I can’t stress that enough. Defensemen will make mistakes and will get beat – so confidence building is important. Practices are the place to do major teaching.

Game coaching, of course, is also critical. The D’s need to know pretty much what is going to happen with pairs – and what happens when there are D penalties. I feel that the D’s should be taught to be part of the power plays – and generally opposed to playing forwards at the point on power plays. There are two reasons. First, forwards are a large liability defensively when they have to defend. Second, it is bad for morale of the D group. Sometimes, a top umbrella will best be run by a really nifty forward, but that is about it for me. If there are two very good puck-handling Ds in a three-pair group, it’s time to look for a forward to convert to a D. Coaches should not be afraid, by the way, to look for that skilled forward who is just on the fringe of being a 1-2, that might really blossom as a defenseman.

The D group has to have pride about their position and about their group. It is up to the D coach to create that pride. A 2-1 win should be a bigger celebration than a 6-5 win, even if D’s get 1-2 goals. They need to know that the D coach is looking out for them. They need to feel like they are learning and progressing in practice, getting good game experience and getting good advice about how they are playing. They for certain need to know what the basic duties of a defenseman are, i.e. what they will be judged on. I strongly suggest using the “Golden Rules for Defensemen” column.

John Russo, Ph.D., is founder and now mentor to the Upper Midwest High School Elite League. He was a captain at the University of Wisconsin and recipient of prestigious hockey awards at the state (Peterson award) and national levels (Snooks Kelly). His Coaches Corner columns have appeared in Let’s Play Hockey each year since 1986.Order John Russo’s new chapterized book, “The Best of 26 Years of John Russo’s Coaches Corner.” It has been described as a “must read” for all youth coaches. Go to Russocoachescorner.com for information and ordering.