Any time you have the puck, you should be trying to score. 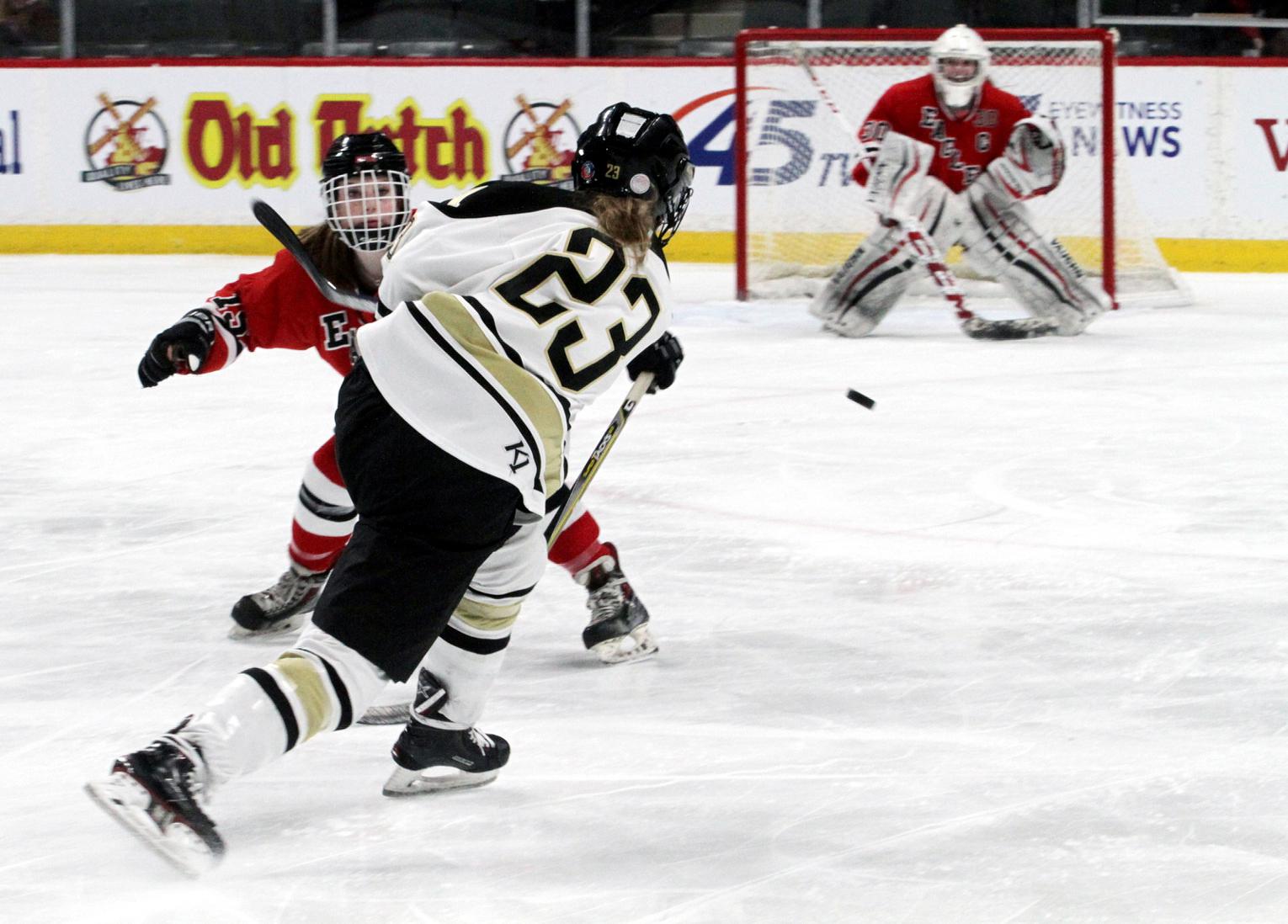 Most girls’ hockey games are decided by one goal. There seems to be a whole lot of scoreless or 1-1 ties in the female game along with many 1-0 or 2-1 decisions. You do see the occasional 3-1 or 3-2 game, but final scores like 5-2 or 4-3 are exceedingly rare.

Every team out there would love to score at least one more goal per game. So here are some ideas I’ve put together to help you make that happen as we head down the playoff stretch.

1. Take green shots
Teaching and using the concept of green vs. red shots has revolutionized the way that I teach attacking and scoring to my players. There is a great video online made by former NHL goalie Steve Valiquette explaining the difference between a red and green shot and which ones contribute the most to goal scoring. You can check out the whole video here.

At the basic level, he describes a green shot as one where the goalie has less than half of a second to set for the shot. These types of shots include tips, redirects, screens, one-timers, shots taken after the puck carrier cuts east-west (forcing the goalie to move and therefore not to be set when the shot is taken), or shots off quick passes that force the goalie to move (these can be made east-west or north-south – especially from below the goal-line to the front of the net).  These shots typically only account for 25 percent of the shots taken in the NHL, but they account for 75 percent of the goals scored. So increase the percentage of green shots you take and you’ll score more goals. Trust me, this one works.

3. Always be ready to shoot from tops of circles down
Players need to be taught how to be in a good shooting position any time they are below the tops of the circles in the attack zone. They need to have two hands on the stick, stick on the ice, stick blade opened up to the passer (preferably on the forehand) as a target and stick pulled back so that they can move into the puck as it comes and take a quick snapshot. This one-time snapshot with the stick on the ice is a true goal scorer’s shot.

Most important of all, the player’s body must be positioned so that they can release a shot immediately. The most critical pieces of proper body positioning are to have your feet pointing at the net and to have your chest opened up to the passer. So many goals are left off the table because players simply aren’t ready to shoot when the puck comes to them. In every drill you work on in the offensive zone, prioritize the importance of players being in this shooting position whenever they are in from the tops of the circles down.

4. Shoot fewer boomers
Every season, we got through a period where I don’t let my defensemen take any slap shots. This is usually because they are having trouble getting shots through quickly. And while they usually complain about having to take wrist shots and snap shots for the time being, they also typically get more assists and goals during this time because they are getting more shots on the net more quickly. Winding up for a big slap shot takes time and it requires space. If you’ve got both of those, and a pretty accurate shot that rarely gets blocked and mostly hits the net, then by all means wind up. But the vast majority of the time, players would be better off simply getting a low, hard shot through quickly instead. These shots generate rebounds and have a way of finding the back of the net all on their own.

Forwards should rarely be taking big slap shots. Make sure they practice taking snapshots or half slap shots (where the wind-up goes no higher than their waist) so that they can get shots off more quickly when in the scoring area. I always tell my forwards that the only time I really want them taking a full slap shot is when they are trying to clear the puck 200 feet on the penalty kill or when they are dumping the puck in on the offensive attack. The rest of the time, it should be wrist shots, snapshots and backhands.

5. Stress that any time we have the puck, we’re trying to score
I know that this makes sense intuitively, but let me explain. Too many players, coaches and teams wait to focus on scoring once the puck gets into the offensive zone. Our entire playing scheme feeds off the mindset that we are trying to score as soon as we get full possession on the breakout.

Think of watching a video of your team picking up the puck in your own end and scoring 10 seconds later. What does that entire video look like? What is every player doing? How are they moving? Where are they moving? Watch every detail and then write out how it happened. Now you need to teach your team how to do that. You’ll do it piece by piece, of course. And you’ll have many different “videos” in your head that you’ll have to break down and teach. And, yes, I know that very few of those videos will play out exactly as you scripted them and taught them. But players need to know what their options are for getting the puck down the ice quickly and with support and how to generate offense as a team, instead of solely relying on the individual skill of a few players to put the puck in the net.

Hopefully these five ideas give you a great starting point and lead to at least one more goal per game in the coming weeks.

To learn more about how to use what you do off the ice to take your game to the next level on the ice, visit www.totalfemalehockey.com. Kim McCullough, MSc, YCS, is an expert in the development of aspiring female hockey players. She is a former NCAA Division I captain and played in the National Women’s Hockey League for six years. She is currently the Director and Founder of Total Female Hockey as well as the head coach of the Toronto-Leaside Junior Wildcats in the Provincial Women’s Hockey League.