From tiny Taconite to mighty Minneapolis, Minnesota is full of hockey towns. But what city should be named the capital of Minnesota hockey? 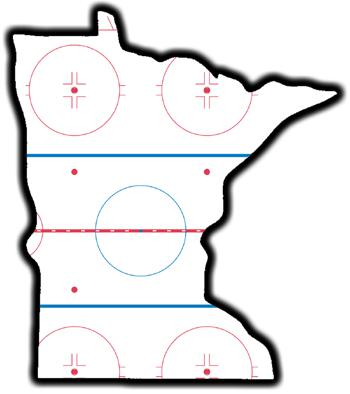 In the Dec. 10, 2007, edition of Sports Illustrated, Michael Farber dethroned the Motor City and handed over the mythical title to St. Paul. Detroit lost its designation as Hockeytown USA largely due to lackluster attendance at Red Wings games and waning interest in hockey in Michigan’s largest city.

St. Paul, Farber wrote, is hockey’s epicenter in the U.S., mainly because of the Minnesota Wild, a franchise that has gone out of its way to be respectful of the game, its fans and the countless hockey players in the state.

Farber’s conclusion was certainly greeted with pride here in the Twin Cities as it seemed the nation had been told what we have known all along: The game of hockey holds a special place in the hearts of countless Minnesotans – something you just don’t see in many other areas of the country.

What Farber failed to recognize, however, was the inadequacy of naming just one Minnesota city as Hockeytown USA. Although it’s truly just a marketing slogan the Wild cooked up in their nod to grassroots hockey, the “State of Hockey” really does capture what the sport means to this state.

Here in Minnesota (not just in St. Paul), hockey is strongly woven into our fabric of life. Learning to skate, shoot and stickhandle is a rite of passage for countless Minnesota kids every winter in cities and towns across the state. Hockey in Minnesota is about trudging through the snow to reach the warming house at the local park. It’s about skipping school or work to go to or watch the state high school tournament. It’s about hockey moms (and dads). It’s about rivalries. It’s about Mites, Squirts, PeeWees, Bantams and a nation-leading population of girls’ hockey players.

The debate will continue on as to what city deserves the title of “Hockeytown USA.” Detroit will point to its trademarking of the phrase. Warroad will look to its history of claiming the title for over 50 years. St. Paul will turn to Sports Illustrated. And a host of other cities, including Boston, Buffalo, Chicago, Philadelphia and Binghamton, N.Y., will make their case.

That debate won’t be settled anytime soon. But what is certain is that Minnesota is a state of Hockeytowns. From tiny Taconite (pop. 633) to mighty Minneapolis (422,331) and every city, suburb, burg, hamlet, municipality and whistle-stop in between, Minnesota is chock full of hockey-mad locales.

Instead of settling the Hockeytown USA debate, let’s shift gears and formally crown a capital of hockey in Minnesota. To do that, we used strict criteria to measure just how strong a case each city has in being named the hockey capital. That criteria included tracking the hometowns of players in pro, college (Division I and III) and junior hockey (U.S. Tier I & II, Canada Major Junior & A) in the 2017-18 season, the hometowns of all-time NHL alumni, a city’s historical success in winning youth and high school state championships, and the number of indoor ice rinks in each city.

The total number of players, state titles and rinks were then added up to determine our rankings for the capital of Minnesota hockey. For example, Roseau can claim three players in pro hockey, nine in college and one in juniors, while also owning seven NHL alumni, 12 state championships and three indoor ice sheets. Add it all up, and the home of the Rams clocks in with 35 points, good for 18th on our list.

This ranking system was put together in the hopes of measuring a city’s current success in pro, college and junior hockey, while also taking a city’s history on the ice into consideration.

Following, in reverse order, are the top 25 cities in our rankings for Minnesota’s hockey capital. 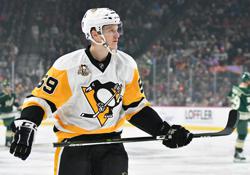 A suburb of St. Paul, Woodbury (pop. 69,756) enters the rankings thanks to its 25 natives who played college hockey in 2017-18, including 21 at the Division III levels. Woodbury is also home of four pro hockey players, most notably Pittsburgh Penguins forward Jake Guentzel, and a state-leading seven players in the NAHL. 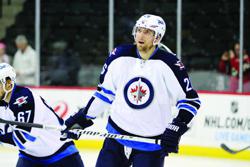 Plymouth (pop. 78,395) lays claim as the Minnesota city to have produced the most professional hockey players in 2017-18 (14, tied with Duluth). The west metro suburb also boasts 17 college hockey players, including six who played at the Division I level. Plymouth’s total would certainly have been higher if it was home to a youth hockey association as neighboring Wayzata gets to take credit for 26 Minnesota Hockey state titles, many of which were earned with Plymouth natives on team rosters.

A northwest  metro suburb (pop. 71,066), Maple Grove earns its spot due to its 17 college hockey players – 14 of whom are women – and 11 Minnesota Hockey state championships (we gave MG credit for the titles even though its association is shared with Osseo). The home of the Crimson could lay claim to seven junior hockey players during the 2017-18 season. 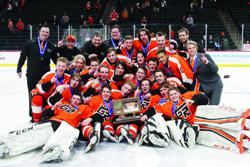 The home of the Thunderhawks, Grand Rapids (pop. 11,242) enters the rankings thanks in part to its nine all-time Minnesota Hockey state titles and four MSHSL boys’ state championships. This northern Minnesota city had one NHL player in 2017-18 in Arizona Coyotes defenseman Alex Goligoski, and can also claim eight NHL alumni. Grand Rapids also had nine junior hockey players last season, including four each in the USHL and NAHL. 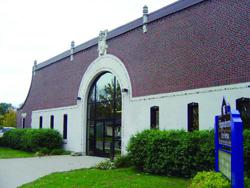 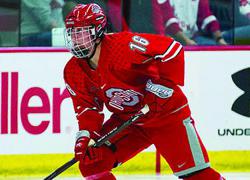 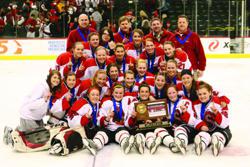 A picturesque city on the shores of the St. Croix River, Stillwater (pop. 19,368) enters the top 10, in part, to its 27 college hockey players during the 2017-18 season, a total that ranks tied for third in the state. Stillwater led all cities with 12 Division III women’s players. The home of the Ponies also has produced two MSHSL girls’ state titles, three Minnesota Hockey state championships and one NHL alumnus (Adam Berkhoel). 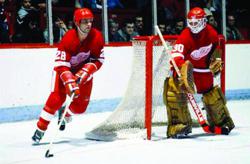 Minnesota’s largest city takes the No. 7 spot despite only having four players in pro hockey last season. Minneapolis (pop. 422,331) owns its spot in the rankings, in part, to its 11 indoor ice sheets and 19 college hockey players in 2017-18. The City of Lakes boasts 17 NHL alumni, including Stanley Cup champions Tom Chorske, Cully Dahlstrom and Virgil Johnson, and U.S. Hockey Hall of Famers Reed Larson, Mike Ramsey and Dahlstrom. 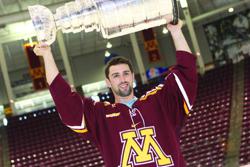 Boasting a state-leading four players in the NHL last season, Eden Prairie (pop. 64,400) takes the No. 7 spot in our rankings. Prior to making it to the pros, the Eagles are also successful, claiming 11 all-time Minnesota Hockey titles and five high school crowns. After high school, EP sends players to the next level with eight players in juniors, 19 in college and 10 in the pros in 2017-18.

If it’s college hockey players you want, then head to the southern metro as Lakeville (pop. 63,748) produced 30 collegiate skaters in 2017-18 (second only to the No. 1 city on our list). That number includes 15 Division I players. Home to the  undefeated 2015 MSHSL Class boys’ state champion Lakeville North Panthers, this suburb can boast four indoor ice sheets and six all-time Minnesota Hockey titles. Lakeville placed three players in the NHL last season in Justin Kloos, Charlie Lindgren and Brady Skjei. 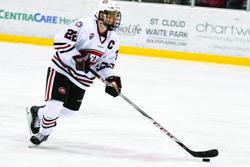 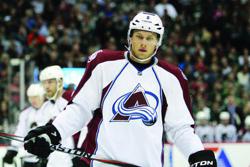 The largest suburb in Minnesota, Bloomington (pop. 85,866) may be the former home of the Minnesota North Stars, but it’s the current home to 10 pro hockey players, including Colorado defenseman Erik Johnson. Bloomington can claim another nine NHL alumni, including Stanley Cup champions Ben Clymer, Don Jackson and Tom Kurvers. Home to the Bloomington Ice Garden, a training spot of the 1980 U.S. Olympic hockey team, Bloomington has captured 11 Minnesota Hockey championships and seven MSHSL state titles, including six by the Jefferson boys’ hockey program. The 2017-18 season also saw 20 Bloomington natives play college hockey, with 16 of those at the Division III level. 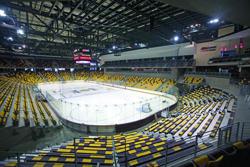 A hockey hotbed on the shores of Lake Superior, Duluth (pop. 86,066) excels at moving its natives to the next level. In 2017-18, Duluth ranked first in pro hockey players (14), seventh in college players (24) and ninth in junior players (7). Natives of this northern city have captured their fair share of state championships, with 15 Minnesota Hockey titles and three MSHSL boys’ state crowns (all by Duluth East). Duluth had three NHL players in 2017-18 (Derek Forbort, Dom Toninato, Andy Welinski), and boasts nine NHL alumni, including 1993 Stanley Cup champion Sean Hill. 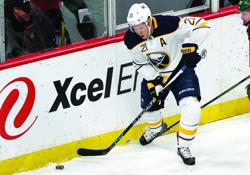 It probably should come as no surprise that Edina (pop. 51,958) lands atop our rankings for the capital of hockey in Minnesota. The home of the Hornets leads the state with 35 college hockey players (including 15 Division I men), 14 MSHSL state championships and 62 Minnesota Hockey state titles. Edina had two players in the NHL last season in Steven Fogarty and Anders Lee, and claims 10 NHL alumni, including three-time Stanley Cup champion Bill Nyrop and 1986 Stanley Cup champion David Maley. Home to the largest youth hockey association in the state, an Edina team has captured a Minnesota Hockey state championship for 15 consecutive years. Likewise, an Edina boys’ high school hockey team has won a record 12 all-time MSHSL state tournaments. Twelve Edina natives played junior hockey last season, including a record five in the USHL. This southwest metro suburb has been churning out elite hockey talent for decades, and it shows no sign of stopping anytime soon. For that reason, it’s time to crown Edina as Minnesota’s Hockey Capital.