The year of the Maverick? 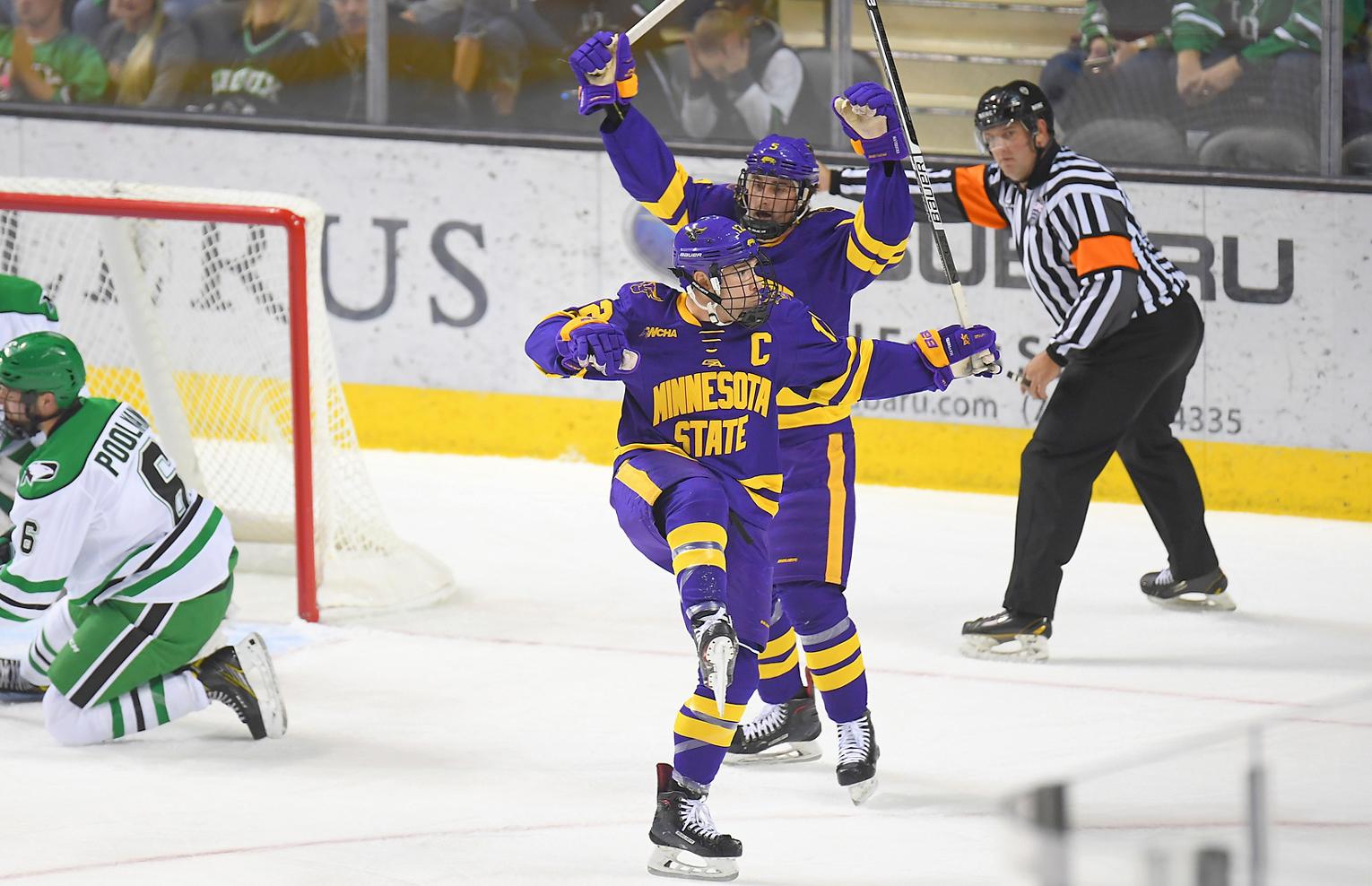 When Minnesota State junior forward Parker Tuomie found himself tied to the weight room this past summer, you didn’t have to remind him that C.J. Suess – the All-American talent and 2017-18 WCHA Player of the Year – had graduated and was now playing professional hockey. He was well aware.

When senior forward and Minnetonka native Max Coatta was sweating through one final stickhandling drill a few months ago and his body had nearly had enough, you didn’t have to tell him about the fact that the Mavericks had lost three all-everything seniors to graduation – Zeb Knutson, Brad McClure and Connor LaCouvee – and another All-WCHA defenseman in Daniel Brickley to the pros.  He already knew that.

When Mavericks head coach Mike Hastings – now in his seventh season in Mankato – was looking into his crystal ball and filling in potential line combinations for the 2018-19 season, you didn’t have to point out that MSU would be missing 142 points of offense from last year’s WCHA regular season championship team. The veteran coach saw it coming. But here’s the thing: Hastings was prepared – they all were.

Now months later, despite fielding a roster minus the names of Suess, Knutson, McClure, Brickley and LaCouvee, the 2018-19 Mavericks are once again skating circles around their opponents – especially on offense. Last season, MSU not only led the WCHA, but also the nation in scoring. This season, through six games, the Mavericks are 5-1-0 and averaging 4.3 goals per contest which puts them third in the WCHA and eighth in the nation in that category. Already, 16 different players on the Maverick roster have scored at least one point and 15 of them have two points or more. If powerful was the word used to describe the 2017-18 version of Maverick hockey, the word this season (albeit early) would be explosive. That and balance.

“We hope to become and continue to be a four-line team,” Hastings said. “I’m hoping that our depth continues both offensively and defensively. We’ve been able to share the ice time throughout our lineup. Our so-called bottom six have had equal or greater ice time than our guys in the top six, depending on what the game calls for. We have been able to roll six and sometimes seven defensemen back at the blue-line. I’m hoping that continues to be a strength for us and something we can turn to so there is not one, two or three guys that have to carry that load consistently.”

To date, several players have been shouldering the load for Hastings and his staff. Tuomie, a junior from Bremerhaven, Germany who had 66 points in 85 career games, leads the Mavericks with 11 points (4-7--11) which puts him third in the nation in points. Last weekend against Alaska, Tuomie notched five points (all assists), helping MSU to a weekend sweep over the Nanooks.

Right behind Tuomie on the stat sheet is a familiar name in Marc Michaelis. The junior and fellow Germany product was named to the preseason All-WCHA team after tallying 40 points in 36 games one season ago. Michaelis has seven points in six games. Senior co-captain Max Coatta has six points in six games, including four goals.

“C.J. was an All-American – you can’t replace those guys, but I think it speaks to the depth of our team,” Coatta said when asked about replacing the lost firepower. “We have a bunch of different guys that can step up on any given night. After those guys graduated, I knew I had to step up along with other guys on the team to try and fill that void as much as we can.

“I think the depth of our team is really strong. We can play four lines and six defensemen. If you can do that, you are going to be tough to play against, and I think that’s what we want our identity to be. At that point it doesn’t matter which line you are on, you’re playing with great guys and anyone in the lineup can get the job done.”

“That’s part of college hockey, you are always going to lose your older guys,” Tuomie said. “For us, we knew it all along that those players wouldn’t be there anymore and I think the guys that have to fill their shoes have been doing a great job of saying hey, it’s my turn now. I think that’s always a mindset we have here at Minnesota State. We have a lot of good players that aren’t even in the lineup week in and week out and they are just waiting to get an opportunity, and it’s up to them to take advantage of that opportunity.”

Opportunity is all around, and at least so far, the Mavericks are seizing it. Sophomores Connor Mackey (1-5--6) and Jared Spooner (1-5--6) are coming off successful freshman campaigns and two of eight freshmen who saw playing time last year for MSU. Three of the fabulous freshmen were named to the WCHA All-Rookie team (Jake Jaremko, Mackey and Reggie Lutz) last year. Others include juniors Charlie Gerard (2-3--5) and Ian Scheid. Last weekend against Alaska, Scheid struck for two goals and one assist. And speaking of freshman, you can also throw newcomer Julian Napravnik into mix.  The freshman from Germany (yes, another Germany product) scored his first two goals of his Maverick career against Alaska last Friday in MSU’s 4-0 win and added an assist in Saturday’s 3-1 victory.

Talent is one thing, but anyone who knows hockey understands that a winning formula has to go beyond the speed and the strength of a shot. So what is it (so far) about this year’s squad that has helped them rise to the top of the college hockey mountain through the first month of the season? You get a different answer with each person you ask.

“I think our work ethic,” Tuomie said. “Every day we show up to the rink and we realize that every other team in the nation is trying to get better, so it’s our job to come to the rink being prepared. It starts with our coaching staff. The plans they lay out for us day in and day out help us prepare. Also, our compete level in practice goes a long way. We practice as hard as we play so the games seem pretty normal for us when they come up.”

“It’s early and we still have a lot to learn. Winning those close games and understanding how important that is, that’s going to be important. Last year we lost to Duluth by one goal (in the NCAA Tournament) and something we always talk about, hockey sometimes comes down to being a game of inches. Just having a good locker room full of good character, I think that’s something that is important and something I like a lot about this team.”

Yes, it’s early.  Still, it’s hard to ignore Minnesota State’s start and the obvious fact that while good, as the season moves forward they will most certainly continue to get better. With series sweeps over Boston University and Alaska, and a series spilt at North Dakota already under their belt, the Mavericks now set their sights on the University of Minnesota this weekend and a home-and-home series with the rival Gophers. From there Minnesota State jumps head first into their conference schedule with 10 straight WCHA games before locking horns with Minnesota Duluth in late December.

Fans in Mankato feel that while last season belonged to the Bulldogs, this season just might be the year of the Maverick. Judging by what we have seen so far, how can you blame them?