The Ponies are starting to gallop 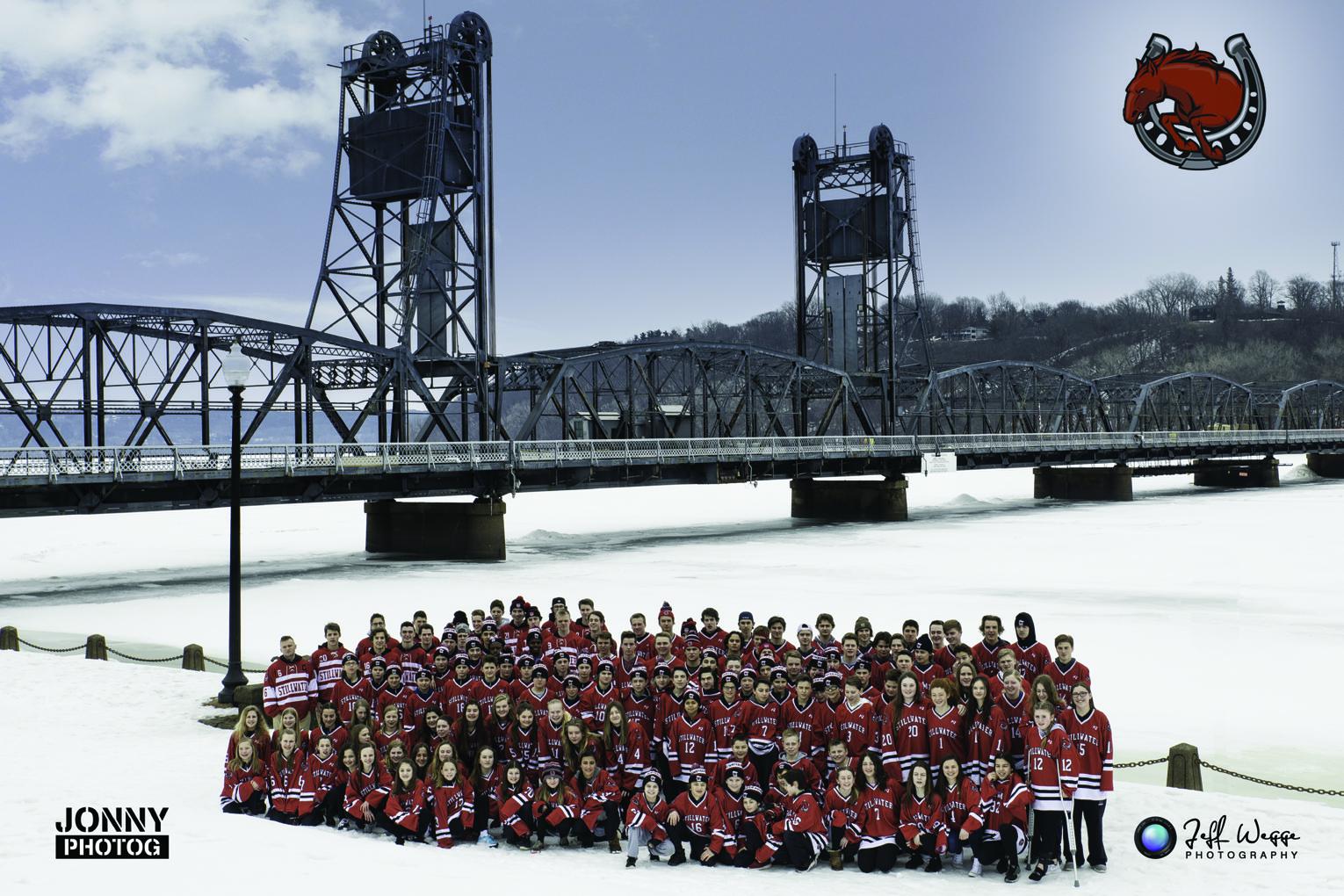 Anyone who has ever been a part of a hockey association knows it takes a village to make it work. In Stillwater, the Stillwater Area Hockey Association (SAHA) takes that to a whole other level. With more than 35 teams from Intermediate Mites all the way up to the U19 level, SAHA has quietly become one of the most successful associations in the state. In 2017-018, Stillwater had nine different teams advance to their respective state tournament. OK, maybe they started quiet, but based on the progress the program has made over the past several years, the Ponies program has started to gallop with no signs of slowing down anytime soon.

The basic model SAHA has perfected revolves around player and community development – two concepts that are not necessarily new, but difficult to master. Most agree that the player development model began to change a handful of years ago when former Gopher Bill Kohn moved to the Stillwater area. Coming with him was a proactive desire to develop players from the ground up. Soon after, Eric St. Martin jumped on the train and the Ponies began to roll.

The concept was to find professional training programs and professionals to teach them, and instead of the association going to them, the specialty training started to come to Stillwater.  Still today, Kohn (SAHA Boys’ Hockey Director) and St. Martin (SAHA Girls’ Hockey Director) spend countless hours securing some of the best hockey development training the state of Minnesota (and beyond) has to offer, and in each case, the association pays to bring those tools right to the Ponies front door.

“It started with Bill Kohn, our director of boys’ hockey,” said Tim McGlynn, SAHA President. “He came from outside of the community. He moved from St. Paul to Stillwater and he brought what he had already developed to our program. It was at that point six years ago when he began to bring new ideas and then as other parents of hockey players got involved with hockey backgrounds. They brought new ideas that hadn’t been thought of before to optimize what we already had.

“It comes down to the focus we have with the development of kids at all levels. We have added quite a bit of additional skill development – training from outside providers as a complement to what we do as teams throughout the season. I think that has really helped to elevate each player’s skill set, and that was something Bill Kohn and Eric St. Martin had implemented a few years back.”

For example, while working with M.E.G.A Goaltending, each association goalie gets two individual sessions with an instructor each month. Players also get 1-2 sessions per month with OS Hockey and 1-2 sessions with the ReadReact program as well.

“I have heard time and time again from some of the players I have coached or know on summer AAA-type teams that they get their development during the summer time and then when they go back to their associations in the winter, many of them say it’s a letdown,” St. Martin said. “They are taking a step back in the winter because they don’t get the same training in the winter that they get with the professional summer AAA-type of programs. I’m very proud with the fact that I don’t think any of our kids can say that. I think that’s very unique. We’re not taking a step backwards in the wintertime, we are actually taking a step forward and we think the development is the best around and that is occurring here at Stillwater.”

The proactive approach is working. The nine teams (six boys, three girls) who advanced to last year’s state tournament was an association record and two squads (Junior Gold 16U Red and 12U B Red) were both crowned state champs. In addition, 15 separate teams advanced to the Minnesota State Hockey Regional Tournament In 2017-18. Other trophies handed out last year included a second-place finish at state for the Junior Gold A squad and a third-place finish for the Junior Gold 16U Black team.

“This was a fantastic accomplishment for our youth hockey program,” Kohn said. “We are sending a record number of teams to the state tournament. We couldn’t be more thrilled for our community and to see that the success of our program continues to grow.”

“I think that is the reward of all of the hard work that has been done over the last half decade,” McGlynn said. “It’s these outside companies that we pay additional amounts to – programs who we spread throughout the whole season so we can break up the team work we are doing in practices and games. We evolved into the way we are doing things now. It’s just an additional way of helping these kids get better.

“I think the recent results show how much these programs are benefiting the kids on the ice. I think it also speaks to the connection we have with the high school program and what they want to see in athletes coming up. It’s really an army that is required to run a non-profit organization and a hockey association of all volunteers. I just think it’s the fruit of all of the hard work of those who have put lots of hours in as they give back to the kids and the community.”

Which leads to the community development part of the equation. McGlynn, who took over as association president in May, was previously a coach for the association for nearly a decade before accepting his most recent challenge. A 3M business manager by day, McGlynn points to the wide range of professional talent and experiences that each of the board members, coaches and volunteers bring to the table as a reason why SAHA continues to grow and excel. Running an association takes resources, time, creativity and lots of bodies who all work together with one goal in mind- community.

It’s also expensive. In 2016-17, in an effort to advance the association in both of those categories, SAHA developed a fundraising committee called the “Playmakers.” The group came together with the mission of building a tight-knit community within the association, emphasizing the core values SAHA wanted to promote on and off the ice. In short, with over 700 kids skating within the association, the group wanted to develop an atmosphere where parents and kids throughout SAHA got to know and interact with one another and not just the parents and skaters on the specific teams. After starting with a basic parents night event, the Playmakers have since taken off, hosting annual events such as a yearly golf tournament and a “Bad Moms Christmas” movie night. They also grabbed hold of the “Love Your Melon” beanie campaign and quickly sold over 400 beanies with “Stillwater Ponies” written on one side of the hats. From there, the Playmakers developed “Swag Gear,” consisting of association apparel from blankets to socks to umbrellas. To say that the “Playmakers” have been a success would be a dramatic understatement.

“The thing that has been so rewarding has been to see our community come together and embrace this idea, that there was a desire for more community within our organization and to build relationships outside of the rink,” said Jill Gerard, one of five on the Playmakers committee and also the SAHA Inter-association Director. “We have had great success in terms of participation with our membership. We have also had great success with other parents joining in. Just to see how people respond to our events and to the efforts we are doing, that they love this idea of getting to know people in different ways and getting to know new people and really building that positive community within our association. It’s been an amazing experience, and then to raise money for the association just makes it that much better.”

“The Playmaker fundraising group’s objective is to create a community and a hockey culture with the right principles we stand for,” McGlynn said. “Part of that yields fundraising and dollars, but it also creates a culture and something that every member of the association can be proud of and be happy to say they are a Pony.”

There is plenty to be proud of and the Playmakers are far from finished. Coming to the association this week will be a new addition to the team in the form of a mascot. Skating on the ice for the first time in 2018-19 will be “Big Red” – the brand new SAHA mascot who will fittingly be a large red pony. Gerard and company hope Big Red will be an added incentive for the SAHA skaters as well as providing another face to the association.

“We believe a key component of building a successful program is our focus and dedication to the development of all players,” McGlynn said. “We strongly believe in the importance of providing every player at every age group and level with as many resources as possible to help them develop and grow their games and abilities to their fullest potential.”

It appears to be working.