Paul Fenton has no intention of failing after waiting so long to become an NHL GM. 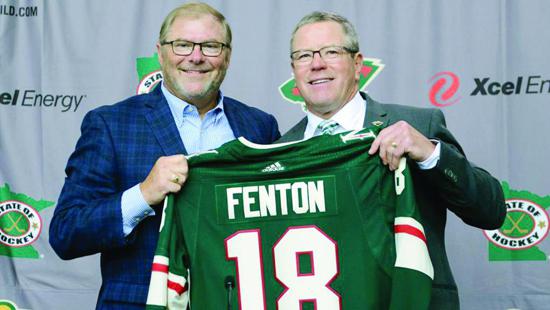 Before we even started the interview, new Minnesota Wild General Manager Paul Fenton was more than happy to talk about our shared northeast United States upbringing. He grew up in Springfield, Mass., just about an hour and a half from my hometown of Selkirk, N.Y. Instantly, we talked about rivalries in the AHL between Springfield and Glens Falls. He regaled me with stories of how he got his call up to the NHL and playing alongside Marcel Dionne. His love for the game and the memories that it’s given him were clear and infectious. It was also what has given him success and a desire to be in hockey management at the highest level.

If good things truly do come to those who wait, then Fenton should have the time of his life in Minnesota. He was hired by owner Craig Leipold on May 21 away from Nashville where he’d been the assistant GM for the last 12 years and with the organization in other roles for the past 20.

“Past (job interviews) that I had gone to I don’t know what happened,” Fenton said. “Maybe I was trying too hard. With Craig, there was already a comfort level there. I already knew what he was like as a person. I have had several conversations with him, socialized with him and saw him as an owner in a light that I’d like to work for someone like that.”

Leipold has been familiar with Fenton from his days as owner of the Predators, before he sold the team in 2007. Even then, he knew of his work ethic and passion for the game and that it could someday translate to him being a good GM.

“I know that Wild hockey fans are going to love Paul’s infectious passion for the game and unsurpassed work ethic,” Leipold told NHL.com. “He’s the right person to deliver a Stanley Cup to the State of Hockey.”

That’s pretty high praise from an owner who was very adamant about the type of General Manager that he was looking for.

“This is not a rebuild,” Leipold told reporters back on April 23 when he decided not to give Chuck Fletcher another contract. “And I’ll be very direct about that when I’m interviewing a general manager.”

It seems Fenton agrees with that sentiment - that this Wild team does not need to be a complete tear down to become a contender.

“Leadership and youth,” Fenton said of the strengths of the current roster. “They go hand-in-hand and you’re not gonna win in this league unless you have the correct leaders that have been put into place. And you have to implement all of these young kids now. It’s just the nature of our game. Before the salary cap, you could find a way to buy your team. Now you have to develop your team and you have to replace parts all the time.”

Fenton, who will hit the ground running with less than a month until the NHL Draft, has a lot of tough decisions to make – probably first and foremost on restricted free agents Jason Zucker and Matt Dumba. Others like Charlie Coyle and Nino Niederreiter are possibly some of the most tradeable assets the team has. But to make deals, keep everybody happy and keep the team under the cap, it will take creativity and an aggressive approach, one that Fenton has been proven to possess. Look no further than the deal he helped make in Nashville that sent Shea Weber to Montreal in exchange for one of the game’s best young defensemen, P.K. Subban.

“I have a creative mind when it comes to hockey analysis,” Fenton says. “It seems to have done really good in Nashville. Will I be aggressive? If the opportunity is there, then we will be aggressive.”

Certainly, if he chooses to, he’ll have the backing of the ownership. Leipold has proven to open his checkbook when needed, whether it was signing Zach Parise and Ryan Suter to dual $98 million contracts or making a deal to get goalie Devan Dubnyk. That willingness to do and spend what it takes to win is what made this franchise and situation such a desirable one for Fenton.

“Not everybody in the league does that,” Fenton said with a smile of Leipold’s willingness to pay for talent. “Everybody has their own restrictions and what have you. Craig has an open mind on how you do things and he’s going to give me the responsibility to let me handle the hockey people to be able to put the improvements in place for us.”

While there is no timetable for those improvements, Fenton knows that Leipold and the fanbase are anxiously awaiting a Stanley Cup in the State of Hockey and that comes with a lot of pressure. But Fenton can keep all of that in perspective.

“Our ultimate goal is to win a Stanley Cup,” Fenton says. “I’m going to do everything in my power to bring that here. It’s tough. Professional sports are tough. As I said, I am fortunate to be in it and I want to have that challenge.”

It’s a challenge that has been a long time coming. But it’s one that Fenton has no intention of failing after waiting so long to get it.