In order to have an effective backhand, you need to get your top hand away from your hip. 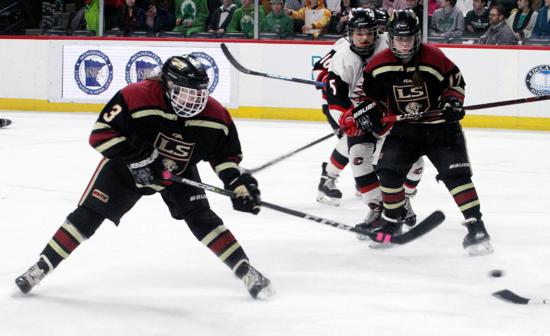 The backhand is one of the most feared shots in the world of girls’ hockey. Goalies hate backhands because they can be very unpredictable when done well and players tend to hate them because they aren’t very good at them.

The main reason that girls struggle with their backhand shot is that they keep their top hand too close to their hip. In order to shoot an effective backhand, and make hard and accurate backhand passes, you need to get your top hand away from your hip.

What do I mean by that? If you are a right-handed shot, your left hand is your top hand. Most female hockey players (for some strange reason I still can’t quite figure out) hold their top hand very close to their hip. In this case of the righty, it would be on their left hip. This means that both hands and the stick are being carried very close to the body and that the stick is most likely nowhere close to the ice (but that’s another topic entirely).

Most young players shoot what I like to call a “pitchfork backhand.” Their blade never cups the puck at all, they don’t start with the puck behind their back foot and they basically try to lift the puck into the air by flinging their stick as high and hard into the air as they can. This is a great way to get the puck into the air quickly – either to clear the zone as a defenseman or to put the puck in the top of the net while standing near the blue ice for a forward.

Getting your top hand away from your hip is something that I am constantly telling my players to do to help their passing, stickhandling and shooting. Sometimes I feel like a broken record out there, repeating myself over and over again. It’s one of those little details that makes a huge difference in the way you play the game. So as you are practicing your shot in your driveway this summer,  I want you to think about making this little adjustment to your game. It may feel a little awkward at first if you aren’t used to it, but I can guarantee you that it will have a positive impact on your performance.

Having elite shooting and stickhandling skills will give you a serious advantage over the competition. The Total Female Hockey Elite Shooting & Stickhandling Video Series gives you an eight-week step-by-step plan for taking your stick skills to the next level without having to even step on the ice. Visit www.totalfemalehockeyclub.com/products/elite_shooting_stickhandling. Kim McCullough, MSc, YCS, is an expert in the development of aspiring female hockey players. She is a former NCAA Division I captain at Dartmouth and played in the National Women’s Hockey League for six years. She is currently the Head Coach of the Toronto-Leaside Wildcats in the Provincial Women’s Hockey League and is the Director & Founder of Total Female Hockey.