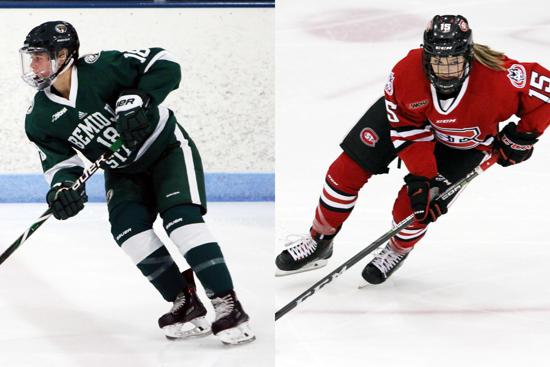 Two of the top women’s teams from the country’s premier hockey conference will battle in the annual U.S. Hockey Hall of Fame Museum Women’s Face-Off Classic, set for Tuesday, Nov. 20, at 6 p.m., at Essentia Health Sports Center in Brainerd, Minn.

“We are thrilled to playing in this game in Brainerd,” said Jim Scanlan, Bemidji State Head Coach. “They have a terrific hockey community and they have always supported their teams with pride and passion that northern Minnesota is known for.”

St. Cloud State Head Coach Eric Rud said, “This is a great opportunity for us to bring women’s college hockey to young girls and college fans that might not have had a chance to come out and watch a game in person. I know people will be impressed with the skill of the college game and we can’t wait to be a part of this event.”

The women’s Hall of Fame game will raise awareness for the U.S. Hockey Hall of Fame Museum in Eveleth, Minn., along with bringing women’s Division I hockey to a local community.

”We are pleased to be part of this game and I am personally excited to be able to watch this game in our barn,” said Brainerd Amateur Hockey Association President Sam Blum. “The game gives us a unique opportunity to create access for spectators to watch a DI women’s hockey game in our area.” A capacity crowd is expected for the game.

Proceeds will go to Sharing Bread Soup Kitchen in Brainerd.

“This is a fantastic organization that helps out those in need on a daily basis,” said Jim Ernster, Brainerd High School Girl’s Hockey Head Coach. “A safe, inviting atmosphere allows people to get hot meals seven days a week, no questions asked. To have the opportunity to help out an organization that embodies humility and grace is indeed a privilege.”

Additional details of the event will be announced in coming months.

ABOUT THE MUSEUM
The U.S. Hockey Hall of Fame Museum (www.ushockeyhall.com) was established in 1973 with the goal of preserving the rich history of ice hockey in the United States while recognizing the extraordinary contributions of select players, coaches, administrators, officials and teams.