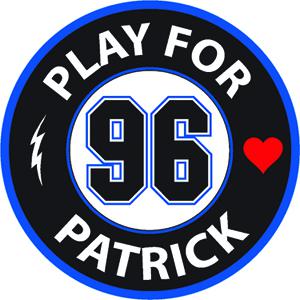 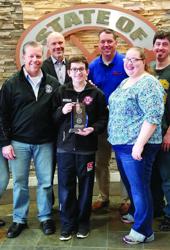 Joel Seethaler, a defenseman for Elk River PeeWee B2, has been named the 2018 recipient of the Patrick Schoonover Award, an annual award named in honor of the Eastview Bantam AA player who passed away during a game during the 2014-15 season. The award is given to the Minnesota PeeWee or Bantam hockey player who best exemplifies Patrick’s ideals of hard work, high character, loyalty, honesty, humor and athletic achievement.

Seethaler was nominated by his coach, Chad Peterson. Peterson said that Joel was the perfect representative for the award.

“On the ice, Joel is a defender, leader and excellent teammate,” Peterson wrote in his nomination of Seethaler. “Off the ice, he is a leader, defender, excellent friend and classmate, and loving son and grandson. He is a hockey player who displays great character as a teammate on and off the ice, which is why I made him one of our team captains this season.

“Joel is an exceptional hockey player, and just an awesome kid away from the rink. He’s also a great and loyal friend to his buddies. Joel is a student of the game, and loves everything about the game of hockey – practices, games, competition, tournaments and the lasting friendships he has made with his coaches and teammates. Joel works hard, has fun, and is ALWAYS determined to be better both on and off the ice.”

Seethaler was presented with the 2018 Patrick Schoonover Award at the April 2 Minnesota Wild game vs. Edmonton. He made the “Let’s Play Hockey” announcement with the Schoonover family, watched the game from a suite with his parents Aaron and Chrissy, and was recognized by Fox Sports North between the second and third periods. Seethaler will also be recognized in the Patrick Schoonover Award’s permanent display at the Xcel Energy Center.

“While on the ice, Joel puts forth 100 percent every time he laces up his skates, whether for a game, practice or helping out every once in a while with the Elk River Learn to Play Hockey program,” Chrissy Seethaler said. “After any game, win or lose, he is very humble and doesn’t want to hear or talk about his personal achievements, but rather prefers to focus on the team play and what the team accomplished or didn’t. My husband and I are extremely fortunate to have Joel as our son who, like Patrick, lives and breathes hockey on and off the ice.”

“It’s challenging to select a winner, especially when there are so many worthy candidates,” Mike Schoonover said. “They are all wonderful kids and they make the State of Hockey a great place to be. Gayle and I would like to congratulate Joel Seethaler as this year’s Patrick Schoonover Award winner. Joel shares many of Patrick’s attributes. He is kind-hearted and humble. He is passionate about playing hockey and being with his friends. And he is an excellent leader and hard worker.”

The Patrick Schoonover Award is presented by Let’s Play Hockey and the Minnesota Wild.