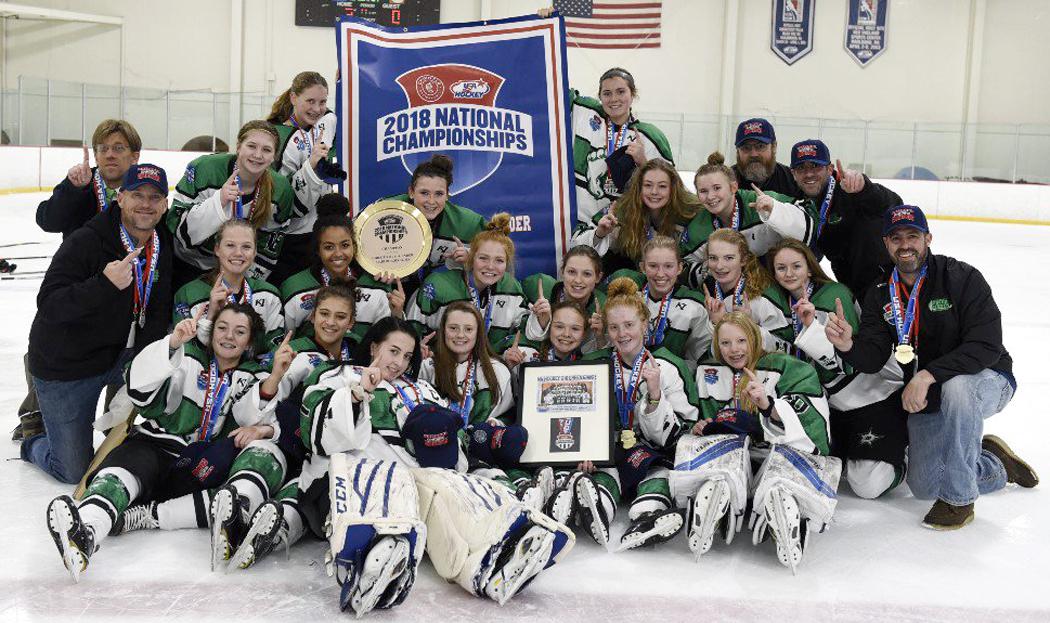 The Green Giants, comprised of players from Minnesota Hockey’s District 10, claimed the Girls Tier I 14U National Championship with a 3-0 win over Assabet Valley (MA). The victory was the culmination of a dominating pre/post Tier I season in which the team only lost one game in regulation (Minnesota Polars of Districts 3 & 5) and outscored their opponents 142-20 in 22 games together.

The Green Giants went 2-0-1 during pool play with their only loss coming in a shootout against Syracuse Valley (NY). Back-to-back wins over Chicago Mission (5-3) and Chicago Young Americans (8-0) in the quarterfinals and semifinals, respectively, earned the team a place in the championship game. In the title game, Joslin Mumm gave the Green Giants an early lead on a shot from the point, and they never looked back, going on to record their third shutout in just six games.

“We are extremely proud of the Green Giants and what they accomplished this season,” said Mike MacMillan, High Performance Director for Minnesota Hockey. “When we put these leagues together, we were focused on providing an opportunity for players to train and compete at a high level without leaving home. An added benefit of this league is the ability for our players to compete for a USA Hockey National Championship and these girls seized the opportunity and delivered an outstanding performance in Massachusetts. Congratulations to all of the players, coaches, parents and district staff on an outstanding season!”

The Shattuck-St. Mary’s Girls Prep team continued their dominance at the Girls Tier I 19U level, going undefeated in six games and winning their third consecutive national title 5-1 over Belle Tire (MI).

Minnesota Hockey’s Tier I structure was established in 2016 to enhance Minnesota’s community-based association and high school model by bringing together the most talented 14, 15 and year olds from all over Minnesota for highly competitive League play and providing a path to compete in the USA Hockey Tier 1 National Championships. The League schedule is designed to allow participants to play for their association or high school team.