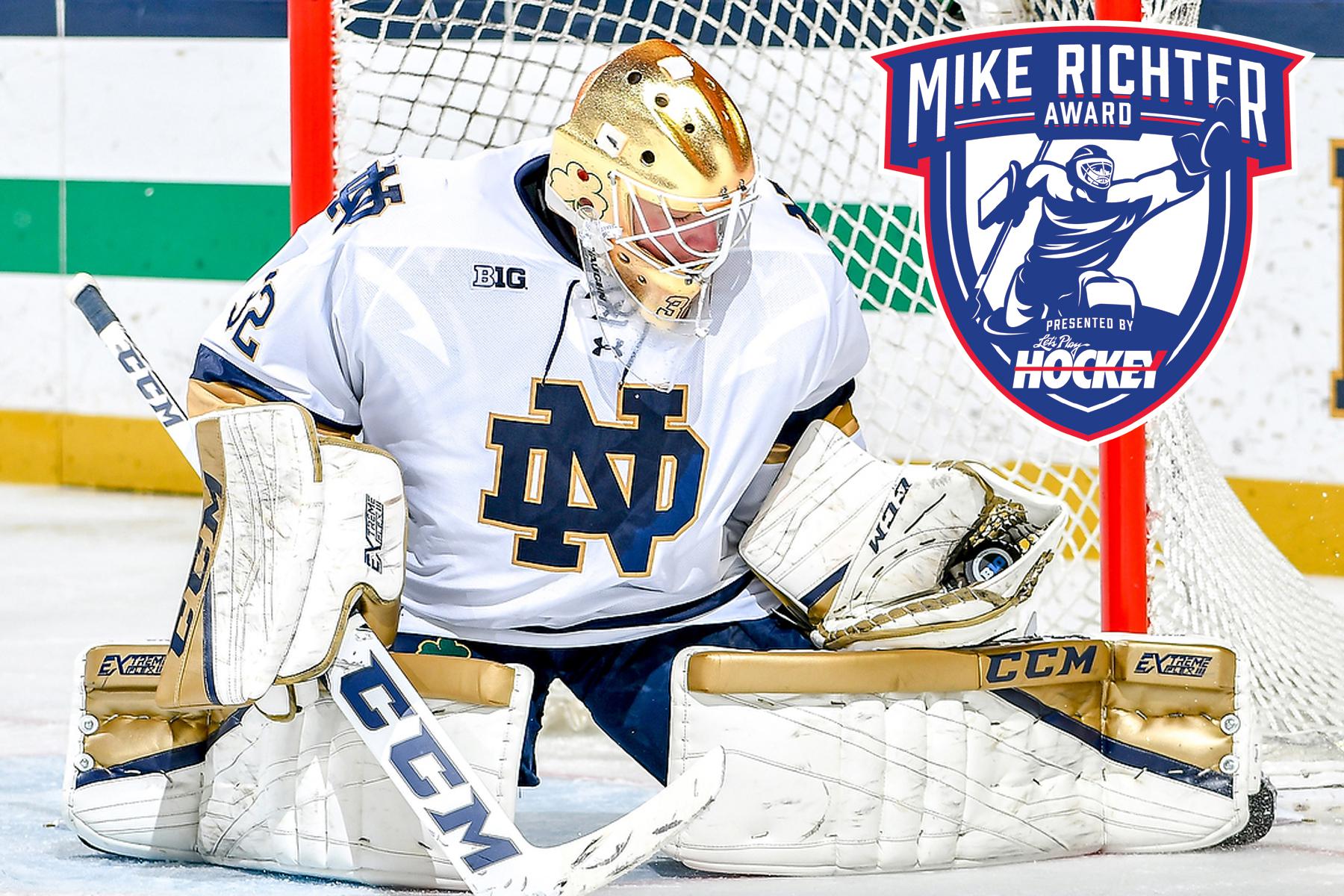 ST. PAUL, MINN. — Sophomore Cale Morris of the University of Notre Dame has been named the winner of the 2018 Mike Richter Award as the most outstanding goaltender in NCAA men’s hockey. Morris was presented with the award by Mike Richter tonight in St. Paul, Minn., site of the 2018 NCAA Frozen Four.

A native of Larkspur, Colo., Morris backstopped Notre Dame to a runaway win of the Big Ten regular season championship, the Big Ten tournament title and a stellar run to the 2018 national championship game. Morris led the Big Ten in save percentage (.944), goals-against average (1.94), shutouts (4, tied with MSU’s John Lethemon), wins (27), winning percentage (.786) and saves (1,169). The Big Ten Player and Goalie of the Year owns a 27-7-1 record and ranks first in the nation in save percentage, wins, winning percentage and saves, eighth in goals-against average, 10th in minutes played (2134:11) and tied for 12th in shutouts.

After playing one period (19:43) in Notre Dame’s first game of the 2016-17 season in mop-up duty for starter Cal Petersen in an eventual 9-2 win over Arizona State (Oct. 7), Morris has burst onto the scene with an impressive sophomore season for the Irish. He has allowed two goals or less 24 times and has posted a .930 or better save percentage in 26 games this season. He has stopped 30 or more shots in 24 games, including a career-high 55-save performance in a 2-2 tie at Penn State on Feb. 3.

Currently, Morris’ save percentage for the 2017-18 season would set the Notre Dame single-season record, while his goals-against average would rank third all-time and his total saves would rank second in the single-season record book. His 27 victories are the second-most in school history, trailing only 30-win seasons by David Brown (2006-07) and Jordan Pearce (2008-09). A Hobey Baker Award top 10 finalist, Morris is a business major at Notre Dame.

The other finalists for the 2018 Mike Richter Award were Matthew Galajda of Cornell, Tanner Jaillet of Denver, Colton Point of Colgate and Cayden Primeau of Northeastern.

Candidates for the Mike Richter Award were determined by nominations from all 60 NCAA Division I men’s hockey head coaches. The finalists and winner were selected by a committee of coaches, scouts and members of the media.

Largely considered one of the top goaltenders of the last 30 years, Mike Richter played youth hockey in Pennsylvania and New York before heading to the University of Wisconsin to stop pucks for the Badgers. In two seasons in Madison, Richter was named the 1986 WCHA Freshman of the Year and earned All-WCHA second team honors in 1987.

After two seasons in the IHL, Richter made his NHL debut in the 1989 Stanley Cup Playoffs with the New York Rangers. Playing full-time for the Rangers beginning with the 1990-91 season, he was a finalist for the Vezina Trophy as the league’s top goalie in just his second full season in the NHL.

After splitting goaltending duties with veteran John Vanbiesbrouck for several seasons, Richter was made the Rangers’ primary starter for the 1993-94 season. He went on to post a career-best 42 wins and 2.57 goals-against average that year as the Rangers won the Presidents’ Trophy as the league’s top regular-season team. In the playoffs, Richter backstopped New York to the Stanley Cup Finals where Rangers defeated the Vancouver Canucks in seven games to win their first Stanley Cup since 1940. During the 1994 Stanley Cup Playoffs, he became the eighth goaltender to post four shutouts in one playoff season.

Consistently ranked one of the world’s best goaltenders, Richter played in 666 games during his 14-year NHL career, all with the Rangers. His 301 wins rank second in Rangers history and he was named an NHL All-Star three times in his career. Richter’s jersey (#35) became the third number retired by the Rangers at Madison Square Garden on Feb.  4, 2004.

Richter was also a standout on the international stage, tending the net for Team USA for parts of three decades. He is one of just 10 Americans ever to compete in at least three Olympic Games (1988, 1998, 2002), including in 2002 when he helped the team capture a silver medal in the last game ever coached by Herb Brooks. In addition, he led Team USA to the World Cup of Hockey championship in 1996 and was named the tournament’s MVP. He also played in two IIHF World Junior Championships (1985-86), three IIHF Men’s World Championships (1986-87, 1993) and the 1991 Canada Cup. 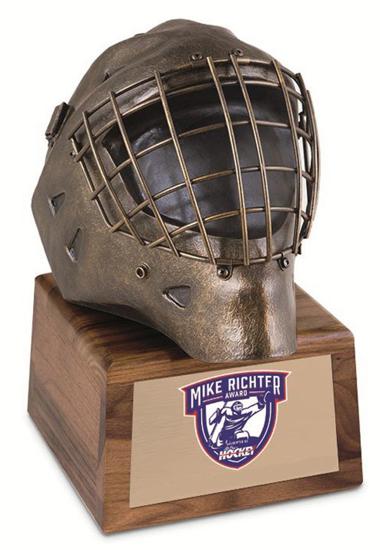