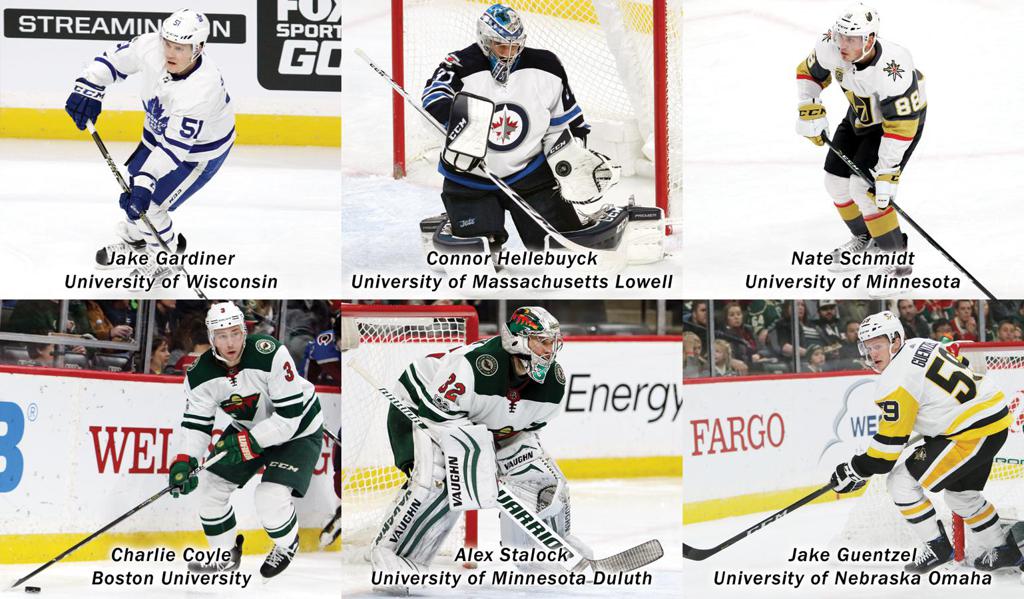 If you’ve watched nearly any NCAA sporting event on television in the past several years, you’ve seen the ad. You may even be able to recite the tagline: “There are 380,000 NCAA student-athletes, and just about all of them will be going pro in something other than sports.” It’s a noble campaign directed at educating the masses that most athletes in college will see their athletic careers come to an end at graduation.

In the world of NCAA hockey, the vast majority of players on the 60 Division I and 88 Division II/III men’s teams will not make the jump to the NHL, AHL, ECHL or any other of the various professional hockey leagues around the world. But for a select few, college hockey is merely a steppingstone to the bright lights of the NHL.

In fact, according to our research, 311 players who have seen at least one regular season NHL game in 2017-18 honed their skills in college before making the leap to the professional ranks. That number represents 32 percent of all NHL players from the current season. In 2017-18, 53 former collegiate hockey players have made their NHL debut.

In the NHL, it sure seems some teams are more likely to sign, trade or draft for a college-bred player than others. In fact, 16 NHL teams had 10 or more college-bred players on the ice this season, led by the New Jersey Devils (17), Boston Bruins (16), Buffalo Sabres (16), Minnesota Wild (16) and Pittsburgh Penguins (16).

Naturally, the state of Minnesota is well-represented among the college-to-the-NHL players. Of the 311 players, there are a record 58 native Minnesotans, including 16 who made their NHL debut this season.

A look at the NHL rosters of last 18 seasons also shows that college hockey players are gaining a stronger foothold in the league. According to our research, 210 players who saw at least one regular season NHL game in 1999-2000 played college hockey before making it to the big leagues. In following seasons, that number has continued to grow (see graph) to last season’s high mark of 313, a 49-percent increase from 1999-2000.

The number of colleges providing players to the NHL has similarly grown over the past 18 seasons, from 39 in 1999-2000 to a high of 49 this season.

Along the same lines, the numbers of Minnesotan NHL players who also played college hockey has grown over the last 18 seasons. In 1999-2000, there were 25 college-to-the-NHL Minnesota natives. The last 11 seasons has seen 40 or more.

And the numbers will only continue to grow as over 130 players have signed pro contracts since the conclusion of their 2017-18 college seasons. During the 2017-18 college hockey season, there were nearly 200 players whose rights were owned by an NHL franchise. In addition, the NHL Central Scouting Service’s rankings for the 2018 Entry Draft list 111 current or future college players.

Phil Housley was the rare hockey player to make the quantum leap from high school to the NHL. Countless Canadians take the Major Junior route before making the jump to the pros. European players compete in the numerous leagues throughout the continent in hopes of someday earning a spot on an NHL team. But for 311 NHL players, college was the path to take.

Thanks to College Hockey, Inc. for additional data. 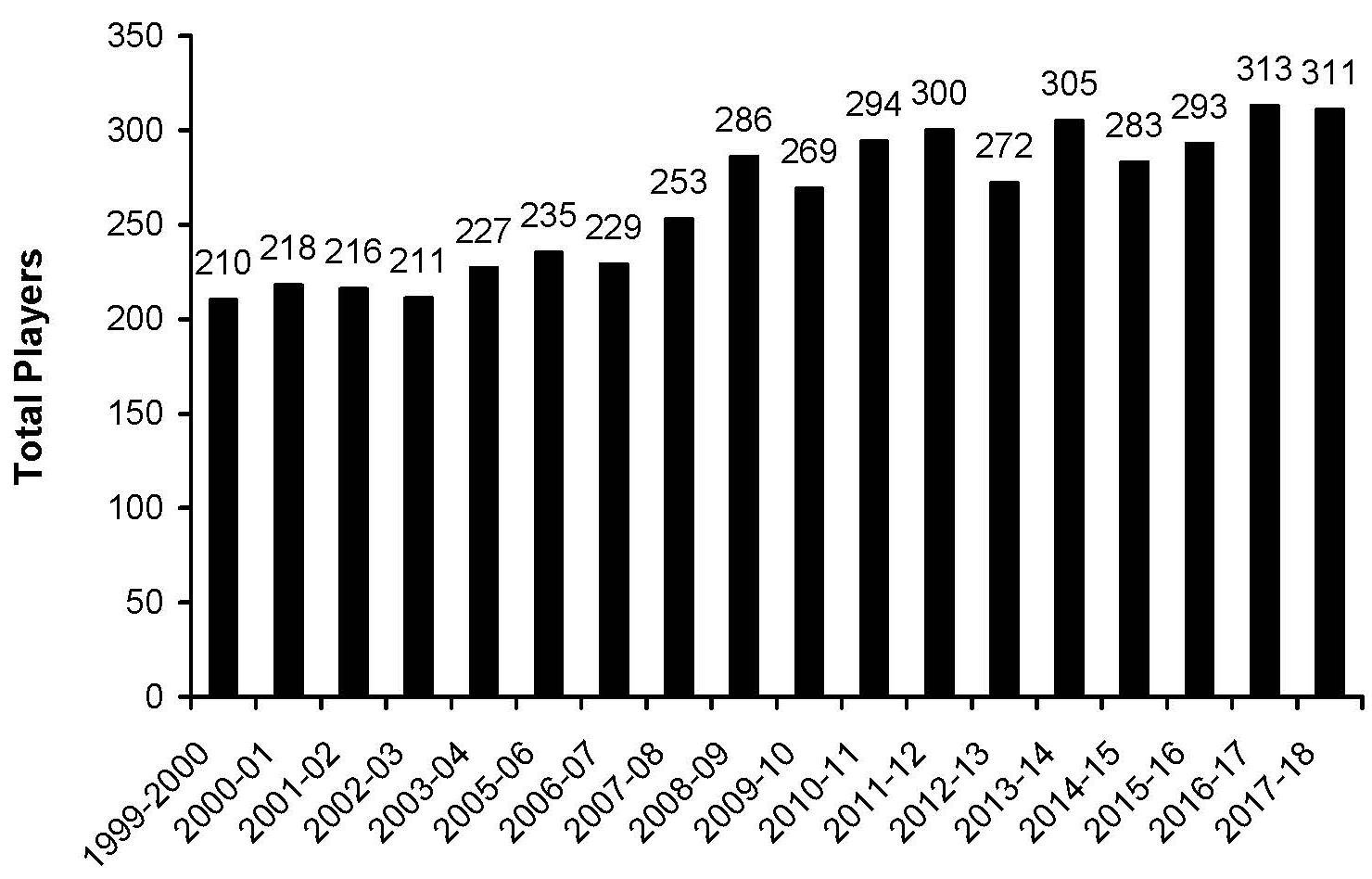 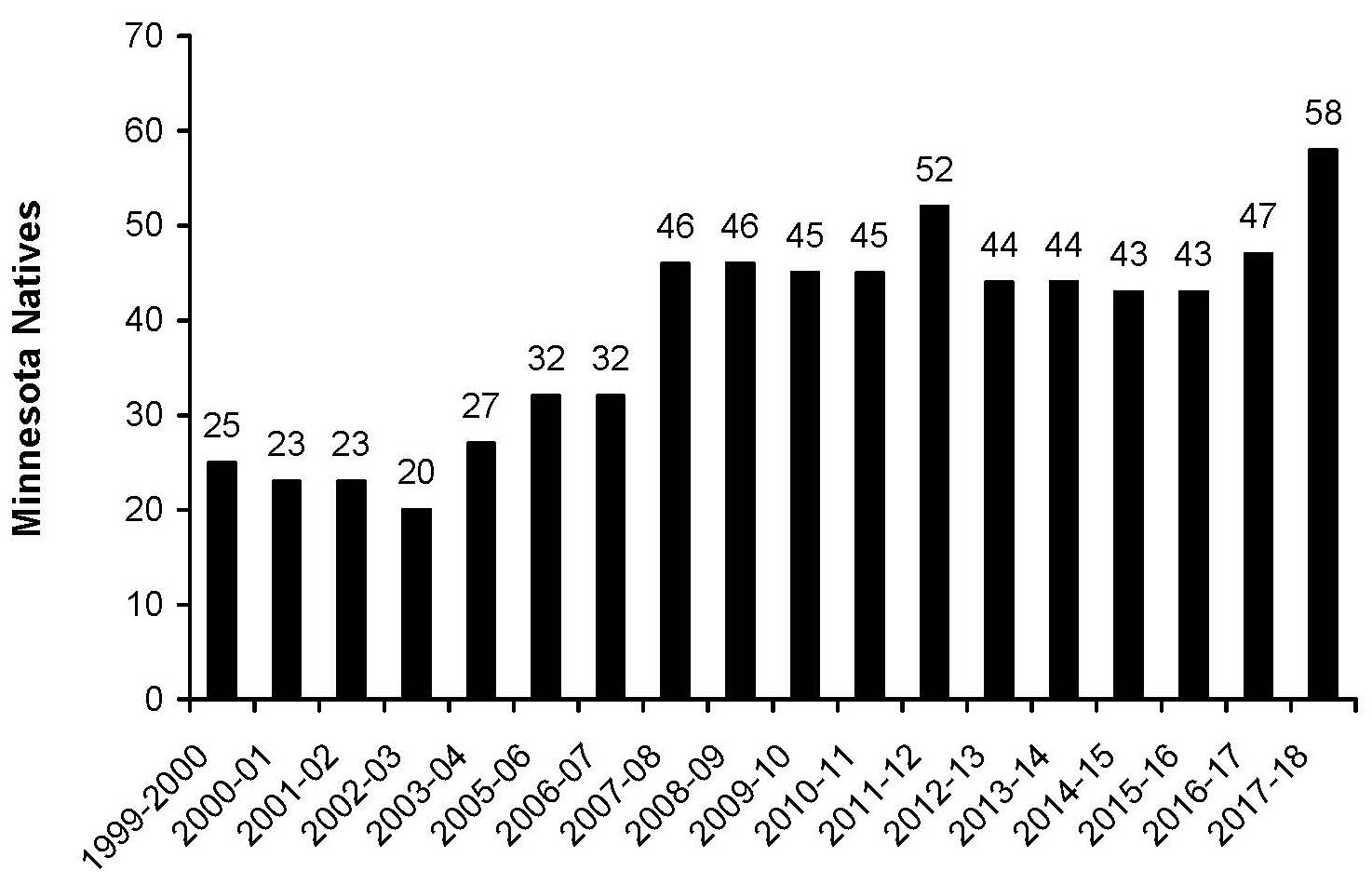