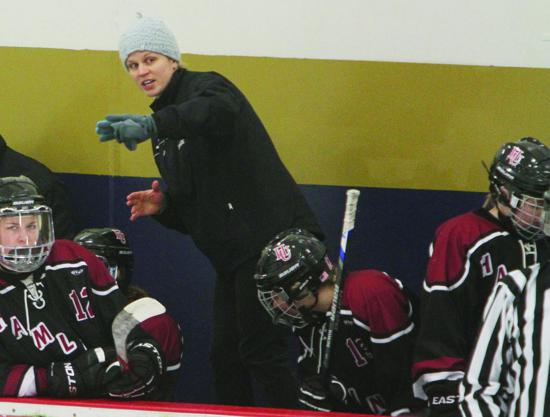 When former Gopher and Olympic gold medal winning hockey star Natalie Darwitz took over the helm of the Hamline women’s hockey program three years ago, her expectations were modest.

“I don’t really know if I had a timeline,” Darwitz told me by phone. “I’m just really competitive. I don’t like to lose, my heart beats a little bit differently and so we just grinded the last two years.”

This year, the grinding paid off. In her third year as head coach and with just her second recruiting class, Darwitz and the Pipers took third place in the NCAA Division III Women’s Hockey Tournament. The year before she began coaching at Hamline, they had just six wins. In her first season, they went 9-13-3. In her second season, they were 12-13-1. This year, they posted an astounding 21-4-3 record, finishing third in the MIAC during the regular season, the best finish in school history and won the MIAC postseason tournament for the first time. The progression his been nothing short of miraculous, but it’s anything but a miracle. It was simply about changing the culture.

“There is only one player from the old coaching staff on our team,” Darwitz says. “We set the bar high and you want to surround yourself with people who want to do the same, and it makes for a good recipe for building up a program.”

Darwitz has succeeded at every level she has played or coached, and there are no challenges that she has backed down from, including this latest. Coaching hockey isn’t easy, and at the Division III level it’s even tougher. Personal relationships with the players are key and recruiting the right players means everything.

“Number one, you have to get the right kids in here that have the same vision (as you),” Darwitz says. “And they are chomping at the bit and salivating to be a part of that. Then from an everyday, process standpoint, we have high standards as a program.”

Her biggest secret to success, however, is really no secret at all: Darwitz cares immensely for her players. One of the biggest challenges in being one of the best in the game is trying to coach others to do it like you did. Very few can play the game of hockey like Darwitz, but she’s not trying to get her players to do that. In fact, she’s less interested in the X’s and O’s, and more interested in making sure her players know that she cares about them, with the idea that the rest will fall into place. So far, for Darwitz and the Pipers, it certainly has.

“I think that is where I have grown as a coach,” Darwitz says. “A few years ago, I thought it was all X’s and O’s, or at least the majority of it, but it’s not. It’s about reaching every individual player and how to talk to them in different ways. I have to talk to my captain in a different way than I talk to one of my freshman players. You have to learn how they tick and what motivates them.”

Darwitz is motivated by winning, success and seeing just how great she can be. So naturally she sees this early success as something to enjoy. But even in the midst of our conversation about how well this year went, there is a thought about more.

That’s just how Darwitz’s mind works. It’s what made her an elite athlete and now an elite coach. One time, one successful season is never enough. There’s always that motivation to make it continue and she sees the culture being changed here.

“I am enjoying the moment, I am definitely proud of the team and the staff and there are a couple of seniors, Sarah Bobrowski and Darby Dodds,” Darwitz says. “We’re lucky to have those two as leaders and they have paved the way for our players.”

Thanks in part to the national third-place finish, Darwitz’s name is going to soon be recognized for more than just playing. The artwork she has painted on Hamline’s blank canvas is sure to get noticed by higher levels of competition. One day, Darwitz admits, she might be interested in that. But for now, her two most important jobs, mother and wife, have to be able to balance with her other true love of hockey.

“I think if you are comfortable in your setting, then you get a little complacent,” Darwitz says. “There is always gonna be that question in my mind: ‘What could I do at the next level?’ Could I do it?’ Everything is about getting better each day and if that happens for me in 10 or 15 years, I’ll take a look at it, but for now this is a good spot for me.”

No one at Hamline will disagree with that, as Darwitz and the Pipers continue to rise to new heights and re-write the school’s record books.