Winner will be announced on Sunday, Feb. 25, at the Ms. Hockey Awards Banquet at the St. Paul RiverCentre. 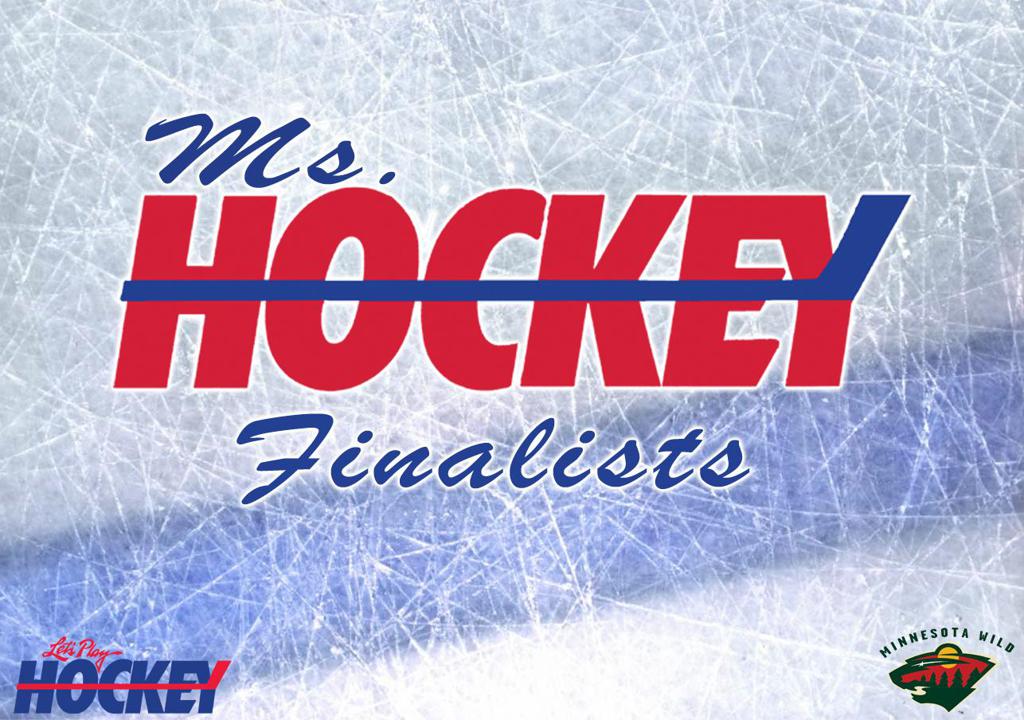 The five finalists for the 23rd annual Ms. Hockey Award are defenseman Madison Bizal of Elk River/Zimmerman and forwards Taylor Heise of Red Wing, Gabbie Hughes and Anneke Linser of Centennial and Emily Oden of Edina.

Each of the finalists have committed to a Division I women’s hockey program with all five players heading to a WCHA school next season.

The five honorees have scored an average of 34 goals and 28 assists this season. The finalists have been bound to the textbooks for the past several years as they check in with a cumulative grade-point average of 3.63.

The Ms. Hockey Award is presented to the top senior girls’ high school hockey player in Minnesota. The winner will be announced at the Ms. Hockey Awards Banquet on Sunday, Feb. 25, at 9:30 a.m., at the RiverCentre in St. Paul.

Alphabetically, here is a look at the five finalists for the 2018 Ms. Hockey Award:

Madison Bizal • Elk River/Zimmerman
One of the state’s elite defensemen, Madison Bizal looks to become the first blueliner to be named Ms. Hockey since 2014 winner Sydney Baldwin of Minnetonka. With 10-13--23 in 26 games this season, Bizal notched over 100 career points during her time with the Elks.

Third on the team in scoring, Bizal posted six multi-point games and was routinely tasked with playing against opposing teams’ best players. Of her 10 goals, six came on the power play and one while shorthanded.

A three-time all-conference honoree and 2017 all-state selection, Bizal was a member of the  gold medal-winning U.S. Women’s National Under-18 Team at the 2018 IIHF World U18 Championship. While Bizal was with Team USA, the Elks went on a six-game losing streak. Following high school, she will continue her hockey career at the Ohio State University.

“Elk River has a long history of success and great hockey players.  Madison Bizal is at the top of this list,” Elk River head coach Dale Sager said. “Madison’s contribution to her team cannot be overlooked as she is one of the premier defensemen in the country that makes players around her better.”

Off the ice, Bizal owns a 3.752 GPA, is a member of the National Honor Society and has volunteered with Buddies, a program to mix mainstream and special education students in after-school activities.

Taylor Heise • Red Wing
Considered one of the top players in the nation in her age group, Taylor Heise has helped the Wingers to the No. 3 ranking in Class A and just one win away from their first state tournament appearance since 2015. Despite missing four games this season, Heise leads Red Wing and ranks second in the state in scoring with totals of 65-27--92 in 22 games.

A two-year team captain, Heise has posted 19 multi-point games and 18 multi-goal games, including 13 hat tricks. She has been held without a goal just once in 22 games this season. Looking to become Red Wing’s first Ms. Hockey winner, Heise is a three-time all-conference pick and a two-time all-state honoree.

Heise was a member of three gold medal-winning U.S. Women’s National Under-18 Team at the 2016, 2017 and 2018 IIHF World U18 Championships. She also trained with the U.S. Women’s National Team prior to the Four Nations Cup. Following high school, Heise will continue her hockey career at the University of Minnesota.

Owner of a 3.957 GPA, Heise has served given her time to a number of organizations, including student council, yearbook and Circle of Friends, a mentorship program with students who have disabilities. In addition, she has lettered with both the Red Wing soccer and track & field teams.

“Taylor is quick to volunteer, humble, and respectful of adults and coaches,” Haley said. “Taylor has done great things in hockey thus far. “However, I think she is capable and will do great things and leave an impressive mark in life.”

Gabbie Hughes • Centennial
One of the top girls’ hockey players in program history, Gabbie Hughes has helped the Cougars to the No. 3 ranking in Class AA with scoring totals of 38-33--71 in 25 games this season. In the regular season, she ranked fourth in the state in points, seventh in assists and eighth in goals, and has tallied at least one point in all but three games this season.

Hughes owns 20 multi-point games and 12 multi-goal games on the year, including four hat tricks. She has posted two four-point games, two five-point games, one six-point game and one seven-point game this season. Hughes has helped Centennial to a 22-3-1 overall record and within one win of qualifying for its first state tournament appearance since 2008.

Hughes was a member of the gold medal-winning U.S. Women’s National Under-18 Team at the 2017 IIHF World U18 Championship. A two-time all-state honoree and Centennial’s all-time leading scorer, Hughes will continue her hockey career at Minnesota Duluth.

“Gabbie is an elite hockey player,” Centennial head coach Kristina King said. “She’s one of those players that wows you every time you see her play. Whether it’s her vision, puck skills, goal-scoring abilities, selflessness, shot, work ethic or overall love to compete, she's an all-around complete player.”

Off the ice, Hughes owns a 3.02 GPA and has volunteered with numerous organizations, including spearheading the team’s annual service project to make blankets for children’s hospital patients.

“Gabbie is a leader not only on and off the ice for hockey, but in school, the community and with her friends and family,” Ling said. “She prides herself in being the hardest worker at all times, no matter what she is doing. The Centennial community associates Gabbie with hockey excellence, hard work, determination and reliability.”

Anneke Linser • Centennial
Like her teammate, Linser is one of the state’s elite forwards and is looking to become Centennial’s first Ms. Hockey Award winner. This season, she owns totals of 26-41--67 in 26 games and ranked second in the state in assists and fifth in points during the regular season.

Linser has scored at least one point in all but three games this season, and owns 18 multi-point and six multi-goal games on the year. A three-time all-conference honoree, 2016-17 all-state selection and 2017-18 team captain, she was a member of the gold medal-winning U.S. Women’s National Under-18 Team at the 2017 IIHF World U18 Championship.

Along with Hughes, Linser is the first Cougar to be named a Ms. Hockey finalist. Her play has helped Centennial to a 22-3-1 record with the team outscoring its opponents 121-39 on the season. Linser will continue her hockey career at Minnesota Duluth.

“As a hockey player, Anneke shows an immense amount of strength and has an ability like no other to see the ice,” King said. “She sees the play developing far before it actually happens, she prefers to be a playmaker and to set her teammates up.  When the time comes for her to shoot, she also has the skills to be a goal scorer."

Along with being an excellent hockey player, Linser is also a top-notch student and multi-sport athlete. She holds a 3.98 GPA and has volunteered over 100 hours of her time to various service projects. Linser also has competed on the Centennial soccer, tennis and lacrosse teams.

“Anneke is a leader on and off the ice,” King said. “She strives to be a positive role model, not only in hockey, but in life. On the bench, in the locker room and away from the rink, Anneke takes pride in leading by example in what is morally and ethically right. She also leads by example with her work ethic and her determination to be successful in everything that she does.”

Emily Oden • Edina
Largely credited as a major reason for the Hornets’ success the past several seasons, Emily Oden is Edina’s third ever Ms. Hockey finalist. This season, Oden owns totals of 30-27--57 in 27 games and has helped the Hornets to the state’s No. 1 ranking in Class AA and within one win of advancing to the program’s fourth straight state tournament.

Oden has scored at least one point in all but five games this season, and owns 15 multi-point and six multi-goal games on the year. A three-time all-conference and 2017 state champion forward, Oden was a member of two gold medal-winning U.S. Women’s National Under-18 Team at the 2016 and 2017 IIHF World U18 Championships. Following high school, she will continue her hockey career at the University of Minnesota.

“Emily has been on the team since she was in eighth grade and has had an impact since that day,” Edina head coach Sami Reber said. “Without a doubt, she is one of the best high school forwards in the state. Her ability and skills are superior to most of those around her. She has the ability to out-skate, out-power and out-shoot anyone she goes up against.”

Off the ice, Oden owns a 3.42 GPA and is a member of Catholic Charities of St. Paul and Minneapolis, and is a co-organizer of the Sam Oden Memorial Triathlon.

“Emily is just an all-around good kid who works her butt off every day to be a better person and hockey player,” Reber said. “You know she cares about her team and her teammates so much because she comes to the rink every day determined to get better and ready to go to battle for them day in and day out.”

In addition to announcing Ms. Hockey, the winner of the 2018 Senior Goalie of the Year Award will be named at the Ms. Hockey Awards Banquet on Sunday, Feb. 25, at the St. Paul RiverCentre. Both awards are sponsored by Let’s Play Hockey, the Minnesota Wild, GoodWood Hockey and OS Hockey.

Additionally, all-state and all-academic awards will be presented by the Minnesota Girls’ Hockey Coaches Association, as well as the coaches of the year, the Brano Stankovsky Award, and the Charlie Stryker and Adrenaline Fundraising Scholarship awards for 2017-18. KARE 11 news anchor Julie Nelson will be the keynote speaker. Tickets for the Ms. Hockey Awards Banquet may be ordered by calling Beth Kurtt at 612-306-1935.