Janine Alder heading back to the Olympics

St. Cloud State will miss their Swiss goalie, but will be in good hands with Emma Polusny backstopping the Huskies 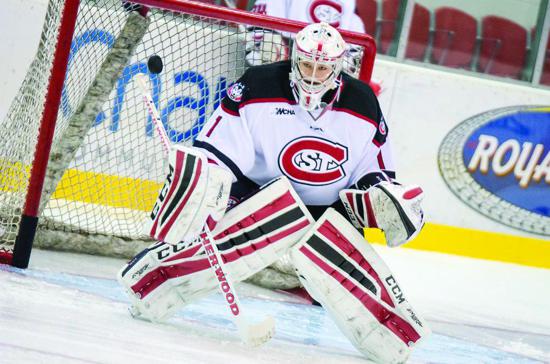 It was an announcement Janine Alder never saw coming. She hoped it would come but hope was all she had. All the St. Cloud State women’s hockey netminder and Zurich, Switzerland native knew was that the 2018 Olympic Games were approaching fast and her phone hadn’t rang yet. What she didn’t know was that the call had actually come, only to her coaching staff. When it was finally announced inside of the Husky locker room that Alder was going to be stopping pucks once again for Team Switzerland in PyeongChang, South Korea, the room went nuts.

“When we told the team at the end of practice, there was a huge cheer and there was a pretty tight hockey hug that happened right after that,” St. Cloud State assistant coach Steve Macdonald said.  “It was great to see everyone excited for her.”

“It was a hard week before that call,” Alder said. “I was always thinking, ‘Did I do that right or did I do that wrong?’ Stuff like that. When the call finally came, I was super happy. A peace came over me knowing I made the right choices. I’m really happy and honored to be a part of the team and hopefully two more to come (Olympics). We’ll see, I’m super old.”

Super old, no, but Alder has been down this road before. Back in 2014, she skated for her country in Sochi, helping Switzerland to a bronze medal. To her, the 2014 experience was much like her freshman season in the WCHA. Alder remembers going through a period of adjustment in both cases.

In Sochi, it was simply adapting to the experience and all of the lights, camera and action that goes along with the Olympics. In St. Cloud last year as a college freshman, Alder recalls adjusting to women’s hockey on the ice and being a college student in America away from it.

But let’s be honest. If the Swiss sensation compares this trip overseas to her rookie campaign as an all-league goaltender (named to 2016-17 WCHA All-Rookie Team) in arguably the toughest conference in women’s college hockey, then Team Switzerland should be in good hands.

“Always as a first-timer, everything is super impressive,” Alder said. “There are so many things going on during those games. As a second-timer, I feel a lot more confident and a lot more comfortable being there. I know what’s going on. I know how to prepare myself so I can stay focused. I always compare it to here. My sophomore year so far has been way more comfortable compared to my first year because I knew what the away rinks looked like, I knew how all of the teams played and stuff like that. I think it’s going to be similar to that. It’s like me being a sophomore in the Olympics.”

One of the first, if not the first, to hug Alder when the announcement was made was fellow standout SCSU goalie Emma Polusny. A Mound Westonka product, Polusny has catapulted onto the WCHA hockey scene faster than one of the slap shots she sees (and often stops) coming from the stick of her opponents. Already with three shutouts under her belt, the freshman backstop is second in the WCHA this year in goals-against average (2.00) and second in save percentage (.939). Alder is sixth in the WCHA in goals-against average (2.29) and third in save percentage (.935). The dynamic duo has posted out-of-this-world numbers this season, including a recent 53-save performance by Alder against No. 1 Wisconsin.

With Alder now on her way to South Korea, the goalie stick will be passed to Polusny and junior Taylor Crosby. Each time international competition kicks into high gear, coaches for hockey programs from across the country at the college and professional levels begin sweating, not knowing if, or who, they are going to lose. While taking Alder out of action for a month will sting, the St. Cloud State coaches will be breathing a sigh of relief. You can do that when you have the luxury of replacing one all-star with another.

“I don’t think you can overstate how important that is and how lucky we are to have Emma to be able to step in and have that role and be able to play and perform at such a high level in this league,” Macdonald said. “With Janine, any tournament she needs to go to, we are going to support her. If she needs to go to some tournaments and miss some games, she needs to do that in order to put herself in a good position to make that Olympic team. Luckily, she made it and we are happy for her.

“To have Emma there is awesome. As a freshman, she is right in it. She wants it, she’s competitive and she wants that opportunity. She is ready. It’s weird to say that as a freshman, but it’s true. It’s a great opportunity for Emma and obviously Janine.”

The same can be said for the entire team. The Huskies have struggled out of the gates, namely when it comes to scoring goals. Currently last in the WCHA in team offense, SCSU has just two players with 10 or more points. However, the youth movement seems to be working. Over the last 12 games, the Huskies are 4-5-3, including two wins over conference rival Minnesota State and near-misses against top-ranked Wisconsin and national power Minnesota. Led by freshman forward Laura Kluge (leads the team in goals scored with six), four of the Huskies’ top five scorers are either sophomores or freshmen.

“It’s very encouraging and very promising,” Macdonald said. “Even this week in practice, we are watching the girls go through the same drills we went through at the beginning of the year and the growth they have shown from the beginning of the year until now has been tremendous. We are maybe the second-youngest team in the country, playing in arguably one of the toughest conferences top to bottom, so it’s definitely encouraging when you have those two goalies and then you also add Taylor (Taylor Crosby) to the mix as well. With that goaltender group and with the young forwards we have, that gives us a great foundation to work with.

“You don’t want to get too far ahead, but you keep adding pieces to the puzzle and keep getting better every day. That’s the big thing we keep on talking about with the girls, just getting better every day and as a staff, year by year, making sure we are taking steps each year to improve the program. You want some more wins, but we believe that is coming, and with our recent performances, we believe that is starting to show.”

Polusny sees it. Over her last eight games, she has allowed just 10 goals. Over Alder’s last five games leading up to her Olympic break, she has allowed only nine goals to go along with an eye-popping 213 saves (.959 save percentage)! Maybe most encouraging for head coach Eric Rud is the fact that during their recent stretch of 12 games since Nov. 22, where they shut out Bemidji State 4-0, St. Cloud State has scored 21 goals. Up to that point, they had scored 15 goals in 14 regular season games.

“This is so much fun to have the opportunity to help your team and play an important role in winning games,” Polusny said. “It’s so much more fun when you are facing a ton of shots and you are playing well. I don’t think hockey is a game where anyone likes sitting around on the ice. I think this season has been so much fun because of that. Both of us have been playing really great hockey this year and it’s really fun to see her have an awesome game and then I have an awesome one the next day or the next weekend. Both of us have experienced pretty decent success and to now see how the team is starting to play in front of us, I’m really excited about the direction we are headed.”

“Emma is adding so much value to our team and especially to my life,” Alder said. “She’s four years younger than me. She came in with such a joy and love for the game, she kind of helped me find that joy again. Over your career, you always try to keep the joy going, but sometimes it starts to feel like hockey is just work every day. Emma comes in and loves to play hockey because she loves the game, and it helped me find my joy again, the joy I started playing the game with and the reason I started to play in the first place.”

A perfect shot of perspective heading into the Olympics where memories are made and dreams come true. If this is a dream, Alder, Polusny and the rest of the Huskies don’t ever want to wake up.