Five members of the Brodzinski family have played or will play men’s hockey for the Huskies. 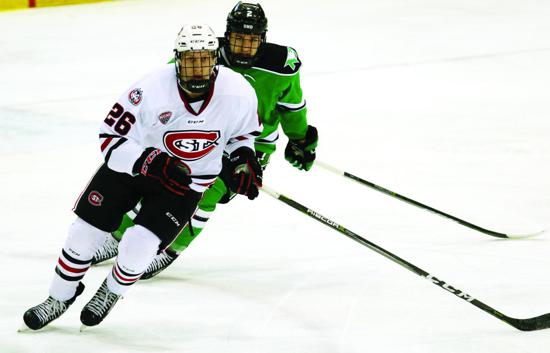 Freshman forward Easton Brodzinski is the fourth member of his family to skate for the St. Cloud State Huskies.

Whenever someone talks to a member of the Brodzinski family – either of the four boys or their father – they are inevitably asked the same question: Are there any more of you?

“We’ve got one younger one,” Easton Brodzinski said with a laugh.

The Brodzinskis have kind of become the first family of St. Cloud State men’s hockey. Of the four brothers, their dad and their uncle, all but one has, is or will be a member of the Huskies’ hockey team. Only Michael went south to be a Golden Gopher at the University of Minnesota.

“He wanted to kind of make his own path,” Easton said of his older brother. “We all supported him 100 percent.”

The third of four boys, Easton, is a freshman at St. Cloud State and is enjoying a very good rookie season. Through 17 games, he’s racked up 10 points and seven goals, was named the NCHC Rookie of the Week in November and is plus-5 on the year. He has helped his team to the No. 2 spot in the USCHO Division I Men’s Poll.

“It’s gone very well,” Easton said. “We’ve had a target on our backs, so we’re just going to keep doing what we have to do and pushing forward.”

Brodzinski didn’t push forward to St. Cloud State by chance. Despite the fact that his father and two other brothers attended the school, his love for and dedication to the Huskies came from an unlikely source: his grandmother.

“She loves this place,” Brodzinski said with an audible smile. “This (the Herb Brooks National Hockey Center) is like her second home, so it’s nice to be back and play there for her.”

Easton’s grandmother, Mary Carole, passed away two years ago. He still speaks of her in the present tense because he insists she’s still with him every game in spirit. Her greatest love was watching her sons and her grandkids play there. Even though she occasionally had to make the trek down south to Mariucci Arena to watch Michael, the Herb Brooks National Hockey Center was her favorite place to be, watching her family suit up for the Huskies.

“Two of her kids played there, my dad and my uncle Steve,” Easton said. “She always kept up with the team even before Jonny was there. She just fell in love with the place right away. It’s just sort of a family history we’ve got there.”

It’s a family that has long made an impact on the program, both on the ice and off of it.

“I’m pretty sure everyone could hear her scream whenever Jonny stepped on the ice,” Easton said with a laugh. “She was very well thought of in that rink.”

As are all the Brodzinskis that have played in St. Cloud. The four brothers talk often despite the fact they are spread out all over the country with Jonny playing for the Los Angeles Kings, Michael playing for San Jose of the AHL, Easton at SCSU and Bryce at Blaine High School. Most conversations involve very little hockey, of course, as they mainly meet up and talk trash online over video games.

“It’s mainly about Xbox,” Easton said. “That’s mainly our way of communication. When we do talk, we don’t usually talk too much hockey. We tend to let our dad do that. Whenever we do talk, we just relax, hang back and talk about each other’s day.”

As children, however, hockey was their life and their common bond. Often, they were playmates on the pond and often it was against each other. It’s a big reason for the family’s success on the ice. When you’re competing against three others who are Division I college prospects, some of whom would turn into professional hockey players, you tend to rise to the competition and become one of the best yourself. It’s a special advantage of being one of the younger brothers.

It all explains the family’s success and why St. Cloud State has readily recruited the Brodzinskis. Even the youngest son of the family, Bryce, is set to be a Husky soon as well. He committed at the age of 16 without so much as an official visit to the school. But let’s be honest, he really didn’t need to. While Herb Brooks’ name may be on the outside of the arena, nearly everything inside is pure Brodzinski, and that’s just the way they like it.