Former Benilde-St. Margaret’s and University of Wisconsin forward is playing his rookie pro season in the ECHL 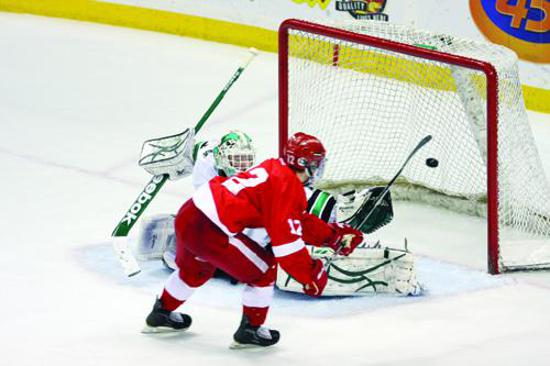 “I mean, it was pretty cool, “Besse said by phone. “But I don’t really talk about it too much.”

He scored a record five goals in the Class AA championship game in 2012, including three shorthanded goals in the Red Knights’ 5-1 win over Hill-Murray to capture the state title.

“It’s nice kind of around this time when a bunch of my buddies from that team are back home,” Besse said. “We’re together and, you know, we reminisce about it. The good old days. It’s fun to talk about it once in a while, but it’s weird to think about it that it was, what, six years ago?”

They say time flies when you’re having fun and Besse has had a blast since leaving high school. He won Minnesota’s Mr. Hockey award in 2013, was drafted by the NHL’s Anaheim Ducks and played four successful seasons at Wisconsin, where he was a captain his senior year and had a chance to play for former NHL player Tony Granato.

Since leaving Wisconsin last spring, Besse’s hockey career has come back to earth a bit. He went to San Diego for a preseason camp with Anaheim’s AHL team. But the franchise decided not to offer him a contract. So he ended up signing with the Norfolk Admirals of the ECHL and though he loves and is grateful for his time with the Admirals, there still exists a small disappointment of not getting that contract from the team that drafted him.

“Obviously you want to move up to the highest league you can,” Besse said. “And obviously playing in the NHL is the ultimate goal, but everyone has their own individual path and this is where mine has taken me. So, yeah, I guess you could say there is a little adversity. But you just have to take the opportunity and make the best of it. If you can do that, then you should be in pretty good shape going forward.”

Besse has definitely made the most of his first couple of months in the ECHL. He leads the Admirals in scoring  and his 27 points (14 goals and 15 assists as of Jan. 10) make him the third-highest scoring rookie in the league this year, and last week, he was selected as a 2018 ECHL All-Star. It’s a start to his pro career that might have even caught him by surprise.

“I guess I didn’t really know what to expect,” Besse said. “You come into your first professional season and you hope you don’t screw up too badly and tick some of the older guys off. But I am confident in my abilities as a player, so I can’t say I’m surprised in how I am doing so far. Hopefully I can keep it up throughout the rest of the year.”

He once again has an experienced leader to work under as well in Norfolk head coach Robbie Ftorek. He was a member of the 1972 U.S. Olympic Hockey Team and a longtime professional player at many different levels, including appearing in 77 NHL games. But Ftorek has made an even bigger mark in the coaching world. He’s been behind the bench at all levels in different capacities since 1985. And like Granato, he’s been able to impart plenty of wisdom on Besse.

“He’s unbelievable, I love him,” Besse said of Ftorek. “Robbie has played and coached at all levels, with some of the best players in the world. From the stuff he has been in, he can help you as a player. It’s really helped me this first half of the season.”

While Besse doesn’t spend much time thinking about when he’ll get a chance to prove he can make it at the higher levels, when you are an elite level athlete you always strive to be the best. Besse is no different. Someday he hopes to don an NHL jersey, but for now, he’s quite satisfied pulling on Norfolks’ sweater every night.

For Besse, forward thinking will be the key to his future success, despite the fact that his past has been so full of it. But if he wants that to continue, living in the now is his only choice.