Now is not the time to fire Chuck Fletcher 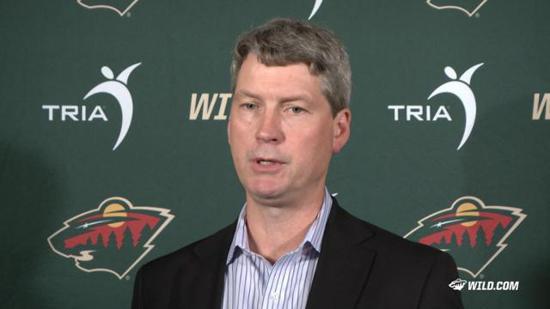 Through the wonders of social media, I’ve recently received a lot of comments from angry Minnesota Wild fans asking for the team to fire general manager Chuck Fletcher. While I do believe there is some blame to be passed his way, I have answered every question, comment and tweet the same way: How will that help the team now?

As of Jan. 4, the Wild are in ninth place in the Western Conference with nearly half a season to go. They have floated in and out of the final wild card spot a few times and still show flashes of hope of being a playoff-caliber team. For those reasons and more, firing a GM will NOT help get this team to where they want to be and where fans want them to be.

First, let’s start with the things that I feel have been mistakes for Fletcher. At the top of that list is contracts. It’s not necessarily who has those contracts, but rather the way they were structured. For the last few seasons the Wild have been at or near the top of the league in the number of players with no-trade or no-movement clauses in their contract. Players/agents often seek these so they can have some guarantee that they’ll stay in one place for a while and earn the totality of their contract.

The problem is that Fletcher and the Wild have given these out a lot. Two years ago, they had six players with no-trade, no-move clauses – including two players who woefully underperformed. This year they have five – which includes Zach Parise who just played his first game of the year after having back surgery. Compare that with the best team in the NHL right now, Tampa Bay, who has only four, and only one of those guys make more than $4.5 million. Of the Wild’s five players with no-trade/movement clauses, only one player makes LESS than $4.5 million. All of this leaves the Wild with much less flexibility to move players that are underperforming or to be able to afford a high value free agent. (All contract information courtesy of Spotrac.com)

Then there are the bad free agent moves in the offseason – and there have been plenty: Dany Heatly, Devin Setoguchi, Guillaume Latendresse and Thomas Vanek, are just a few of the guys that have been acquired by this team either through trade or free agency. It’s safe to say that those moves did not work out.

Heatly’s first season was good, but he fell off the map after that. The same can be said of Setoguchi and Latendresse. Vanek was a reach selection gone bad. At the age of 31, the Wild gave Vanek a two-year, $7.5 million contract. He scored 39 goals over the course of two up-and-down seasons. While he was somewhat of a playmaker, he never quite lived up to his reputation as a goal scorer and was eventually bought out. Again, those moves left the Wild with less cap space to make more moves.

This offseason they had to trade away Jason Pominville and Marco Scandella to make some space. While Pominville’s departure was not a great loss to this team, I do believe the Wild would love to have Scandella back in the defensive core. Instead, they’ve had to plug in young guys like Mike Reilly and Gustav Olofsson who have not made the same impact that Scandella would have – who now has 10 assists through 39 games in Buffalo.

With all that said, there is one big reason why I don’t think all of this season’s disappointment is on Fletcher: injuries – of which the Wild have had plenty. Of last year’s top eight scorers, four have missed time with injury this season. Parise has played in one game this year after back surgery, Charlie Coyle missed 16 games with a broken leg, Nino Niederreiter has missed 11 games with multiple injuries and Mikael Granlund missed five games with a lower body injury. If you add in the departure of Pominville, who had 47 points a year ago, that leaves you with just four of your top eight scorers back in the lineup to start the season. Instead, the Wild had to piecemeal a lineup full of younger, less skilled players and elevate guys to lines that they weren’t ready to be on.

So what exactly does all of this mean? To me it says that while Fletcher deserves his share of blame for the rough start to this season, it’s not all on him. Players come and go – on every team – but the injuries to this year’s team, coupled with a pair of key players lost in the expansion draft, made this Wild lineup a lot different for the first half of the 2017-18 campaign.

Now that all of the players are healthy, it will be interesting to see how they respond. However, firing a GM at this point in the year will do nothing to improve this team’s chances of making the playoffs. Should they miss the postseason, I can certainly see the reason for a change. But until that time, I think it will do nothing but show the rest of the league that this franchise is throwing up the white flag on the 2017-18 season.