Playing and practicing at a good pace and with great intensity is generally what separates good from bad teams. 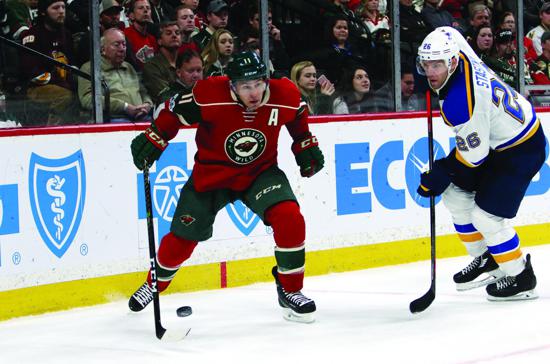 Minnesota Wild forward Zach Parise is one of the most intense players in the NHL with and without the puck.

Over the past 31 years, I have written several times about the importance of team/individual pace and intensity. I have taken the time to study and consider most of the important aspects of the game, and particularly chose items that have the most impact on overall performance of any team. While it certainly is important that a good team has sound systems, including special teams, basic skating and other skills, there is one overriding item: pace and intensity. They go together as a team.

Playing and practicing at a very good pace and with great intensity is generally what separates good teams from bad ones at any given level, assuming that their skill levels are reasonably close together. In other words, some teams just play “faster” than others. That means that they forecheck and backcheck harder, they get to loose pucks quicker and they transition (turn the puck around) quicker. A friend of mine, the late Bob O’Connor, who coached at the high school level but also coached at the national and pro levels, had created a saying (from another context) that gets across this meaning of pace and intensity. He said that “speed kills.” What he meant is that as the pace and intensity of the game picks up, it is too much for some players or even whole teams.

Pace and intensity are developed in practice. This is not necessarily an easy task, especially for teams where very little competition for positions exists. It is a matter of forcing most drills to be performed at uncomfortably fast speeds. This was, of course, the basis of my summer/fall Russo Hockey Training Programs. It created great results in that players learned in the same way speed reading is taught.  As they skate and perform at these high levels,then back down just a little, everything becomes easier to do. Using an analogy with auto racing, drivers that commonly race at 150-200 mph find 125 mph fairly slow and easy to handle. To those drivers that have never driven 125 mph before, the speed would be paralyzing – for awhile, until they got used to it

Most teams at all levels practice at what I would call a lazy pace. They are therefore learning to play games at the same lazy pace. This is not to say that every drill in practice has to be at high intensity. When new skills are being learned, especially at the lower age groups, they must be taken slowly for awhile to allow the body and brain to pick up the right techniques. By the high level PeeWee, then Bantam and high school levels, however, many to most of practice drills should be very fast-paced. That means, for example, that  in 1-on-1’s, 2-on-2’s and 3-on-2’s, the forwards must attack the defensemen – not only to develop their own skills and pace, but also to allow the defensemen to learn how to handle things better.

Many coaches allow their (mature) teams to lollygag through most of every practice, then do leg-deadening conditioning drills the last 10 or 15 minutes. There are times when conditioning of the right variety is in order.  However, practices run with mostly high-paced drills have conditioning built into them. I have spent very little time with my teams with what would be the classic end-of-practice conditioning, but the teams were generally well-conditioned and could play at a fast pace throughout their games.

When coaches first attempt to increase the pace of a team, it can be a little stressful. I say stressful because it is necessary to push the players individually and the team as a whole. A few players will naturally want to and be willing to play with great intensity. These should be the captains, the leaders.

As players progress up the ranks to older and better, they will find more players on each team that are “hard-tryers” – that is, pace and intensity. Players that will not be hard-tryers end up on the lower teams and lower lines. Coaches should take the time early in the season to discuss this concept with the team – and explain that not trying as hard as others will put them on a lower line or lower defense pair. Hard-trying teams (and players), even with less skills, will often beat more skilled teams. The magic is a skilled team full of hard-tryers.

It is really up to the coaches to help players be intense. As said above, teams play the way they practice. In practice, if players are taught to push hard when skating, shooting, backchecking, pursuing the puck, etc., then they will continue to do it in games.

Ask youngsters to watch Wild games and pick out the most intense players with and without the puck. They will choose Zach Parise, Mikael Granlund, Tyler Ennis – the guys who succeed with intensity – and change the whole team with them.

John Russo’s new chapterized book, “The Best of 26 Years of John Russo’s Coaches Corner,” has been described as a “must read” for all youth coaches. Go to russocoachescorner.com for information and ordering.