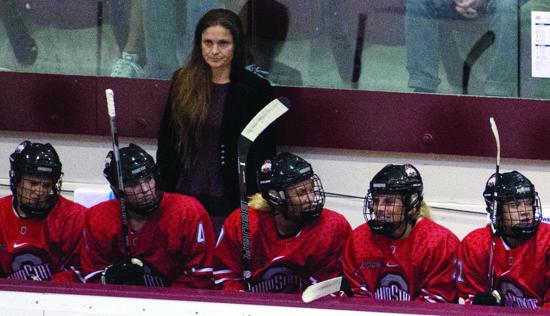 Nadine Muzerall is in her second season as head coach of the Ohio State women’s hockey team.

When asked why they chose to pursue a coaching career, many of the coaches spoke of wanting to give back to the sport they loved and a desire to mentor the next generation of female players on and off the ice. For Stone, coaching was “the family business,” noting that she was the youngest of four coaches. Stone described coaching as not just a career, but more of “a lifestyle.”

Rivard also had a family history of hockey, noting that it was her passion for the game that led her to coach. “My whole family played,” she said. “In the 1930s, even my grandmother played on a women’s team in Canada. The teams took trains from game to game.”

Muzerall, a top player at the University of Minnesota also noted her love of the game, as well as wanting to “give back” to the sport she loved. On a more practical level, she noted, “If I’m going to be away from my family so much, it had better be something I love to do.”

Being a female in the coaching ranks presents many challenges. Several of the coaches with whom we spoke noted that pay equity and opportunity do not keep pace with their male colleagues. Further, the need to earn respect from players and parents regardless of previous playing and coaching credentials was mentioned as another challenge. Time away from family is also a concern. For Slominski, “coaching youth hockey and my own kids’ teams was a way to stay in coaching while spending time with family.”

Murray had a challenge of yet another type: understanding the culture of her players. She stated that when she first began with the team, she was surprised that the women would not ask questions during explanation of drills. She soon learned that “they were not asking questions because in Korean culture it would mean that I was not doing my job properly and they did not want it to reflect poorly on me.” She said that she informed them she would rather they ask questions “than go out and mess up my drills. Now I cannot get them to stop asking questions.”

All coaches agreed that the joys of coaching girls and women are varied and many. Crowley stated that “seeing players love and enjoy what they do is what makes me proud as a coach.” Watching the “girls grow as leaders, develop as strong women, become better team players and watching them advocate for themselves is a joy” for Engelhardt.  Stone enjoys “mentoring girls and women to develop as players and people. Encouraging them to recognize they are capable of much more than they think they are.” Muzerall summed up the joys of coaching in three words: “relationships, hands down.”

The coaches had several recommendations for those young girls who dream of being a head hockey coach. Get involved behind the scenes of a team. Hand out water bottles and towels. Watch what the coaches do – how they communicate with their players and teach hockey and leadership skills. Accept little to no pay and do not be afraid to network with the people you meet. Surround yourself with positive, upbeat youth hockey coaches. Take advantage of every opportunity offered to you.