The battle of the game 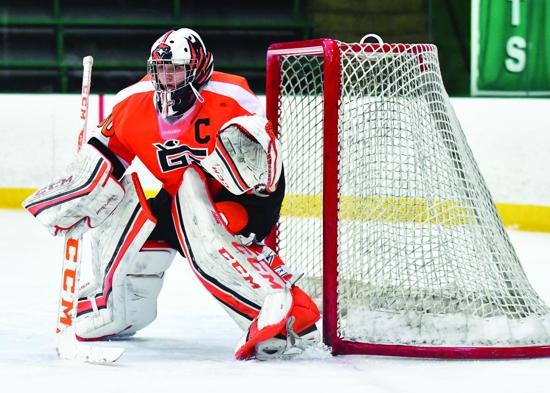 Happy December to all! It was my intent to discuss consistency in this article, but I was witness to something over the weekend that I had to write about.

As I’ve mentioned, I’ve seen a lot of hockey games, and as much I generally go to focus on one of the goaltenders playing, I also watch the other to see what teaching might be taken away to help me coach, and goalies learn and develop.

As my team, Benilde-St. Margaret’s, settled into the IRA Civic Center in Grand Rapids, Minn. – one of the most historic buildings in the state – to take on the reigning state champs, the Thunderhawks, I didn’t really know what to expect. It’s early, they’re the champs, and we were coming off a rough one the night before. This could go really well, or really not-so-well. Within the first 90 seconds, I knew this was going to be interesting – we had five shots on goal and the puck hadn’t left their zone. The math in my head flashed to the equation of a 50-plus shot game coming. Well, I was wrong … the total ended up 63.

This isn’t about how we ended up dominating, or the win that we absolutely needed, but it’s about how their goalie, Gabe Holum played. I wish every goalie in the state could have been there to see his performance. This kid put on a show, and as much as it wasn’t surprising to see him battle, it was that he did it for all three periods. This brings me to a few points Gabe highlighted for all goalies to learn from.

1. Battle. I’ve mentioned this before, but battle comes down to how bad you want it. Are you willing to get at least a piece of the puck while on your back, facing the wrong direction? I think Dominik Hasek was the best at this. That guy never lost sight of the puck, nor was he out of position so much that he couldn’t still make the save.

There are a number of elements of goaltending that have been lost over the past 5-7 years. Sadly, I see all too often a goalie who doesn’t battle, or maybe it’s just that they don’t understand battle.

Not only is battle a mindset, but it’s a game changer. Gabe gave his time a heartbeat that day. Did I mention it was a close game until the third? For all intents and purposes, this should have been a 10-runner, but he took the team on his back and literally went to battle for them.

It’s easy to give up and roll over, but I think he liked the action. I think he was most likely having fun, although he may not agree with me. I could tell he enjoyed stoning shooters all day long. I would estimate he stopped 8-10 normally tap-in goals.

There was a point in the second period when it took all he had to get back up after a stoppage. But you know what? He did! I kept thinking; “Where did he come from?”and “How did he get there?” It was flat-out amazing!

I teach goalies all the way down to the Squirt level what battle means, and I constantly remind older goalies that that’s your job – well, stopping the puck is your job, but battle separates you from all others!

2. Creativity. Remember painting by numbers? It was a simple exercise, but it’s real intent was to see who “broke the rules,” or took it to another level and didn’t just paint the circle the color you were told to.

A lot of times, goalies can get stuck in the “paint by number” game as well. They can move from X to X with no pressure, but when the pressure is turned up, they sag back in their net and become a robot. Now, if you’re 6-foot-6, you can get away with some of this, but in the end you still need to employ some athleticism and creativity.

By creative, I mean finding a way to get there, fight off shots, use your stick to break up plays, a desperation dive, play the puck and ultimately … stop the puck! Don’t just be a robot and move from X to X expecting the puck to hit you. This all can be developed in practice on a daily basis.

Yes, movement drills are a very important piece of any goalie’s toolbox, but you will find larger gains in your development through the tracking and game situational drills. I know you all dislike the dreaded odd-man rush drills, but if run correctly (coaches, no ticky-tack passes in front of your goalie), these drills are one of the best ways for you to conquer adversity and build your game battle. Don’t complain about them, grit your teeth and battle, find ways to make saves in situations you aren’t expected to, get CREATIVE!

Yes, take the shooter, but if there is a pass made to the slot, go for it, for heaven’s sake! Don’t give up on it, don’t take every other shot off – go for every single one and you might be surprised how much your toolbox grows. Mr. Holum could easily have given up on Saturday, but he didn’t, and I would guess he is the same way in practice.

3. Never Ever Quit. Speaking of not giving up, don’t! Many of you reading this have a lot of hockey left in you. Dare I remind you to chase your dream, whatever it may be. Some of you will reach those dreams and part of my motivation to coach goalies is to help you all get there. But also know: The deeper you dig, the better off you will be in everything you do in life. Believe it or not, this ends for all of you at some point. Until then, give it your all and “Crave the Result too Intensely that the Work is Irrelevant.”

By the way, on that 63-shot day, Mr. Holum only gave up five. As a coach, we always like to see .900-plus save percentage. Anything more is only adding to the confidence in your team and the chance of winning. They didn’t win, but he ended up at a .921 save percentage! The poor kid was so sweaty at the end that he had to take a couple of time outs to wipe sweat out of his eyes as his contacts were burning. He battled so hard, he could hardly see … literally!

In closing, remember you have chosen one of, if not the, toughest position in all of sports. How many people do you know would stand in front of a one-inch thick, three-inch round piece of frozen rubber being slung at you off slingshots made from engineered pieces of composite! Mr. Holum serves as an inspiration to the way goalie should be played. Thank you Gabe for that performance!