Bowling Green senior forward Mitch McLain has embraced his leadership role with the Falcons this season. 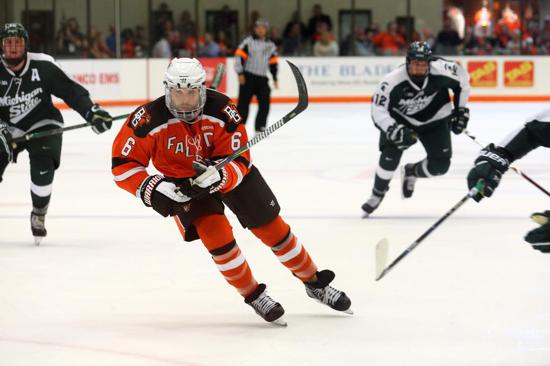 Sometimes everything just falls into place.

Mitch McLain often looks back at his journey from time to time and shrugs his shoulders, pleasantly surprised with the way the puck has bounced and extremely content when where it has finally came to rest.

Bowling Green head coach Chris Bergeron can say the same thing. After losing several players off of last year’s squad, both through graduation and professional contacts, the veteran coach was biting his fingernails at the start of the 2017-18 season. Gone was over 100 points of offense from a season ago and skating onto campus to try and replace that production was a talented, but unproven, group of freshmen skaters from across North America.

When developing a plan on how to make the transition smoother and quicker, Bergeron turned to his small core of returning seniors. One of those seniors eager to help was McLain, a senior forward from Baxter, Minn. Coming off a junior season where he was named to the All-WCHA First Team, McLain knew what it took to succeed in the WCHA. He also knew what it took to be a leader. Leading is something he’s always known how to do.

“Even since high school hockey and going into juniors – I was a captain at Langley (BCHL) – I’ve always just wanted to embrace being a team guy, and being a leader is kind of a natural thing,” McLain said. “When I arrived at Bowling Green, my expectations were I wanted to be a captain here and I wanted to be a leader where I was impacting other guys and helping other guys succeed or giving advice to them so they would have an easier time or path that I had. That’s always something that has motivated me. Playing college hockey, hanging out with your best friends every day is enjoyable. I like being a part of that. When you want to have that responsibility and you get that chance, you want to make good and you don’t want to leave a bad impression.”

“Mitchell is somebody who has contributed since the day he got here.” Bergeron said. “He came in with some expectations. We were told coming out of juniors that he was a really good captain and we were excited about his future when it came to leadership. He’s an inclusive leader. He is a guy who says let’s go do this together, whatever that may be and he’s a hard worker. He’s a guy that brings it every day and tries as hard as he can which is something people can follow. He’s been successful at it.

And start they did. Now three months later, the Falcons have proven to be one of the most surprising teams in the country skating to an overall record of 6-5-4 overall and 5-2-3 in the WCHA. Currently tied for second in the conference, it’s not so much the Falcons’ record that has surprised hockey fans, but rather how quickly they have moved on from last year; and how they have done it. Offensively, those freshmen have been dynamite, scoring early and often. On defense, thanks to a freshman and sophomore goaltender, the Falcons rank second in the conference in team defense. It seems that every weekend Bowling Green’s mixture of returning firepower combined with incoming talent has led to a winning formula. Already four separate players have reached the 10-point plateau. Right behind those four is McLain (5-2--7) who for right now anyway, is putting just as much emphasis on scoring as he is in leading.

“It’s always a concern,” McLain said. “You lose a bunch of forwards and then you lose a couple D-men who contributed a lot on the back end. You know you are going to go through growing pains, and as an older guy you put that pressure on yourself to carry that extra weight a little bit. You come into the season and you want to make an impact and you want to contribute points-wise, but you have to remember that our systems go a certain way. You might have some new players, but everyone else coming back is a year older, too. I think it has helped that the freshmen have been contributing, and it’s been a little bit of a surprise when you look at the results and the success we have had, but there is also room for improvement. We always want to be better. It’s been good and we are going to keep rolling with it.”

“We have some goal scorers like Cameron Wright and then we have some speed guys,” said freshman goaltender Eric Dop. “Most of it I think comes off our captain Mitch McLain. He really leads the forwards. We have a really talented group and it helps me feel more comfortable when I’m between the pipes, that’s for sure. We went on a stretch there where we weren’t scoring too many goals, but I think we are back now.”

“Since day one, he took the freshmen under his wings, especially the forwards, and he’s allowed us to grow and had given us a ton of advice,” said Wright who leads the WCHA in freshmen scoring with five goals and 10 assists. “He’s done a lot for us and I think it shows with how well we have been playing and now with how well he’s been playing. All of the upperclassmen have helped us tremendously. They bring so much leadership and so much advice. It makes us comfortable and confident to go out there and make plays and not be too nervous or hesitant.”

McLain knows what he’s talking about when it comes to offering advice on scoring. After scoring 145 points in his high school in three seasons playing for Brainerd (including 80 goals), he moved to the BCHL and played two seasons with Langley. During his time there, he notched 38 goals and 54 assists. It was right before his second season with Langley when he decided to take his talents to Bowling Green, Ohio. When you think about it, the decision to play for the Falcons wasn’t much of a shock to those who followed the program. Fellow Brainerd alum Matt Pohlkamp was already on the roster. In addition, former Brainerd coach Ty Eigner was an assistant under Bergeron. The familiarity of the program, paired with the opportunity McLain was going to get, made it an easy choice.

“Everything fit my game, the way we play. that style of going hard to the net,” McLain said. “I got an opportunity to play on penalty kill and power play and I got a lot of ice time as a freshman. When you get points and you are confident, good things are going to happen. I had some good seniors to look up to when I first started out and the coaching staff really supported me and what my game was and how it fit into the system. It was just a good fit. I think when you are comfortable it makes it easier to play.”

No one knew at the time just what kind of impact that decision was going to have on the future of Bowling Green hockey – not just on the ice, but away from it as well.

McLain made his presence known immediately. His freshman year, McLain scored 10 goals and added 10 assists, good enough for second on the team in scoring among freshmen and fifth in rookie scoring in the WCHA. His sophomore season was more of the same on the ice. However, he also started to develop an identity away from the rink. That season McLain was named to the All-WCHA Academic Team.

Last season, McLain’s coming out party continued with an All-WCHA First Team selection, scoring 33 points in 40 games. For his efforts, he was named WCHA Player of the Week three times and WCHA Player of the Month twice. Away from the rink McLain was again named to the WCHA All-Academic Team and was named a WCHA Scholar-Athlete while also continuing his work with the local Special Olympics program in Bowling Green.

Now a senior, the Falcons’ 2017-18 team captain was recently nominated for the Senior CLASS Award in college hockey along with 19 others. The award (Celebrating Loyalty and Achievement for Staying in School) emphasizes community, classroom, character and competition. No wonder Bergeron paired McLain with his incoming freshmen the second they stepped on campus. McLain has turned into the very definition of Bowling Green hockey and what Bergeron wants his program to be.

“I’ve been in college coaching for 18 years; it’s hard for me to admit that, but what you do is see these kids come in as freshmen and then watch what they do with that opportunity over the next four of five years,” Bergeron said. “You’ve got some guys who really wrap their arms around it and guys who probably look back and wish they would have done some more and have some regret. Mitchell McLain is a kid where there is no regret there. He volunteers his time; he wants to be a teacher when his hockey career eventually ends. This isn’t about hockey. He’s a pretty impressive kid and that’s what is in his heart to do; he wants to give back, he wants to make an impact in people’s lives.

“He’s made an impact the whole time he’s been here. He embodies what college hockey is all about. There are kids who come and play a couple years and they go onto the NHL and make a bunch of money and that’s great, but this is a kid who has made an impact. He’s made an impact both on and off the ice and he’s taken advantage of an opportunity. That makes you sit back and smile because that’s what the job is about for college coaches, especially in our sport – watching these young guys take advantage of an opportunity and watch them become what they are supposed to become in the world. Leaders, strong members of society because of the way they are wired. Mitchell embodies all of that.”

When McLain was still roaming the rinks of Brainerd as a youngster, who knew that the then-Warrior head coach Ty Eigner would one day be inviting him to play for Bowling Green?  On August 27, 2013, when McLain verbally committed to play for the Falcons, who knew what type of success that decision would bring to the program? When current Bowling Green freshmen skated into campus this past August, who knew the type impact McLain and his fellow seniors would have on the Falcons’ rookie class? Who knew? As Bergeron states time and time again, it all boils down to opportunity.

When summing up Mitch McLain’s career to this point, what else is there to say?