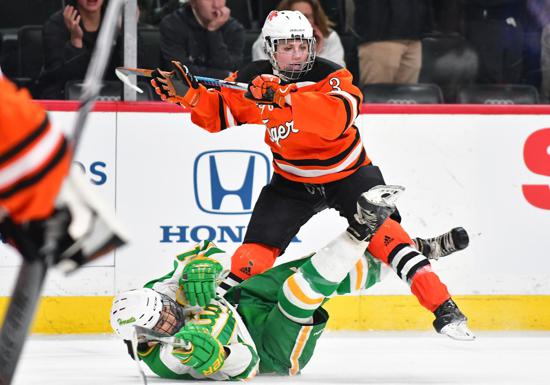 At the university level, female hockey players suffer one concussion for every 1,000 “exposures” to the game – with each practice and game counting as one exposure. On a team of 20 players, that means one concussion every 50 exposures.  With three concussions in my four years at the university,  I represented my team well in this area.

Although statistics on younger players are harder to come by, I would guess that their concussion rate would be just as high  (and maybe even higher) than with the women. Girls are having more exposures than ever to the sport – they compete on school teams, club teams, travel teams, Olympic development teams and weekend tournament teams. Girls’ hockey players are playing just as much as the boys – but are getting hurt twice as often.

One injury researcher said, “If the numbers in women’s hockey are even close to correct, they should just stop playing until they figure out how to lower them.” I definitely wouldn’t go that far, but we have to find a way to prevent these potentially devastating injuries from happening.

So what’s the solution? Some companies have come out with new “concussion-proof” helmets – although the research doesn’t fully support their claims. Some people believe that mouthguards will solve the problem, but again, the research doesn’t support the claim that mouthguards help to prevent concussions. I believe there are two critical things that girls’ hockey players and coaches must actively do to prevent concussions:

1. Girls have to be better prepared physically. A lack of strength and conditioning is a big reason for the alarmingly high incidence of concussions in girls’ hockey.  The stronger a player is, the better she will be able to hold her ground when she is hit unexpectedly (which is how a large number of concussions happen in girls’ hockey).  By building better core stability, balance and overall strength, players are better able to control their bodies in space and withstand the force of impact.

Another important prevention strategy is making sure that players warm up prior to hitting the ice.  A proper 10 minute off-ice warm-up will ensure that a player’s mind and muscles are ready for the intensity of the on-ice session – and will go a long way towards preventing all injuries (not just concussions).

2. Girls need to be taught how to take a hit. In every girls’ or women’s game I have ever watched or played, there is always at least one instance where I think, “Good thing we don’t have full body-checking because that  player would have been run over.” The female game may not have full body-checking, but girls are going to get hit.

We are doing our players a great disservice by not teaching them how they can protect themselves if (and when) they do get hit. If more coaches, teams and associations start showing girls how to take a hit properly, it will go a long way towards preventing  concussions, as well as a whole slew of other injuries.

It is our responsibility to make sure that our players are prepared, both physically and mentally, each and every time they step out on the ice. This is the key to solving the concussion problem in girls’ hockey.

To get complete access to articles, videos and secrets that addresses the specific needs of female hockey players, visit: www.totalfemalehockey.com. Kim McCullough, MSc, YCS, is an expert in the development of aspiring female hockey players. She is a former NCAA Division I captain at Dartmouth and played in the National Women’s Hockey League for six years. She is the Founder of Total Female Hockey and the Head Coach of the Toronto-Leaside Jr. Wildcats in the Provincial Women’s Hockey League.