The fun of run-and-gun hockey 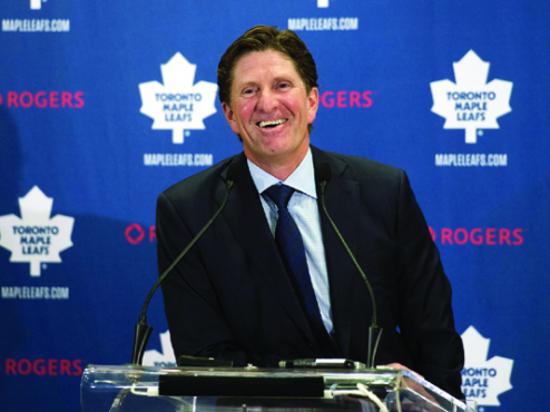 Addressing the press after the high-scoring Toronto Maple Leafs win over the New York Rangers to open the season, Leafs head coach Mike Babcock wore a grin as wide as any kid would after scoring a bunch of goals. But then the reality of five goals-against – and the current coaching “wisdom”– set in, and he finished, “But it’s dumb.” (MapleLeafsHotStove.com)

Run-and-gun hockey might be fun for fans and players, but it’s way outside the norm because it appears that coaches are not in charge. Better to play for 2-1 wins – or even low-scoring losses, because as everyone knows, “defense wins games.” The belief is: If you hold the goals-against down, you have a better chance of success, and you as a coach will be renowned for your defensive systems.

However, failing to promote a creative, DARING offensive attack might be popular (and easy) among the coaching clique, but it draws everyone toward the average, and Babcock has been anything but average. To interject a little math here, when teams play the same way – avoiding turnovers at the expense of high-flying offense – they will tend toward .500 seasons; fans will yawn until there’s a big hit or fight; and players will lose that “little-kid-grin” – the passion that draws everyone into the game.

Babcock knows a lot about winning Stanley Cups and Olympic gold medals, and it’s wise to listen when he says you have to GRIND to win games. You have to play your butt off on defense – backcheck as if your life depends on it, fight for loose pucks like a wild animal, block shots, finish checks, sacrifice for the team.

But don’t buy into the popular trend to play defensively when you have the puck. Dream! Remember the childish thrill of creating scoring plays with your linemates. Babcock wins because – like great coaches in football and basketball – he encourages talented players to play aggressively and creatively on offense, and convinces them to play defense with the same passion.

Turnovers to the likes of Sidney Crosby are a problem, without question. But watching NHL highlights this weekend I saw a team purposely turn the puck over strategically (dumped it deep into the corner as the coach advised) where Connor McDavid picked it up at his own goal line. He skated the length of the ice in a straight line without the slightest fake, and before anyone could say, “Oops,” he left five opponents in the dust, and beat the goalie.

Is that what intelligent defensive systems look like? I’d say, if you plan to dump the puck deep to McDavid (or Erik Karlsson or Crosby, or Ovechkin, etc.). you better teach your team how to score eight goals. then play hard when you don’t have the puck.

That’s the NHL. But winning is not the highest priority for youth coaches. The game is not about your coaching record. It’s about the fun kids can have if they’re allowed to play run-and-gun hockey.