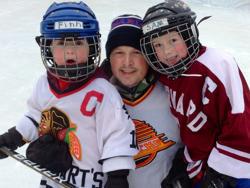 Duluth East product Dave Spehar has been tasked with leading Team Minnesota throughout the famed tournament, played each summer at the West Edmonton Mall in Edmonton, Ontario.

“I think there’s plenty of kids that can play this game all over the state,” Spehar said. “It’s truly an honor for our kids to go up and represent the state of Minnesota.”

The Brick attracts some of the best talent in the Super Novice (9- and 10-year olds) from across North America, and has been the stage for numerous stars at the junior, collegiate and professional levels.

Among the players who will be suiting up for Team Minnesota is Spehar’s son, Sam, who hadn’t participated in organized hockey until this past season.

“We just skated outside,” Spehar explained, adding that his own childhood 'training' regimen included copious amounts of time spent on outdoor rinks.

The health of Spehar’s younger son, Finn, also played a role in the decision to hold off on organized hockey, as the family navigated the murky waters of the effect of certain foods and exercises that accompany diabetes.

“Our youngest, Finn, was diagnosed with Type I diabetes, and basically (avoiding the challenging travel schedule of organized hockey) was the easiest thing for our family,” Spehar said. “We wanted to be able to give Finn the same opportunities that we could give Sam, or any other kid that doesn't have the disease,” Spehar continued. “Our concerns were bigger than hockey at that point.”

With his legend cemented in Minnesota hockey lore by scoring three consecutive hat tricks in the 1995 state tournament en route to the title, Spehar moved on the University of Minnesota, where he would total 61 goals and 129 points before hanging up his skates.

“I wasn’t good enough,” Spehar said with an almost audible shrug about playing at the next level.

Bryan Berard, the No.1 overall pick in the 1995 NHL Entry Draft and Calder Trophy winner as Rookie of the Year in 1997, gave Spehar his first clue that he wasn’t going to make the leap.

“I hopped on the ice with Bryan Berard at 16,” Spehar explained. “I saw him skate at a (national) tournament in Quebec and he didn’t break a sweat. The lightbulb went off that I’m not going to be making $20 million."

Instead of testing the European markets, Spehar entered the world of wealth management, in which he still operates today.

Spehar credits his parents for his perspective, and said that his emotional connection to the game is simple.

“My family wasn't hockey nuts. My dad didn’t play, my mom didn’t play,” Spehar said. “I love the game, and I loved playing hockey with my friends.”