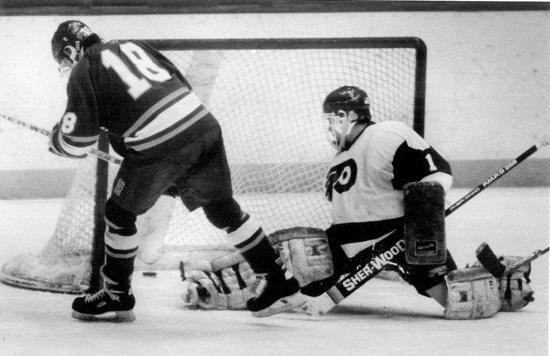 Twin brothers Mark and Mike Strobel have seemingly always been contrarians when it comes to hockey.

The St. Paul natives favored the the Blackhawks and Red Wings, respectively, in their high school days as opposed to the hometown North Stars, and took their talents east on I-94 when they elected to be Badgers instead of Gophers.

This against-the-grain trend may have taken root after their youth careers ended, as the brothers came up in the St. Paul Johnson system but traded maroon for green when they began their freshman years at Hill-Murray.

“It was very difficult playing at a private school in the early 90s. Growing up on the east side of St. Paul built character and toughness," Mike said in a recent email.

“When our freshman year rolled around (at Hill-Murray), we had to start all over and build that character and toughness once again," Mike continued. "Many individuals didn’t accept us right away because of the Johnson/Hill-Murray rivalry. We persevered and stuck it out to become captains and win the '91 state championship."

Mark added that he enjoyed and embraced the rivalry.

“I actually liked the intensity of having to play your best game all the time because it represented excellence and tradition,” Mark said. “The animosity is still there."

As seniors, the brothers took the Pioneers to the state title game, in which right-winger Mike scored twice and defenseman Mark dished out three assists in a 5-3, come-from-behind victory over Duluth East.

The first of Hill-Murray’s three titles almost never came to be, as the Pioneers squandered a 5-0 lead to Forest Lake in the Section 3 quarterfinals before salvaging the win in the second overtime.

In true Strobel style, the near-collapse plays no role in keeping them up at night.

“I have no nightmares about the Forest Lake game because we won and advanced,” Mark said succinctly.

The animosity, so prevalent in their high school careers, carried over into their choice to attend the University of Wisconsin. 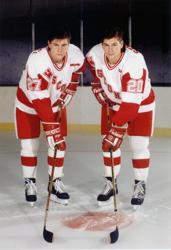 “We still get comments today about not going (to Minnesota),” Mike explained. “We were very fortunate that coach (Jeff) Sauer was a St. Paul guy and loved the way we played."

Moving to Madison paid dividends for the Strobels, as the Badgers made four consecutive trips to the NCAA Tournament while Mark was named Honorable Mention all-WCHA and Mike scored over 100 career points. Both Mark and Mike took their turns being voted Most Competitive Badger.

Mark was signed by the New Jersey Devils and spent time with the team’s AHL affiliate and in the ECHL before entering a coaching saga that’s included collegiate stops at Colorado College, Minnesota-Duluth and Nebraska-Omaha. Mark also had a coaching stint with the now-defunct St. Paul Vulcans of the USHL. In August of 2015, Mark was named Associate Head Coach at The Ohio State University.

Mike has transitioned into the medical device sales profession, and said that he takes his competitive edge into the business world.

“I’ve been in the medical device profession for 20 years and the competitiveness is still there,” Mike said. “The difference is that business is mental and hockey can be physical. There are a handful of ex-hockey players in my line of work that I compete against and work with,” Mike continued.

“Mike Crowley, a Minnesota Gopher and Marty Wiitala, a Wisconsin Badger, are two individuals that work with me and are just as competitive. It never goes away,” he said.