State of Hockey Teams Up to Tackle Hunger 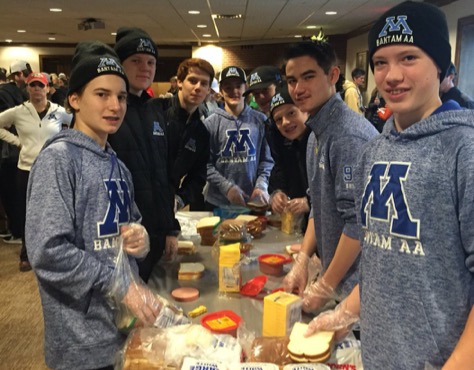 The past five years, Youth Hockey Hub and The Sandwich Project (TSP) have teamed up to make sandwiches for local homeless shelters and low income food shelves in Minneapolis. Each year teams from all over the Metro converge on Christ Presbyterian Church in Edina to make 150 sandwiches per team. This year 40 teams made 6,000 turkey and cheese sandwiches.

Each year TSP administers the making, storage and delivery of 400,000 sandwiches to those less fortunate. "It started out with one group making 150 sandwiches for a shelter downtown," said TSP founder Matt Lockhart. "What was neat, by simple word of mouth and some pretty dedicated volunteers it has grown to a sustainable program that feeds thousands of people each week."