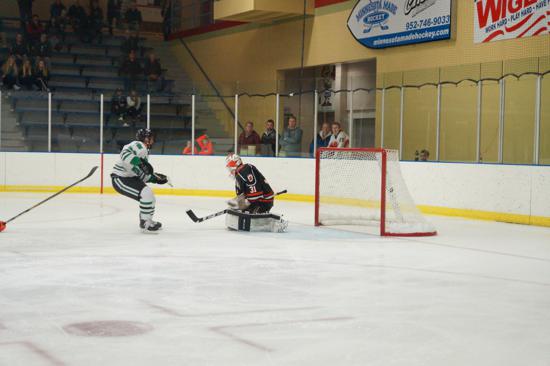 Sometimes it takes a less than perfect win to reverse a losing trend.

“It was a bit ugly, but I’m sure (White Bear Lake) would say the same thing,” Lechner added.

Hill-Murray, ranked No. 4 in the Class 2A coaches’ poll, used four shorthanded goals to beat the No. 20 ranked Bears (3-2-0), getting one each from junior forward Marko Reifenberger, senior forward Luke Ranallo, senior defenseman Sean Ryan, and junior forward Brock Bremer.

“I’ve been doing this (for) I think 35 years, and I don’t think I’ve ever seen four shorties, but we’ll take it,” Lechner said. 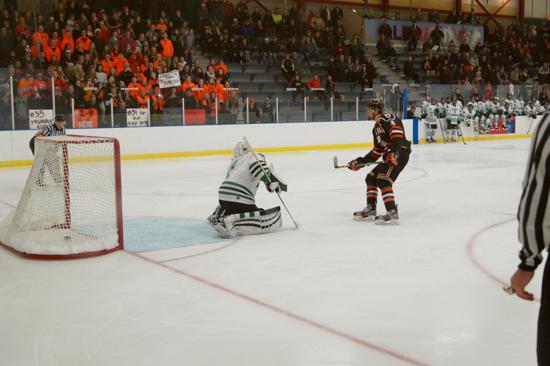 Wyatt Newpower scores on a penalty shot for White Bear Lake in the Bears’ 5-2 loss to Hill-Murray. Credit: Peter Odney.

The victory came after back-to-back losses to No. 3 Benilde St. Margaret’s and No. 9 Wayzata, a streak that Lechner says is unacceptable for the program.

“I’m not trying to say it arrogantly, but we’re not allowed to lose two games in a row at (Hill-Murray),” Lechner said.

The win helps assuage the losses for the Pioneers (2-2-0), and Reifenberger’s two goals should help fire up his scoring prowess that enabled him to post 19 goals and 41 points last season as a sophomore.

“I’ve kind of struggled in past games,” Reifenberger said. “The boys just seemed to really turn it  on in the third, so it felt really good to get (the goals).”

Reifenberger’s performance may have given the junior captain a little more confidence in the team going forward.

“(It’s) really important to get some momentum going forward here,” Reifenberger said. “We’ve had a tough couple of games, but we feel like we’re getting back on track.”