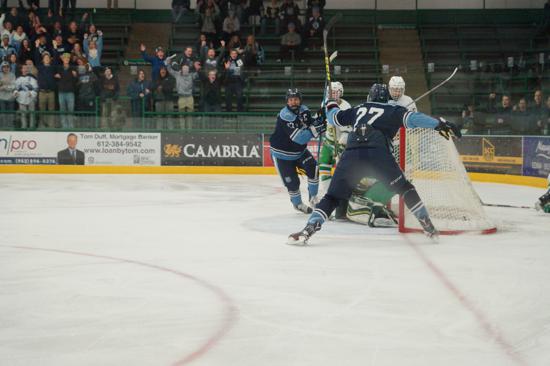 The game could not have ended any better for Blaine.

Luke Notermann slipped a perfect pass across the Edina zone and Riley Tufte launched a one-timed bomb of a shot that beat Hornets goaltender Charlie DeGrood cleanly to give the Bengals (4-0-0) a 4-3 come-from-behind win in overtime on Saturday night.

Bram Scheerer, Ben Tucker and Casey Dornbach all scored for the Hornets (5-2-0), ranked No. 5 in the Class 2A coaches’ poll.

Seniors, co-captains and the returning leading scorers for a Blaine squad that finished as the runner up of the consolation bracket in last season’s Class 2A State Tournament, Notermann and Tufte have been varsity regulars since their freshman seasons. They have also been perfecting that one-timer for quite some.

“Every day after practice,” Tufte said after the win with a smile, acknowledging that he and Notermann have been working on those types of shots with regularity.

Notermann said that the extra practice helps with the Bengals’ top power play unit, which looks for any opportunity to unleash Tufte’s cannon of a shot.

National Hockey League Central Scouting has bestowed an “A” rating upon Tufte, indicating that he could be a first round pick in the NHL Entry Draft this coming June.

Even with Central Scouting’s blessing and standing at 6-foot-5 and over 200 pounds, Tufte admits that staying upright can be difficult when smaller players manage to use their leverage on the ice.

“I’m a big guy, and I try to do my best out there,” Tufte said. “I have to strong on my feet because it’s easier to go down." 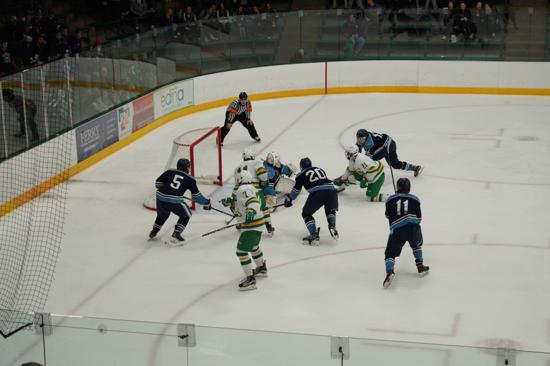 According to Chris Carroll, coach of the No. 6 Bengals, neither Tufte nor Notermann go down very often in practice, pushing their teammates to physically put forth every effort.

“Go ask the rest of the team when they have to practice against them every day,” Carroll said of the physicality of the pair.

Notermann, who scored Blaine's first goal of the game, said that he and Tufte’s practice demeanor helps the Bengals reach each practice’s potential.

“We just try to bring our best every day, and make everybody else better out there,” Notermann said.

Both Notermann and Tufte eclipsed 60 points last season, and finished first and third on the team in penalty minutes respectively.

The pair added to their time in the penalty box in the bruising game with the Hornets, which saw the Bengals go down 3-1 until 12:31 of the third period when Grant Boege scored. Griffin Fussy then tied the game for the Bengals with just under 11 minutes to play.

“We try to make practices as intense as possible,” Carroll said of the game’s physical tone. “But you can’t replicate Braemar Arena on a Saturday night."