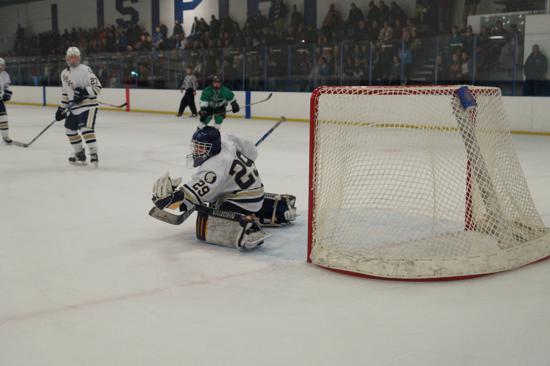 Three consecutive games with one goal and one assist was simply not enough for Jack Johnston.

The St. Paul Academy junior doubled his season total of three goals to six with a hat trick on Saturday afternoon as the Spartans out-skated East Grand Forks in a 7-3 win at St. Paul Academy’s Drake Ice Arena.

“It’s all about speed,” Johnston said after the win. “Move the feet up the ice, move the puck (and) move your mouth talking all the time.”

The win was good medicine for the Spartans, ranked No. 6 in the latest Class 1A coaches’ poll after a tough 3-2 loss to No. 5 Mahtomedi on Dec. 1.

“It was a good bounce-back win,” Spartans coach Matt Funk said. “We talk about improving every day, and I was proud of this group and how we responded.” 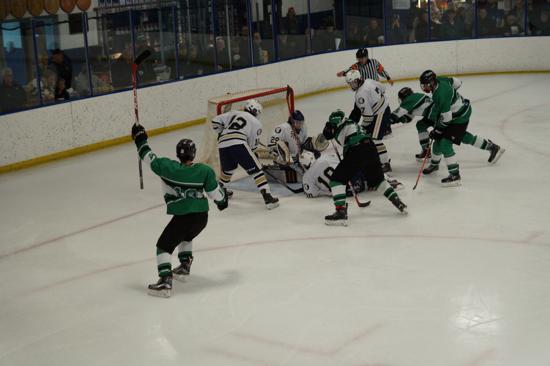 East Grand Forks’ Tanner Tweten reacts as the referee confirms that his shot made it across the goal line. Credit: Peter Odney.

The Spartans jumped on the No. 3 Green Wave early, taking a 3-1 lead after the first period on goals by Johnston and junior forwards Will Kelly and Matt Dahlseide. Davis Beauchamp scored late in the first period to break the ice for East Grand Forks.

Possibly lost in the Spartan scoring outburst was the impressive performance of St. Paul Academy goaltender, sophomore Andy Beran. Beran racked up 27 saves, including 12 in the third period, to secure the win for the Spartans.

Listed at 5-foot-6, Beran says that he adapts his game to his small stature with aggressive play.

“Stepping up, talking to my defense, letting them know where to be,” Beran said, ticking off his duties in the net besides stopping pucks.

Beran split time last season with then-junior David Nicholson, but after Nicholson’s transfer to Holderness Prep in New Hampshire, Beran takes over as the clear starter for the Spartans.

“Nothing’s changed,” Beran said of his mindset between last season and this season. “You’ve got to do everything the same way. You just have to be mentally prepared for every single game.”