No. 14 Ponies Come From Behind to Upset No. 3 Panthers 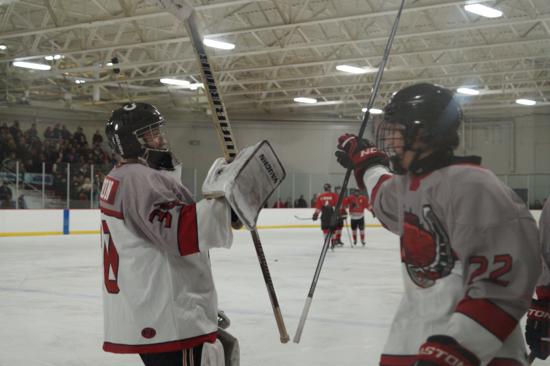 Stillwater’s T.J. Sagissor and goaltender Josh Benson celebrate after Sagissor scored his fourth goal of the game in a 6-5 win over Lakeville North. Credit: Peter Odney.

T.J. Sagissor could not have picked a better game in which to score his first varsity goal.

Or his first four varsity goals.

Sagissor’s four goals and one assist powered Stillwater to a 6-5 win over Lakeville North, last season’s Class 2A undefeated state champions and previous owners of a 31-game winning streak.

“I thought I had one in me, not four,” Sagissor said with a laugh after the game.

Sagissor, who’s brother Simon is a senior on the team, scored twice and earned his assist all in a span of 5:17 of the third period, and the Ponies were able to hold off the Panthers’ late charge to take the game.

“Going down 3-1, and came right back to tie it up, those are the kinds of things you like to see,” Stillwater coach Matt Doman said.

Lakeville North, ranked No. 3 in Class 2A in the Let’s Play Hockey coaches’ poll, pumped 33 shots on goal, with the No. 14 ranked Ponies’ goaltender Josh Benson making 28 saves in the win.

Junior Buzz Eigner took Foss’ place, and gave up the next three goals on seven shots. 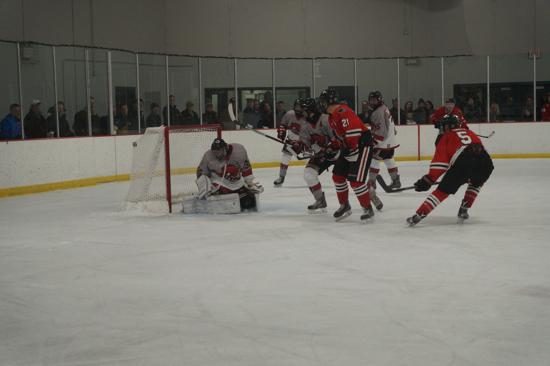 The lack of shots and scoring chances was of no concern for Ponies’ junior Luke Manning, who scored two goals and dished out two assists in the win.

The Ponies certainly showed off that grit in the defensive zone, blocking several Panther shots and disrupting numerous passing plays.

“We definitely like it when people block shots,” Manning said. “They’re giving up their body to the team, and that symbolizes how much each person has put into the game for this team to be successful.”

Doman said that Sagissor has dealt with a back injury, which has slowed his varsity progress, suiting up for half the team’s games last season.

“It’s great to see (Sagissor) in that position,” Doman said of the scoring burst. “The boys were definitely fired up for that.”