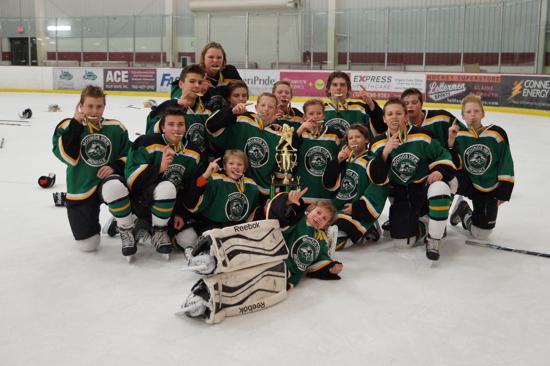 The Mounds View/Irondale Peewee A team earned a “taste” of victory in the championship game of the Super Rink Spectacular. Credit: Peter Odney.

Sunday’s Peewee A final of the Super Rink Spectacular had it all, and Mounds View/Irondale emerged victorious 4-3 over Mankato.

MVI and Mankato both entered the championship game with spotless 3-0-0 records, winning Pool B and Pool C respectively. Mankato had allowed just 3 goals in Pool Play.

The teams traded goals in the first period with Mankato drawing first blood on an unassisted goal by Wyatt Fowlds, and MVI’s Tyler Chamberlain tying the game just 35 seconds later on assists from Oliver Moore and Nick Sajevic.

The second period was scoreless, but didn’t lack in chances for the Mustangs, ranked No. 3 in the Youth Hockey Hub Peewee A rankings. No. 8 ranked Mankato’s Riley Madsen made eight clutch saves in the second frame. 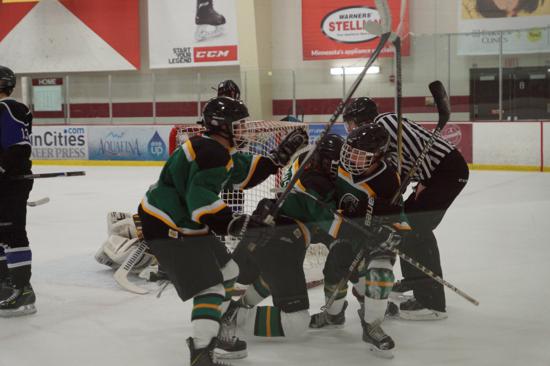 Mounds View/Irondale players mob Carson Brodt after he scored the game-winner with 1:58 to play in the title game. Credit: Peter Odney.

In the last 8:55 of regulation, the teams combined for five goals, starting with Mankato’s Hayden Guillemette converting a pass from Layten Liffrig on the power play.

MVI’s Chamberlain scored his second goal of the game unassisted just 50 seconds later, but Mankato’s Jacob Kazenbach put the Mavericks ahead 3-2 with 6:19 to go on another man-advantage.

With 3:40 to play, MVI’s Zach Reim tied the game, and Carson Brodt banged home a rebound with 1:58 left on the clock for the eventual game-winner.

The drama wasn’t over yet, however, as Mankato pressured a Mustangs’ defenseman into intentionally covering the puck in his own crease, earning the Mavericks a penalty shot with under a minute left in the game.

MVI’s Keagan Remore stood tall on the penalty shot, challenging the shooter and deflecting the shot into the netting above the glass and securing the win for the Mustangs.