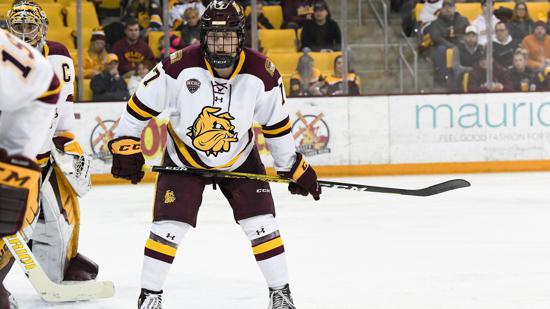 Scott Perunovich helped lead the Bulldogs to two national titles and was named the 2020 recipient of the Hobey Baker Award as college hockey's top player. (photo courtesy of umdbulldogs.com)

UMD's Scott Perunovich and Coach Rick Comley to be honored

Rick Comley will also be honored with the Hobey Baker Legend of College Hockey ward.

The Hobey Baker Award will hold a combination golf outing and banquet on Thursday, Aug. 6 at Royal Golf Club in Lake Elmo, Minn. to honor the 2020 Hobey winner Scott Perunovich of the University of Minnesota Duluth. The event will take place at The Royal Golf Club in Lake Elmo, Minn. The event will also honor the Hobey Baker Legend of College Hockey for 2020, coach Rick Comley.

“The COVID-19 pandemic has affected all aspects of live entertainment including our originally scheduled banquet/golf outing for June. As the nation is slowly reopening, we are moving ahead with our plans and will have proper protocols in place for this event,” commented Hobey 2020 Chairman Chuck Ranney.

“When the sports world came to a screeching halt in mid-March, that included the NCAA Frozen Four championship tournament, where we usually announce our winner in a formal presentation. Since these three student athletes never had an opportunity to enjoy their national recognition, we wanted to honor all three finalists at this event,” added Ranney.

Following the college hockey season, Perunovich signed a pro contract with the St. Louis Blues and Swayman signed with the Boston Bruins. Kawaguchi has already announced his plans to return to North Dakota for his senior season.

Perunovich became the first defenseman to lead the NCHC in conference scoring and finished tenth overall in the nation while leading the country in assists by a defenseman with 34 in 34 games. Scott had also won two straight national titles in his first two seasons on campus and he and his Bulldog teammates were well positioned for a third straight title run.

Coach Comley guided three different college programs over his 38-year career winning titles with Northern Michigan in 1991 and Michigan State in 2007. He had 738 career wins becoming only the fifth head coach to surpass 700 victories.

The Hobey Baker golf/banquet outing will also include a silent auction of sports memorabilia along with a cigar roller on site. The banquet will be held in an outdoor tent with limited seating at each table. Master of Ceremonies for the banquet presentation will be ESPN commentator Clay Matvick. Tickets for the banquet can be purchased at hobeybaker.com/banquet.