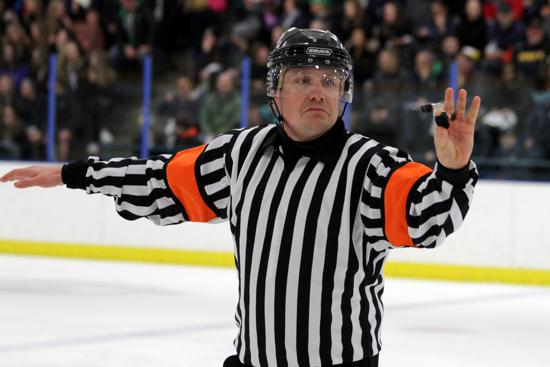 Truth is, Colorado Springs does great work for amateur hockey.

But there’s always room for improvement.

And that’s where OS comes in. See, through this column, OS points out various problems with the governing organization. And one must identify a problem in order to remedy that problem.

Tell us something we don’t know.

The above reasons are absolutely correct. No dispute there. It’s just that the Colorado poo-bahs quickly overlook the other reason for attrition which has always resulted in more aggravation than anything else.

Here’s how it goes. Joe Smith and Joe Smith, Jr. are Level 3 and Level 1 refs respectively. It’s late July and their email inboxes start welcoming them to another USA Hockey season. Reading on, both Joes flinch at the open book, closed book, safe sport, in-person seminar and additional fingerprinting prerequisites simply to fight through the old boys’ network for the privilege of being abused on the ice by house league coaches and team managers.

“Remember, how it said that a lawyer appearing before the Supreme Court had less hourly annual bar registration requirements than we did just to become a USA Hockey official last season?”

“That’s insane, Pop. I don’t have twelve free hours next month. Not with football, debate club and LSAT prep classes. Just to get a game or two on the weekend. Not worth it dad. I’m out.”

“Been thinking the same, son. Who needs this? Those schedulers pulling in nearly six figures assigning their buddies to the top games and your old man can’t even get a band slot in a low level JV contest. Not to mention the whining, complaining and unprofessionalism from coaches and beer league hacks.”

“Yeah Dad. Rather save those twelve hours of registration requirements and take a couple fishing trips to the U.P. with Uncle Hank this fall.”

Read that again USA Hockey. Then add it to the list of reasons for departing officials.

Now do something about it.