A lesson in resiliency and leadership

Charlie Strobel never gave up on his teammates, or himself 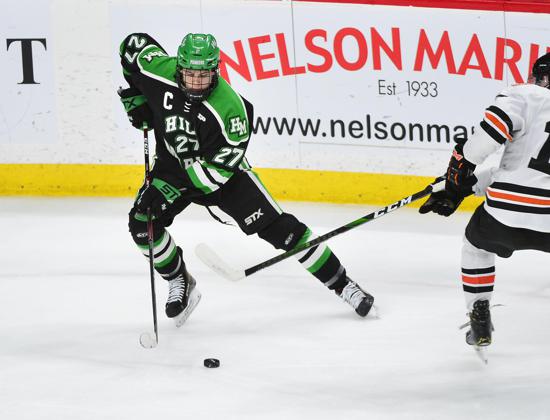 Charlie Strobel led the Pioneers to their fourth state title in school history. 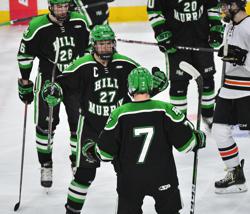 Strobel (27) congratulates Nick Pierre (7) after a goal in the state tournament.

All one had to do was watch Charlie Strobel’s celebration after the final buzzer sounded in the Class AA Championship game March 7 at the Xcel Energy Center to know he truly has a knack for finding the back of the net.

The senior captain, who scored twice and assisted on another goal to lead the Pioneers to their fourth state championship in school history with a 4-1 win over Eden Prairie, leaped over his teammates who had piled on senior goaltender Remington Keopple and ended up in the back of the net.

“I saw (Nick) Pierre flying in and he stepped on his stick and fell,” said Strobel about his post-game celly. “I thought I had it timed right. Next thing you know I missed everybody and was in the net.”

Strobel had come a long way to get to that point, to being one of 20 kids celebrating the dream every youth hockey player in Minnesota hopes to live out one day. So had his teammates. While they were on the radar in a year when there was no clear favorite, they weren’t exactly on the short list of teams that would likely find themselves tossing their gloves and sticks in the air celebrating a state title.

Early on in the section finals against White Bear Lake it appeared they might not even get to the state tournament. The Bears staked themselves to a 2-0 lead only to watch the Pioneers score three unanswered goals, including one from Strobel, one from Owen Quast and one from Nick Pierre. Pierre is a smooth skating sophomore who has an extra gear. Quast is a third-line center who helped will his team to state and although he didn’t score a lot, when he did he made sure it mattered. His tying goal against the Bears helped set up Pierre’s game-winning short handed goal.

Strobel, who hails from strong hockey bloodlines (his father and uncle both played and won a state title for Hill-Murray in 1991 and played at the University of Wisconsin), entered the state tournament without a college commitment. It wasn’t so much that Strobel himself was reluctant to commit (there were a couple schools who had shown some interest), there just weren’t a lot of colleges knocking down his front door. With so many players committing as freshmen or sophomores, including three of his younger teammates, Strobel’s name was still out there.

“You wondered why he was under the radar because there was a lot of skill there,” said Hill-Murray Head Coach Bill Lechner.

There were also his leadership skills. Strobel was unanimously voted team captain by his peers. Fellow seniors Henry Eischen, Seamus Regan and Remington Keopple were also voted captains and all brought different leadership qualities to the team. But it was Strobel who was the most vocal. He was the motivator.

“It was very noticeable that he was the kids’ leader,” said Lechner. “Us coaches put our blessing on it.”

Lechner knew the players would follow Strobel’s lead and wanted to make sure he harnessed all of his energy in a positive way. Lechner described Strobel as a stallion – a horse running free that at times needed to be saddled.

“He has so much skill and talent, it just needed to be channeled a little bit,” said Lechner. “As a sophomore he was young and on varsity and worked hard, listened and really respected the upperclassmen. His junior year you could see his game emerging and I thought he would really have a breakout year as a senior.”

Around Christmas time Lechner and Strobel had what Lechner described as a “come to Jesus” talk about leadership and defining roles on the team. He said Charlie took it to heart and reacted very positively. As a result, the team started to come together.

“He had great energy,” said Lechner. “He was the hardest worker in practice, he led in the team bonding activities. He lived it on the ice and in practice every day.”

That energy seemed to send a jolt throughout the rest of the team. After Christmas is when the season really starts to take off for most teams as they feel their way through the competition and get a good sense of who they are as a team. That is when things started to come together for the Pioneers.

“It started taking off from there,” said Lechner. “Charlie was very confident about our team and it was fun to watch him in pre-game. He’d tell the kids to leave it all on the ice. He took it to heart. He led it and he lived it.  The rest fell into place.”

Charlie drew on advice from his dad, Mike, who was a co-captain on the 1991 state championship squad.

“Being a captain is an honor,” Mike told his oldest son. “With that comes a tremendous amount of pressure, especially at a school like Hill-Murray. We talked many times throughout the year about the identity of the team and how it will be shaped come playoff time.”

Mike and his wife Jill attended high school together and have two sons. Charlie’s 16-year-old brother Ryan has special needs, cannot speak and also suffers from seizures. Charlie has been there for his brother from the start and calls him his best friend in life.

“Charlie loves Ryan unconditionally and that is what keeps him grounded no matter what,” said Mike.

As Charlie’s game progressed, so did the team’s. His leadership combined with his skill made him into a more complete player. But he was still a player that wasn’t raising eyebrows with explosive speed, highlight-reel goals or jaw-dropping assists. Instead he willed his way to the back of the net through unyielding determination. His teammates followed their fearless leader with that same refuse to lose attitude.

“The team has to trust the captain or captains, especially when you have a younger talented group like Hill-Murray did this year,” said Mike. “If you’re the voice, you better be able to back it up with action. Once you gain that trust and everyone buys in, the possibilities are endless.”

The Pioneers lost to White Bear Lake in the section finals in Strobel’s junior year. The year before that they went to state, but made an early exit and lost both games. Now a senior, he and his senior teammates and fellow captains were determined not just to get back to state, but get to that Saturday night game where anything can happen.

“After junior year we felt we had some unfinished business to take care of,” said Charlie.

The goal was to bring the team together, young and old, to build a team-first mentality from the top player on down to the 20th.

During the summer he and his teammates were working out at a summer camp. They asked themselves a simple question: "why can't we be state champions?"

“We knew it wasn’t going to be easy,” Strobel said. “But as long as those 20 guys bought into what we were saying, we knew we had a chance. I knew I had their back and I knew they had mine.”

Charlie admits there were bumps in the road as the team developed throughout the year. But he knows that with those bumps come adversity and with adversity comes lessons. Without those bumps, Charlie doesn’t think neither he nor his team would be where they were on March 7, gearing up for a chance to win a state title. But getting there wasn’t enough. Not after all they had been through together – not after all of the blood, sweat and tears that encapsulates a high school hockey season.

And despite the Pioneers being one of the top programs in the state, they were facing an Eden Prairie squad loaded with talent. The Eagles were the clear favorite, having spent several weeks as the top rated AA team in the state and with a slew of Division 1 commits.  After an overtime win the night before against St. Thomas Academy, would the Pioneers have enough left in their tank to get past the soaring Eagles? They also were without their top blue liner in Joe Palodichuk, who came down with mono after Friday night’s game.

But adversity was nothing new to the Pioneers, and certainly not to Charlie Strobel.

The recipe for their success was simple and was Strobel’s mantra throughout the year. Work harder than the other team and leave it all on the ice. Never, ever get outworked.

Strobel scored twice and assisted on another goal. Their defensive zone play was relentless and Keopple did what he had done all year and kept the puck out of the net. They also got another huge goal from Owen Quast and one from junior defenseman Matthew Fleischhacker.

The Pioneers won the game 4-1. They were state champions. Strobel’s emergence as a player and leader was as big of a difference-maker as any. But ultimately, as he will tell you, it was a total team effort.

“We bonded and we worked,” he said. “We just never quit.”

Strobel finished the regular season with 19 goals and 21 assists and 40 points. But it was the elevation of his game when it mattered most that started drawing attention from Division 1 coaches. He scored eight goals and had six assists in the team’s six playoff games, including four goals and two assists in the state tournament. He finished the season with 54 points in 31 games. By the end of the tournament it was clear. Charlie Strobel was the best player on the ice when it mattered most. He deserved a Division 1 tender, and it didn’t matter that it didn’t come when he was a freshman or a sophomore.

Strobel was contacted by several schools after the state tournament, and a short time later Bob Motzko offered Strobel an opportunity to be a Minnesota Gopher. The decision was easy for Strobel. He visited the school and knew right away he wanted to be a Gopher. For a player who flew under the radar for most of his high school career, Strobel is proof that the state tournament is indeed the ultimate stage, and that determination, passion and hard work have no substitutes. And that a player should never give up or give in just because they aren’t heavily recruited and commit early in their high school careers.

“I couldn’t have done it without my teammates, my buddies. They are my best friends,” Strobel said. “I am excited to be a Gopher.”

It was a long path for Strobel to realize his dream of winning a state title and earning a chance to play Division 1 hockey and be a Minnesota Gopher.  Along the way there were questions that always didn’t reveal easy answers, obstacles that at times seemed insurmountable, and an ultimate goal that sometimes seemed unattainable.

“I have been through a lot of adversity,” Charlie said. “I wanted to prove people wrong. I just had to stay on the path and never quit.”

Strobel’s story is a living testament to every young player growing up in the State of Hockey that through hard work, determination and resiliency that dreams really do come true.

He never wavered from the most important things in his life – God, Family, and his hockey family.

“I knew one day my time would come,” he said.

It most certainly did. 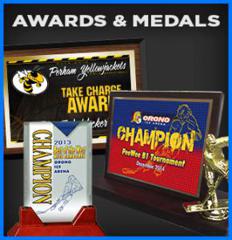