Mr. Hockey Blake Biondi reflects on his decision to stay and play with his best friends 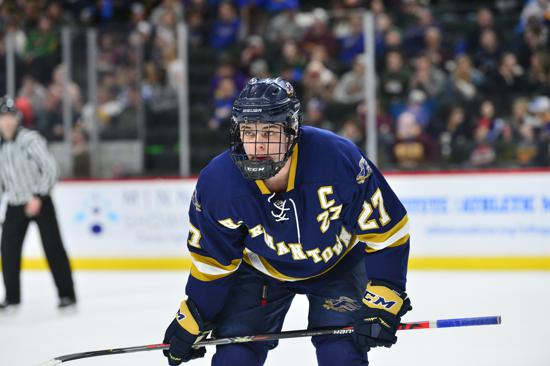 “I believe that playing for something bigger than yourself and trying to get your best friends and school to the state tournament is what makes the sport of hockey so amazing,” he said. “High School hockey is something you’ll never get back, and playing on the stage of the state tournament with the boys you grew up playing with is the best thing in the world to me. Bringing your team together to work for a state championship is something I would want every player to experience and I will forever be grateful for that opportunity.” 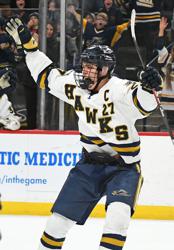 Biondi racked up 95 points and led the Hawks to a second place finish in Class A.

The State of Hockey is filled with outstanding young hockey players and has a long history of producing the best players the United States has to offer.

Biondi was a three-year starter for the Hawks, a perennial power in Class A hockey, and racked up 95 points this season.

Hermantown Head Coach Patrick Andrews was fortunate to coach Biondi in both bantams and at the high school level. He saw early on that Biondi was going to be special.

“His first year of bantams he was excellent for us,” said Andrews. “He was a top guy that first year, on the power play and centered our second line. He had that X factor. A super headsy player and his skills were through the roof.”

Biondi grew up on the neighborhood rinks in Hermantown under the tutelage of his father, Joe, who played high school hockey at Warroad and then four years at the University of Minnesota-Duluth from 1989-1993. He was a 9th round draft pick of the North Stars in 1990.

“My father has taught me everything about hockey and how I should be as a person,” said Biondi, who is following in dad’s footsteps and will play at UMD as well.

Biondi and his buddies would hit the rink as soon as school let out and skate until 9 p.m. They did this every day. That’s when he fell in love with the game of hockey. He hasn’t looked back since.

He took advantage of all of the ice time that was available in Hermantown. If he finished an organized on-ice workout and there was ice available afterwards, Biondi would keep the gear on and keep skating. During the summer he would finish Andrews’ summer camp and then hop on the ice again.

“In Hermantown we have our ice in all year long,” Biondi said. “For me, this was a massive advantage. I can’t thank Dave Huttel enough along with Hermantown Hockey for all of the ice time.”

Not all his hockey was played in Hermantown however. He joined the Lake Superior Stars and played in a ton of tournaments in the cities. His development increased year after year. By the time he was a second year bantam he put up 81 points in 39 games. That next season he played one period on the junior varsity team. That’s when Coach Andrews decided against it.

“Us coaches said, nope…he can’t get tired playing JV,” Andrews said. “He stepped in and played varsity right away and was an immediate impact guy.”

As a sophomore he notched 58 points, including 14 points in six playoff games as the Hawks advanced to the state tournament and finished third. He finished with 30 goals and 28 assists.

As a junior he was clearly the team’s top talent and already drawing raves from scouts. Not only does he have skill, he has size. At 6’0” and 180 pounds he possesses a strong frame with a combination of speed and solid stick work. His best asset might be his shot.

“I feel I have a quick release and am a natural goal scorer,” said Biondi.

Scouts rave about his explosive first step and how it gets him to loose pucks and about his lethal shot and net front presence that should translate well as he plays at the higher levels. Heading into his junior season he tore up the elite league with 21 goals in 21 games. Described as a complete 200-foot player, it is not just Biondi’s physical skills that make him a projected mid-round NHL draft pick, it is his on-ice awareness and hockey IQ, something instilled in him early on and learned throughout the countless hours spent on the ice.

He is also an ultra competitor.

“I feel my compete level and drive to be the best separates me from my competition,” Biondi said.

“He hates to lose at anything,” said Andrews. “Even a drill in practice. He battles at everything and wants to win at everything. He’s also incredibly strong, his wrists are strong and he gets low so he’s hard to knock off the puck.”

He is also selfless.

“He is not an individual,” said Andrews. “He thinks the game so well and it translates to playing with better players.”

Players of Biondi’s caliber often get pressure to make the jump from high school hockey early to play a more competitive game at the junior level with players of similar size, strength and speed.

But for Biondi, that wasn’t an option.

“I had pressure to play juniors both junior and senior season,” Blake said. “But for me, playing my senior season with my best friends and trying to get back to the state tournament was something I would never miss. I wanted to give back to the place that had given me everything and in doing that I learned more than I could ever have thought about myself, my team, and bringing a group of brothers together at the right time.”

Leadership is also a big part of Biondi’s resume. After the Hawks lost in the section finals after Biondi’s junior season, he told Coach Andrews he was coming back. The next day he was in Coach Andrews’ office and said, “I want to come back and win a title.”

“It was completely selfless for him to come back and play his senior year,” said Andrews. “He had a lot of people telling him it was not the right thing to do.”

Andrews said that is when Biondi emerged as a true leader. He was always the best player on the ice, but he also understood that it took 20 guys to win a state championship.

During his senior campaign Biondi was labeled as the state’s top talent. That put a bull’s-eye on his back. He was double and triple teamed every night. Still, he was putting up numbers and the Hawks were winning games.

“He was on another level this year," Andrews said. “He was dominant, the best player on the ice every time we played and we played against some good teams with some great players. At times he was a man amongst boys.”

The Hawks coasted through sections, outscoring opponents 26-1. Biondi racked up six goals and 12 points. They made it back to the state tournament where they beat Monticello 7-1 behind three goals and two assists form their senior captain. He notched a goal and an assist in the semifinal 6-2 win over St. Cloud Cathedral. And then they ran into Mahtomedi and despite outshooting them 42-12, the Zephyrs won 3-2 in overtime. It was a disappointing loss for the Hawks and for Biondi. But looking back, the experience he had with his best friends, win or lose, will never be forgotten.

There certainly are zero regrets for playing his senior season as a Hermantown Hawk.

“Playing my senior year at Hermantown with my brothers in front of my community was the best thing I have done in my life so far,” he said. “I would never leave to play somewhere else and will never regret staying and being a Hawk.”

For Biondi, the ultimate goal is playing with those you care about the most and chasing a common goal.

“I believe that playing for something bigger than yourself and trying to get your best friends and school to the state tournament is what makes the sport of hockey so amazing,” he said. “High School hockey is something you’ll never get back, and playing on the stage of the state tournament with the boys you grew up playing with is the best thing in the world to me. Bringing your team together to work for a state championship is something I would want every player to experience and I will forever be grateful for that opportunity.”

Biondi has advice for other young players who may be struggling with the decision to stay in high school or make the jump to juniors.

“If you are good enough the right people will find you and you will make it,” he said. “There is no reason to rush to leave to play in other leagues. Enjoy where you are now, love the game because it is bigger than all of us, and trust in the people around you.”

Biondi is grateful for the high school experience he has had. He has plenty of hockey in front of him and will likely be selected in next month’s draft. With his size and skill, chances are he will don an NHL sweater some day. And he will never forget and always cherish where he came from.

“I just want to thank Hermantown Hockey and the State of Hockey for everything you have given me,” he said.