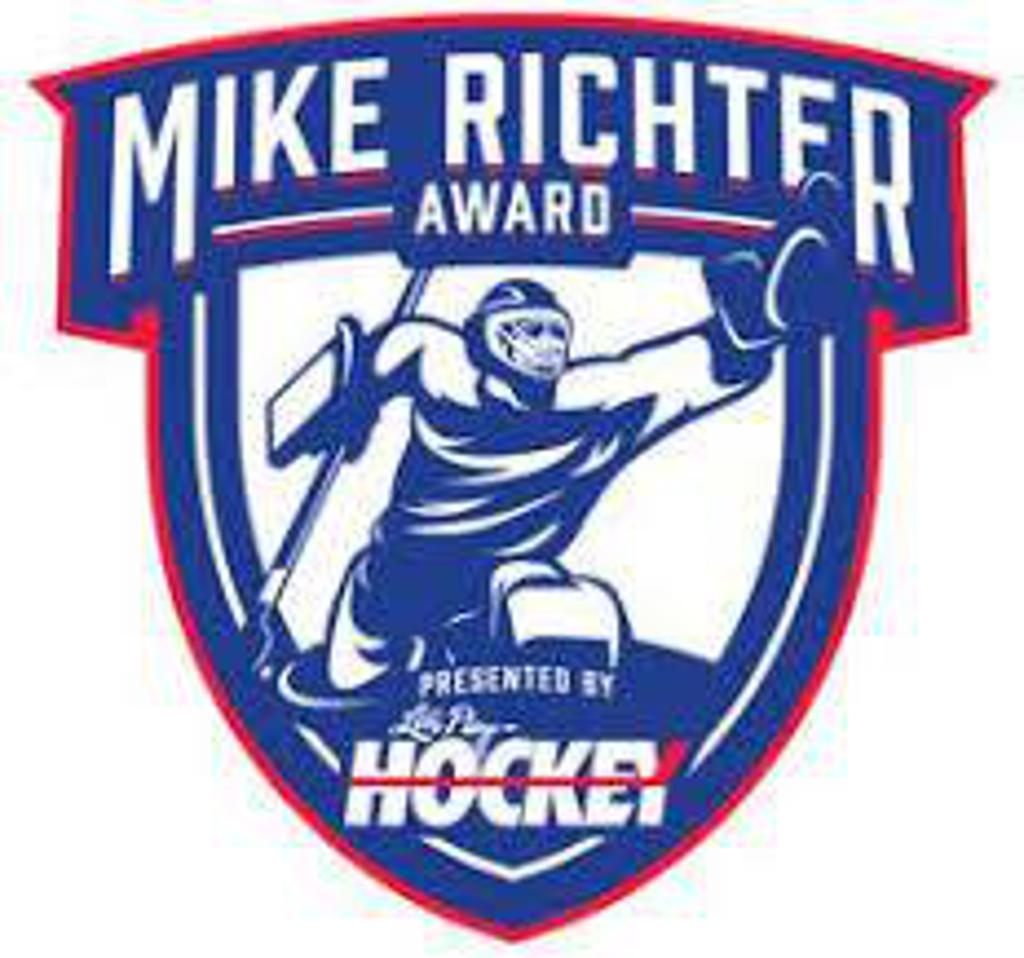 The 10 semifinalists represent five hockey conferences, led by Hockey East with three goaltenders on the list. The WCHA, Big Ten and ECAC each have two semifinalists and the NCHC has one. The 10 semifinalists have combined for 211 wins, a 1.91 goals against average, a .934 save percentage, 46 shutouts and have stopped a total of 8,779 pucks.

The ten semifinalists are listed in alphabetical order:

After a solid sophomore campaign, Driscoll emerged in his junior season to post outstanding numbers including 21 wins, 4 shutouts and a 1.63 goals against average (ranked 3rd in NCAA). The Apple Valley, MN native also ranks fifth in save percentage (.937) and sixth in wins. Driscoll had five games with 30 or more saves. His best game came in a 4-2 win over Minnesota State on Jan. 25 when he recorded 48 saves. Driscoll is an accounting major and has a grade point average of 3.79. “Zach’s success as a goaltender is a direct reflection of his work ethic and determination to continually elevate his game day in and day out,” said head coach Tom Serratore. “His will to win and competitive fire is contagious. He has the ability to steal you a game and make a big save when you need it most. His athleticism, ability to read the play and manage the game has given our team a true sense of confidence with him in the net. Not only is he a tremendous goaltender, but a fantastic human being. His team-first attitude, passion for our University and effort in the classroom has garnered the respect of our entire team and coaching staff.”

Galajda helped his team to a No. 1 ranking at year’s end by posting impressive numbers, including winning his first 10 games of the season. A product of Aurora, Ontario and the Victoria Grizzlies of the BCHL, Galajda played 99.9 percent of his team’s minutes and his .862 winning percentage that led the nation with a 23-2-4 record. He posted five shutouts and a save percentage of .931. His goals against average of 1.56 is second in the nation. He allowed two goals or less in 25 of the 29 games he started. Galajda was a Mike Richter Award Finalist in 2018 and also a Hobey Baker Award finalist in 2018. He is majoring in Hotel Administration and sports a 3.72 GPA. “I feel Matt Galajda is the most underrated goalie in the country,” said head coach Mike Schafer. “I think the telling statistic is that we had 3 freshman defenseman play ever game this year.  Where did this show.  It really showed on our penalty kill where we had 5 defenseman killing penalties who had never killed for us before and our statistics showed because of this. We only gave up 45 goals against and 21 were PP goals.  Of the 21 he had no chance on 12 of them because they were back door or one-timer through traffic.  I have gone through all his goals and I only have him for three soft goals all year.”

Knight was a first round pick (13th overall) by the Florida Panthers in last year’s draft and showed why by helping Boston College to a 24-8-2 mark this season. Knight won 23 of those games and his winning percentage of .727 ranked fifth. He also posted a 1.97 goals against average, which ranked 9th in NCAA and a .931 save percentage, which also tied him for ninth amongst Division I goalies. He tied for third in the nation in shutouts with five and ranked 19th with 872 saves. Knight was a member of the Under 18 National Development Team. He is majoring in Marketing and has a 2.80 GPA. “He had a remarkable freshman year at Boston College and became a valuable and respected member of our team,” said head coach Jerry York. “We’ve had a lot of tremendous goalies at BC like Schnieder, Demko and Woll, and Spencer is progressing in similar fashion.”

Lethemon enjoyed a solid senior campaign for the Spartans, playing 89 percent of his team’s minutes and posting a 2.13 goals against average which included five shutouts. He was a finalist for the Big Ten Goalie of the Year Award and his .935 save percentage was the third best in school history and ranked sixth in NCAA this season. He faced 1,062 shots (T-5th in NCAA) and had 993 saves (4th in NCAA). Lethemon led the Big Ten in conference play in GAA (1.99), save percentage (.942), Shutouts (4) and saves (743). Lethemon is an advertising management major and has a 3.01 GPA.

Mann was stalwart in goal in his second season for the Wolverines  finishing third in the nation in save percentage (.939) and playing 97.8 percent of  his team’s minutes. The sophomore from Greenwich, CT, played in 21 games as a freshman before earning the starting role this season. He also recorded six shutouts, second most in NCAA and finished with a 1.85 GAA, good enough for sixth overall. He had 30-plus saves in 13 games and had more than 40 saves twice, including a 48-save effort in a 2-2 tie at Minnesota on Feb. 28. Mann is a member of the Ross Business School and has a 3.91 GPA. “Strauss is a tremendous young man who would make Mike Richter extremely proud if chosen for this award,” said head coach Mel Pearson. “I’ve been around college hockey for 38 years and Strauss is one of the finest young men you will ever find. He is the consummate student athlete.”

Marotte filled a huge hole in goal by stepping for last year’s Mike Richter Award finalist Jake Kielly and started all 34 games and played all but 44 minutes for the Golden Knights. He had 12 games of 30-plus saves and was named ECAC Hockey Ken Dryden Goalie of the Year and was a first-team all-star. The Quebec native finished fourth in both save percentage (.938) and goals against average (1.78). He also posted four shutouts and led his team to a 23-8-3 mark. “We were extremely fortunate to have Frank join our program this year,” said head coach Casey Jones. “With the loss of Jake Kielly, who signed a NHL contract after his junior year, we knew we were going to need some more help in the crease this season. And Frank gave us an unbelievable effort. Frank had the best, most consistent year I have seen at the position in my career. He was our go-to guy right from the start and carried that throughout the season, starting every game. The best thing about Frank is that he is very calm and that brushes off on the rest of the team. He gave us confidence right off the bat.”

McKay helped lead the Mavericks to the top ranking early on and led the nation in multiple categories including wins (30), GAA (1.31), Save Percentage (.942) and shutouts (10). His 10 shutouts is second in NCAA history. He was also named WCHA Goaltender of the Year and was an 8-time WCHA Goalie of the Week winner. He set school records for single-season shutouts and career shutouts and also set school records in wins, save percentage and goals against average.  McKay is a finance major with a 3.86 GPA. “The success of any hockey team starts with their goaltender and Dryden McKay has been the backbone of our team for the last two seasons,” said head coach Mike Hastings. “He’s a technically sound goaltender who is intelligent with tremendous anticipation.   His work ethic, demeanor and competitiveness separates him from most goaltenders and the numbers that he’s put up this season speak for themselves. Having played in 37 of 38 games this year and 71 of 78 games for his collegiate career, one of the most important qualities of  Dryden’s body of work has been his consistency.  He was the most important factor in us accomplishing back-to-back 30-win seasons. He’s also great in the classroom, carrying a 3.86 grade point average and being recognized by our league as a WCHA Scholar-Athlete and being named to the WCHA All-Academic Team this year.”

Shepard is a two-time Richter Award finalist and has followed it up with another impressive campaign, helping lead the two-time defending champion Bulldogs into the 2019-20 season. Shepard started all 34 games and compiled a 22-10-2 record and a 2.18 goals against average and .918 save percentage. He was named the NCHC Goaltender o the Year for the second straight season and led the NCAA in percent of his team’s minutes played (99.2%). He was the first Bulldog goalie to be named captain in 43 years. He also made an NCAA record 115 consecutive starts before the season came to an abrupt end this year. “Hunter had a tremendous career here,” said head coach Scott Sandelin. “He was a rock for us, game in and game out, and was a huge reason why we had the success we did. I know our team has the utmost respect for him because of his work ethic and the way he leads by example. That’s why we made him one of our captains this season.”

Swayman, a fourth round draft pick of the Boston Bruins in 2017, finished his junior season at Maine with stellar numbers. He played in over 2,000 minutes and led the nation in saves with 1,099 also posting a 2.07 goals against average and his .939 save percentage was second in the nation. He faced 1,170 shots and allowed just 71 goals. He stopped more than 30 shots 25 times during the season, more than 40 twice and more than 50 (52) once.  Swayman is a Management major with a 3.38 GPA. “Certainly Jeremy’s numbers this season are impressive and these speak for themselves,” said head coach Red Gendron. “The numbers provide evidence of his excellence but more than that, he provided our team with tremendous confidence because we all understood that he would make the saves we needed, whenever we needed them, ultimately leading to our team’s success.  His work habits and disciplined professionalism rivaled other great goalies I’ve been privileged to be on teams with like Martin Brodeur and Jon Quick.  These things can’t be seen by just looking at numbers but everyone here understands how real it truly was.”

Wall, a 2016 drat pick of the New York Rangers, played 94 percent of his team’s minutes and won 18 games. The senior posted a 2.10 goals against average and recorded 925 saves. He had 30-plus saves in 15 contests and 40-plus saves three times. He also allowed two goals or less in 22 of his 32 starts. Wall is a Mechanical Engineering major with a 3.36 GPA.  “Tyler had a the type of season that deserves a Player of the Year Nomination,” said UMass Lowell Head Coach Norm Bazin. “As his coach, I think the world of him. He has been our MVP this year and was the reason we finished one point out of second place.”

The 2020 Richter Award winner will be announced April 10. Due to the uncertainty of the Covid-19 outbreak, a site and time have not been determined.

Candidates for the Mike Richter Award were determined by nominations from all 60 NCAA Division I Men’s Hockey coaches.

The finalists and winner are selected by a committee of coaches, scouts and members of the media.