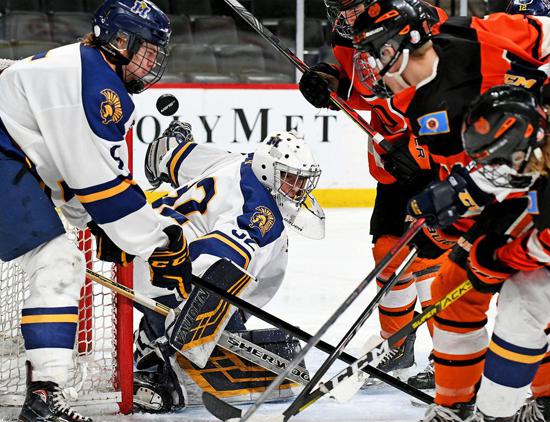 No. 5 seeded Delano had No. 4 seeded Mahtomedi on the ropes Wednesday evening in the final quarterfinal game of the Class A state playoffs. Delano went up 2-0 early on in the first period but Mahtomedi stayed poised and were able to mount a comeback, winning 5-2.

Delano’s Jesse Peterson put in the first goal of the game during a powerplay situation after cradling in an assist from Trevor Oja. Two minutes later Delano scored again as Gunnar Paulson netted the puck to help give Mahtomedi an early 2-0 lead.

Mahtomedi’s Billy Buttermore helped give his team hope by scoring early in the second period to cut the deficit down to one goal. Going into the third period Delano still held a 2-1 lead but Mahtomedi’s offense exploded in the final five minutes of the game and they ripped off four goals to build a 5-2 lead.

Adam Johnson, JD Metz, Nikolai Dulak and Colin Hagstrom all scored in the third period to steal a late game victory and advance to the semifinal round against No. 1 seeded Warroad.

Mahtomedi finished the game with 34 shots on goal while Delano recorded 20 and each team was able to capitalize during a powerplay. The semifinal round is now set and Mahtomedi’s matchup against top seeded Warroad will take place on Friday at 1 p.m. at the XCEL Energy Center.