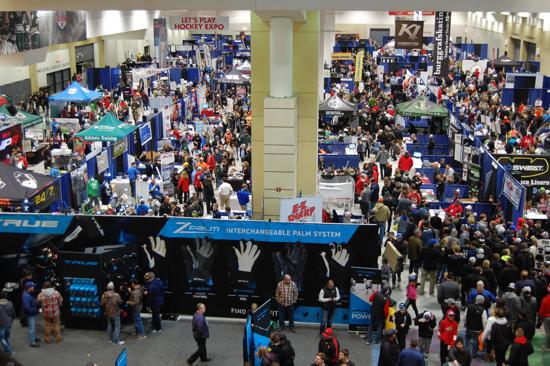 More than 120 vendors at this year's event, plus a new challenge course

The 31st Annual Let's Play Hockey Expo, the world's largest consumer hockey show, returns to Saint Paul RiverCentre March 6-7. Held in conjunction with the Minnesota State High School League's Boys' Hockey Tournament, the Expo is open to the public and offers a sneak peek at the hottest hockey equipment and merchandise, hockey schools and camps, training devices and much more.

There is a $5 admission fee for attendees who are over 18. Tickets can be purchased at the Saint Paul RiverCentre Box Office. Guests 18 and under are still free.

Hockey enthusiasts can check out gear from more than 120 exhibitors, including many companies exhibiting at the expo for the first time. Cutting-edge product demonstrations, giveaways, challenge course, a hockey mom and hockey dad competition, a lounge area to watch the high school games, hourly door prize drawings and celebrity appearances make the Expo one of the can't-miss hockey events of the season. In addition, a hockey memorabilia and sports card show will take place during the Expo. This year there will be several grand prizes given away to Expo attendees who register on-site.

"This year we have set up a fun challenge course that allows for kids to test their skills in shooting accuracy, shooting velocity, passing, stick handling and agility," said Bryan Zollman, owner of Let's Play Hockey. "This will be a fun interactive that kids won't want to miss. We will publish the top kids in each age group in an upcoming edition of Let's Play Hockey and all kids will be eligible to win cool prizes from our sponsors."

Speaking of prizes, grand prizes include a home skate sharpener from Sparx and a backyard rink kit from Nice Rink. Other prizes will include sticks, gear and other hockey-related items.

There will also be a hockey mom and a hockey dad contest.

"We have to have something fun for mom and dad, so we are setting up a couple challenges they can try to win some cool grand prizes including a shopping spree at 24/7Active, a golf getaway package at Breezy Point resort, plus other great prizes."

This year the Expo will welcome several hockey celebrities including 1980 olympians Bill Baker, Buzz Schneider, Steve Christoff, Neal Broten and Mike Ramsey. Former NHL players Tom Chorske and Paul Broten. The On the Bench Guys will be on hand both Friday and Saturday form 1-3 p.m. And the cast form the Mighty Ducks will be signing autographs (ticket must be purchased for this) on Saturday at 2:30. More celebrity signings will be announced in the coming days.